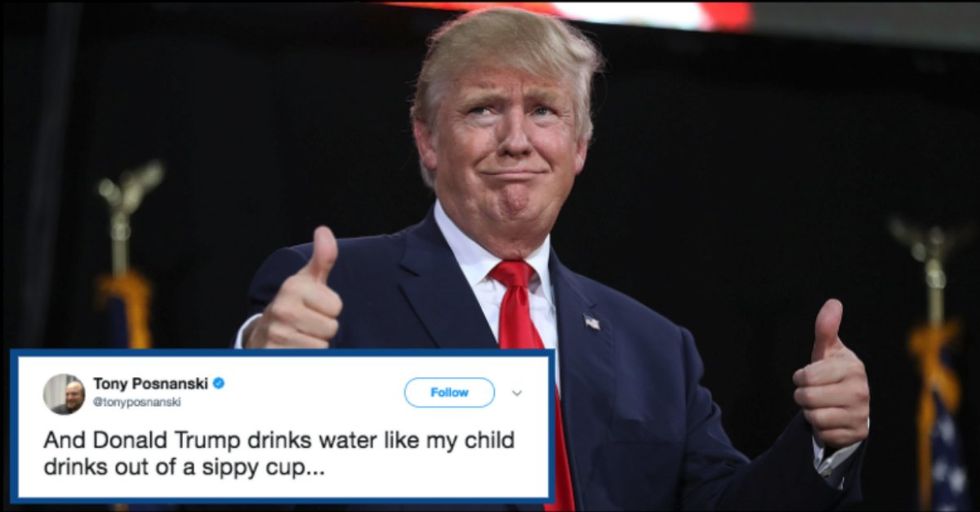 Well, folks, we did it. We reached a point in humanity's existence where the president taking a sip of water from a water bottle is news.

There are a lot of questions we could ask about this turn of events. How did we get here? Why have we let this happen? Could we have prevented it?

But rather than having an existential crisis, let's just focus on how there is a non-zero chance that Donald Trump has never encountered a water bottle ever before in his life. At least, that's kinda what it looks like.

In a speech recapping his Asia trip, Donald Trump paused his speech to take a sip of Fiji water.

And he looked pretty ridiculous doing it (more on that in a second). In order to explain why Trump's water bottle gaffe is in the news today, we're gonna need to do a bit of time traveling. Let's go back to 2013, in the halcyon days before this guy was in the Oval Office.

Back in 2013, Marco Rubio was in the middle of recording his response to President Obama's State of the Union Address when he started to become a bit parched. To solve that, he stooped down to grab a bottle of water:

Oof. That is...difficult to watch. A lot of people gave Rubio a hard time about this awkward beverage encounter. Among them was reality TV star Donald Trump.

Oh! Drinking from a glass! That makes so much sense. In this one very specific instance, Trump's probably the guy to trust. After all, he knows a lot about negative impact.

But that wasn't Trump's only tweet about Marco Rubio's drinking debacle.

Trump's bullying of Rubio wasn't limited to Twitter, though.

During last year's presidential campaign, Trump ridiculously sloshed water from a bottle and exclaimed, "It's Rubio!" He also referred to Rubio as a "choke artist." Very funny jokes here, people. This guy's a real comedian. After years of being made fun of for needing to drink water, Rubio had a response to Trump's own water bottle blunder...

Similar,but needs work on his form.Has to be done in one single motion & eyes should never leave the camera. But no… https://t.co/tdy1kDVdLF
— Marco Rubio (@Marco Rubio)1510779421.0

According to Rubio, the president's form could use a bit of work. We agree. The rest of his whole schtick could use a lot of work, too.

Now that we know it's OK to make fun of someone for the way they drink water (hey, the president did it!), the Internet is having a field day.

He really does resemble a toddler in the way he grabs the water bottle. And with pretty much everything else he does.

Can someone teach Donald Trump how to open a bottle of water and take a sip in a way that resembles a normal human?
— molly (@molly)1510778947.0

Unfortunately, Molly, the answer is no. He can't really do anything in a way that resembles a normal human. (Hey Trump, need some water for that burn?)