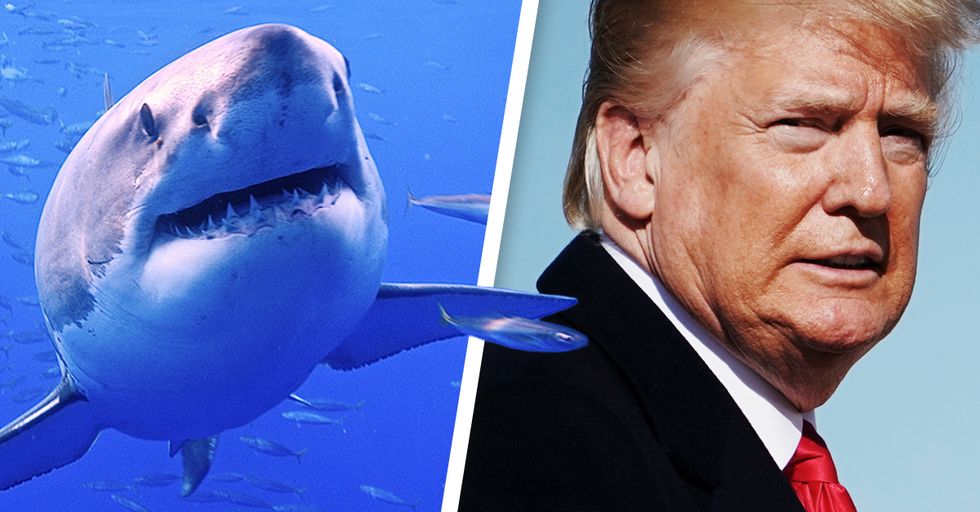 A few facts about the shark:

1. Contrary to popular belief, not all sharks die if they stop swimming.

Some, like nurse and bullhead sharks are very lazy swimmers, perfectly content to lie about on the ocean floor, minding their own business. Others, like the great white, mako, and whale sharks, actually do die when they stop swimming.

In fact, most sharks dislike the taste of humans. We're don't have the nummy deposits of fat they like, as is the case of seals or even delicious sardines. When sharks bite humans, they're usually doing what's known as an "exploratory bite" – tasting to see if something is edible. Usually, they let go at that point. Usually.

3. But there are a couple of types that are out to get you.

About a dozen shark types are considered especially dangerous to humans, and cause most fatalities. Most of them live in Australia, because, Australia. Yes, the great white is among them – as is the bull shark, and the tiger shark... No, whale sharks won't eat you. Stop asking.

4. Sharks do get cancer.

Doesn't matter what that sketchy nutrition store says, sharks get all types of benign or even malignant cancers, so don't go eating shark cartilage or supporting anyone who does. Shark cartilage and fin fishing has decimated shark populations, leading to their collapse. This is especially important because sharks are apex predators, and they are important for maintaining the health of their ocean environments.

This month, InTouch magazine released a 2011 interview it had done with Daniels, real name, Stephanie Clifford.

Daniels, who is alleged to have had a nearly year-long affair with Trump four months after the birth of youngest son, Barron, said that during one of her dinners with the President at his Beverly Hills Hotel room, a Shark Week episode was playing in the background.

Trump was reportedly fascinated by the episode... and disgusted.

In the interview, Daniels explained:

He is obsessed with sharks. Terrified of sharks... He was like, 'I donate to all these charities and I would never donate to any charity that helps sharks. I hope all the sharks die.' He was like riveted. He was like obsessed. It’s so strange, I know.

After this detail emerged, people have been showing their disgust for Trump in the most epic way they can. They've been giving to charities supporting sharks.

In fact, one anonymous soul adopted a shark and named it after Trump.

"I think it was a jab at President Trump after that article," Marie Levine, the executive director of the Shark Research Institute in Princeton, told the Asbury Park Press.

The shark is named Lola and was estimated to be 13-feet long by researchers who photographed the animal off the coast of Guadalupe Island, Mexico.

Many of these contributions are specifically marked in Trump's honor. One even had the message, "Because Trump," attached.

According to the BBC, Trump's hatred of the marine animals has been a boon to conservation groups. Many contributors are new donors, and a few are even from outside the United States. As Atlantic White Shark Conservancy chief executive officer Cynthia Wilgren explains, "It can certainly be a challenge to raise money for a species that most people fear... We have been receiving donations in Trump's name since the story was published."

While all this is amazing, there's one thing we shouldn't forget.

The oceans are dying at a pretty aggressive rate. Climate change is causing coral bleaching, massive fish migrations and ocean acidification. Immortal jellyfish are even taking over the oceans because of all this – no, really. So while donations are lovely, they're only part of the equation. Let's do what we can to protect the ocean and all its wildlife, including sharks. You know, for Trump's sake.