Donald Trump Jr. Just Told Everyone to Vote on the Wrong Day | 22 Words 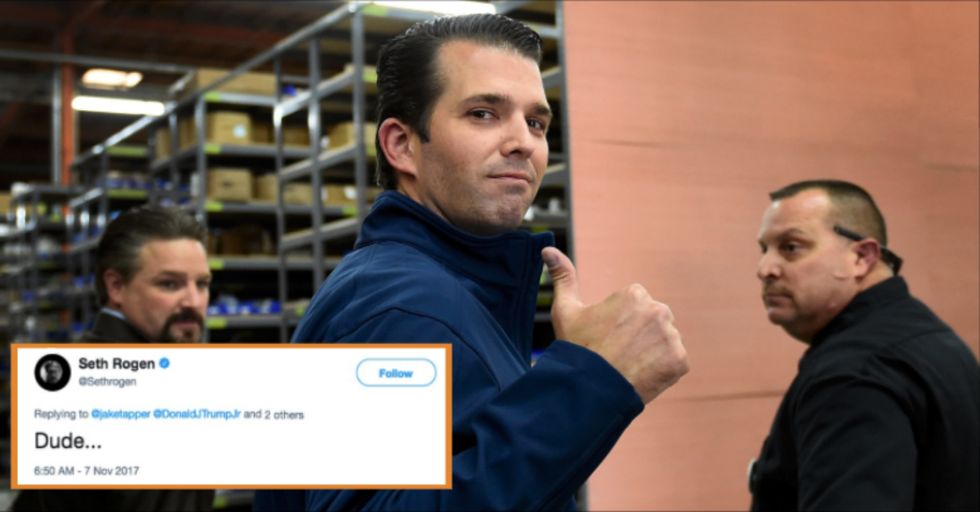 Donald Trump Jr. Just Told Everyone to Vote on the Wrong Day

Happy Election Day, everybody! It's time to get out there and perform your civic duty. Your vote matters, your voice matters, and you can make the world a better place!

Orrrrrrrrr, if you're Donald Trump Jr., happy Regular Tuesday! It's just a Tuesday and there's nothing special about today, apparently! Woo! Tuesday!

This morning, Donald Trump Jr. appeared to get his days a little mixed up. We get it. Days are hard.

Early this morning, Trump Jr. tweeted his own "get out the vote" message. There was just one problem.

CNN correspondent Jake Tapper was kind enough to point out the error:

Much to the chagrin of everyone who's not planning on voting for Gillespie and the "entire GOP ticket." Maybe those people actually should wait until tomorrow to vote.

Everyone started roasting Trump Jr. for his mistake. Even celebrities!

Trump Jr.'s longtime Twitter bestie/troll extraordinaire Seth Rogen couldn't resist getting in on the story, too. Dude, indeed. How do you mess that one up? Just look at a calendar! Or your phone! We all have calendars on our phones now!

To be fair, Trump Jr. has a lot on his plate right now.

Like the possibility of going to prison, for instance. Or maybe he's still reeling after his doozy of a Halloween costume.

A few hours later, Trump Jr. shared another tweet with the correct Election Day info (i.e., that it's today).

He even wrote it in all caps to show that he really means it. Like father, like son.