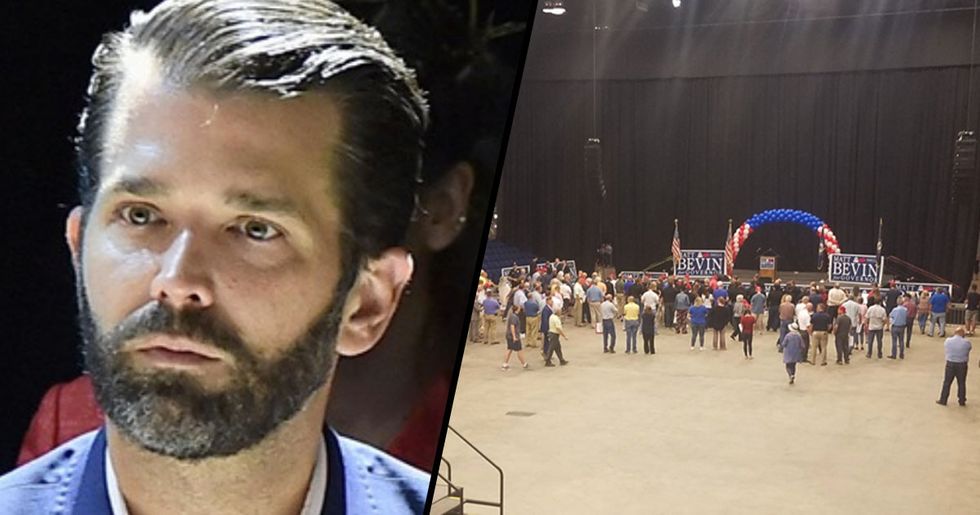 Donald Trump Jr. is the eldest child of Donald and Ivanka Trump and is often seen imitating his father's beliefs and promoting the Trump ideologies on Twitter.

Earlier this week, Don Jr. was speaking at an event in Kentucky in support of Republican governor, Matt Bevin, who is up for re-election from the state's Attorney General, Andy Beshear.

Prior to the event, local press reported that they expected a "memorable turnout" for the forty-one-year-old son of the president. That being said, photographic evidence from the event proved that Trump Jr. is not quite as popular as he was expected to be.

Considering some of the points laid out by Don Jr. during his speech, I'd say that he was pretty lucky that no one showed up. From denouncing climate change to making cheap jibes at Obama - coming only a day after he was questioning Bernie Sanders' masculinity on Twitter - I'd say that this really was an event worth missing. It got even worse when Don Jr's girlfriend, Kimberly Guilfoyle, took to the stage making claims that "nobody blows up the snowflakes on the left like Donald Trump Jr."

Lord, give me strength.

So, for those fortunate enough to miss Donald Trump Jr.'s pitiful visit to Kentucky, here's what went down...

You could say that Don Jr. has had a difficult year...

Having been an integral part of his father's presidential campaign, the billionaire tycoon's son, is in pretty deep water. This year, it has surfaced this year that Trump's tactics were less than honorable.

Don Jr. is currently under investigation by the United States' attorney for the District of Columbia for his role in his father's inauguration.

Along with his siblings, Ivanka and Eric Trump, Don Jr. has been under investigation since May this year.

Twitter has proved the ideal platform for Don Jr. to spread his poisonous propaganda...

On Wednesday, he tweeted an out of context video of presidential candidate, Bernie Sanders, and used it to question his masculinity and whether or not he would be able to negotiate with world leaders...

Forget about Sanders' twenty-nine years of experience in politics, his honors degree in political science, his work for the civil rights movement (he led the first-ever civil rights sit-in in Chicago), the fact that he is the longest-serving independent in U.S. congressional history, how he has been dubbed the “amendment king" in the House of Representatives for passing more amendments than any other member of Congress, how because of Sanders’ IBM agreed to a $320 million legal settlement with some 130,000 IBM workers and retirees, how he was the first member of Congress to personally take seniors across the border to Canada to buy lower-cost prescription drugs, how he repeatedly stands up against the pharmaceutical companies that are penalizing the average American... I could go on - the amount that Sanders has achieved in his political career could fill a stadium (one bigger than that of the Wireless Arena that Don Jr. spoke at...).

Don Jr. doesn't care about facts, he knows that, if he says something on Twitter, there will be people that will read it and believe him.

Which is probably why he gets on so well with his new girlfriend, Kimberly Guilfoyle, who is a former Fox News presenter...

Take this blatant example of "one rule for them, another for us..."

Don Jr. shared this meme, displaying a crowd of congresswomen being photographed prior to the State of the Union. The meme, along with Trump Jr., questions the congresswomen's patriotism as none of them appear to be wearing American flag pins.

And did Don Jr. and co. wear a pin for the same State of the Union Speech?

Don Jr. got into dangerous meme territory again with this...

The dangers of meme-ing without understanding the basics of how the US government functions. https://t.co/yz0UDAKun4
— Jesse Benn (@Jesse Benn)1550243503.0

I mean, really, what did Don Jr expect when he compared people being "forced" to get free healthcare against being forced to pay for Trump's stupid wall?

We haven't even mentioned Don Jr.'s talks with Russia yet...

Don Jr. straight up lied about what the meeting was about.

Initially, when questioned by the press about the meeting, Don Jr. said that it had been held to discuss possible adoptions of Russian children by Americans... In a statement sent to The Times, he said: "It was a short introductory meeting. I asked Jared [Kushner] and Paul [Manafort] to stop by. We primarily discussed a program about the adoption of Russian children that was active and popular with American families years ago and was since ended by the Russian government, but it was not a campaign issue at that time and there was no follow up."

His statement to The Times was "misleading," to say the least...

For it turned out that the actual reason for the meeting was to get dirt on Trump's opponent, Hilary Clinton - which was reportedly coming directly from the Russian government.

Trump senior hastily tweeted to avert the blame away from himself.

Despite the fact that Trump's lawyers claimed that it was, in fact, Trump senior who came up with the "dictated" story about the Russian adoption garbage.

Oh, sure, everyone gets dirt about their opponents from the Russians...

Trump senior tweeted again in defense of his son claiming "that's politics" - now I'd say that that, sir, is fake news.

You'll note that Don Jr. was careful not to put any pictures of the pitiful Kentucky crowd on his Twitter feed...

If you were to only follow his comings and goings through his twitter feed, all you would see is this retweet from Wayne King. You will note that this photo is not of the actual event... I wonder why?

Perhaps because, if Don Jr. had shared actual footage from the event, he would have looked like a right loser...

Despite the Appalachian Wireless Arena, in Pikeville, Kentucky having a capacity of 7000, only about two hundred people showed up to hear Don Jr. talk.

Those that did attend were asked to move closer to the stage...

How awkward... Although I can understand why. From this angle, you might not even think that there was such a poor turnout. Clever...

If Don Jr. can't draw in an audience, how about his Fox News girlfriend?

Kimberly Guilfoyle stumping for Bevin "that's what Kentucky deserves, the very best." On Trump "is he crushing it,… https://t.co/TmokGIPnth
— Ryland Barton (@Ryland Barton)1567106701.0

I mean, with all of the important political commentary I'm sure that she had to share... golden nuggets like "Isn't Trump crushing it, or what?" and "nobody blows up the snowflakes on the left like Donald Trump Jr," how could she not bring in a crowd? By this "snowflake" comment, I suppose that Guilfoyle is referring to her boyfriend's repeated online harassment of the female congresswomen known as "The Squad..."

It seems as though ridiculing and stirring fake news about The Squad is Don Jr's part-time job.

This is a classic example. Here, we see Don Jr. twisting what is a squad member attempting to defend herself against the malicious bullying against them by the Trump administration into a suggestion that they are anti-Semitic. What a load of codswallop.

Even The Simpsons have caught on to how much Trump's administration dislike The Squad...

In this short released by The Simpson's earlier this week, we see the president distracting himself from his current situation by going after “The Squad" - doing so to the tune of "America" from West Side Story. Amazing.

Who are The Squad ?

The Squad is the collective name given to a group of women of color in Congress that are everything that this country needs and everything that Trump is afraid of. They are the future of American politics and Trump's administration knows it. They are Rashida Tlaib (Mich.), Ilhan Omar (Minn.) Alexandria Ocasio-Cortez (N.Y.), and Ayanna Pressley (Mass.) and they will not be scared off by Don Jr. or anyone else hoping to smear them and what they believe in... which is an America for the people, not run on corporate greed and white supremacist, misogynistic ideals. For more on Trump and The Squad, keep scrolling!

The only constant is change.

If you, like millions of other Americans, are feeling lost at the current state of our politics, remember that the only constant in this world is change. So think about this... Alexandria-Ocasio-Cortez may well run for president one day. And, heck, she may well get elected. Crazier things happened.