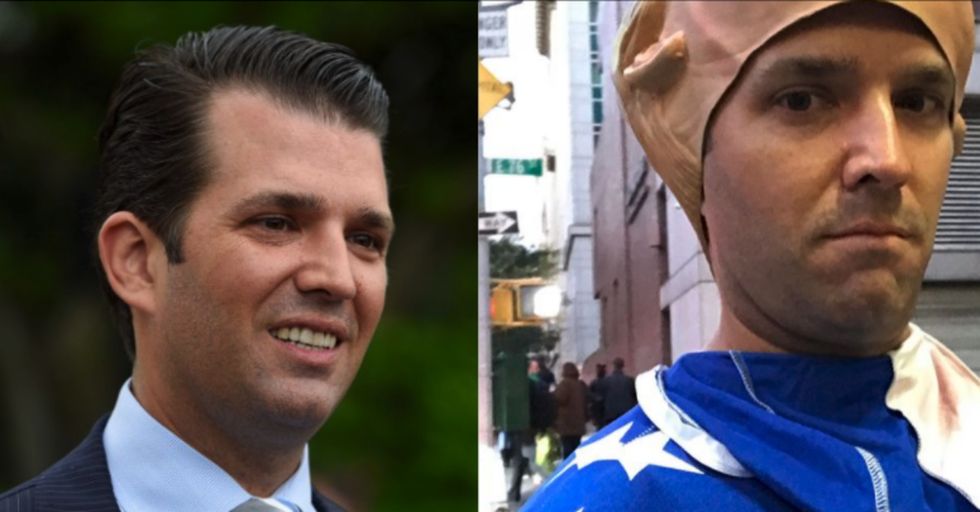 How can you tell whether someone has daddy issues?

Sometimes the signs are subtle. Other times, they're as subtle as a grown man wearing a skin-tight American flag costume and a face of his own father for Halloween.

That's exactly what Donald Trump Jr. did this week, right before revealing his ignorance of the concept of socialism.

We're not psychiatrists or anything, but... this is bananas, right?

Oh, Donald Trump Jr. What has your life been like?

It can't be easy to be Donald Trump's son. Sure, it's probably easier than being Donald Trump's daughter, but it certainly comes with its own challenges.

Apparently, there's only one way to deal with the pressure. And that is dressing up as your father in a skin-tight American Flag onesie.

Yes, folks. That's Donald Trump Jr. He posted several photos of himself in the costume on Instagram. Wow. That is...a lot.

Don't believe it's actually him in there? Here's some proof:

It's true. He wore the whole thing. The flag onesie. The mask. Either one by itself would have been enough, but he went for the whole horrifying enchilada. And here we thought Betsy DeVos' costume was the scariest Halloween get-up this year. We were so, so wrong.

Trump Jr. also posed for several photos with his kids.

It's especially interesting to note Trump Jr.'s costume while the nation is also having some serious discussions about what it means to disrespect the flag. Something tells us that the founding fathers weren't quite prepared for the flag to be made into adult onesies.

Even if their dad was dressed as a weirdo, we hope Trump Jr.'s kids had a happy Halloween and got lots of candy.

As for Trump Jr.? Well, we hope he gets a lot of therapy. It seems as though he might benefit from it.