Donald Trump Jr. Skewered After Using His Daughter in a Halloween Tweet About Socialism | 22 Words 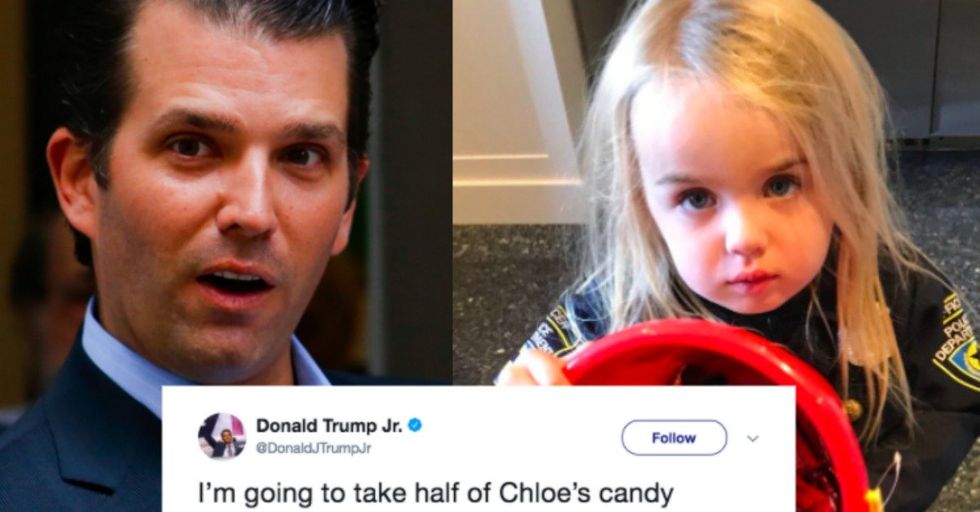 Donald Trump Jr. Skewered After Using His Daughter in a Halloween Tweet About Socialism

We can always count on Donald Trump Jr. for a seriously terrible take! And he delivered in classic fashion on Halloween night by invoking his poor, innocent daughter Chloe and her candy haul in a dumb tweet about socialism. Trump Jr. proved once again that he just doesn't get it, and boy oh boy, the Internet let him have it. It was glorious to watch.

Trump Jr. took to Twitter to post this photo of his daughter holding her bucket full of candy with the caption, "I'm going to take half of Chloe's candy tonight & give it to some kid who sat at home. It's never to [sic] early to teach her about socialism."

First of all, Donald Trump Jr. got socialism wrong. Entirely.

As another Twitter user pointed out, Chloe just went around literally taking handouts. She ended up with all that wonderful candy because of the socialist tradition that is trick-or-treating. Everybody gets a Snickers! That's great, and that's socialism.

Next! Maybe Chloe will end up learning a thing or two from her grandfather, a.k.a. Donald Trump, a.k.a. the President of these Less-Than-Ever United States.

And that might not be such a great thing. Maybe Chloe will learn from her family that all it takes to get to the top is inheriting a buttload of money, treating your employees like garbage, and using your power to lift yourself up and destroy everyone else around you.

Journalist Soledad O'Brien had another idea: "You could TELL her you're donating the candy to charity, but then really funnel 100k of it to yourself. (Ask Uncle Eric about that!)," she wrote.

Here, of course, O'Brien is referring to the fact that Eric Trump funneled donations to a children's cancer organization into the Trump Organization. But Uncle Eric isn't the only member of her family that cheats people out of charity money! If we go back to grandpa, Donald Trump has time and time again promised charity money that never surfaces. He's a big talker and a selfish, greedy taker.

Donald Trump Jr. really screwed up with this tweet. He doesn't understand socialism, or grammar, or how to be a good parent and let his daughter just enjoy Halloween. Nice going, bud.