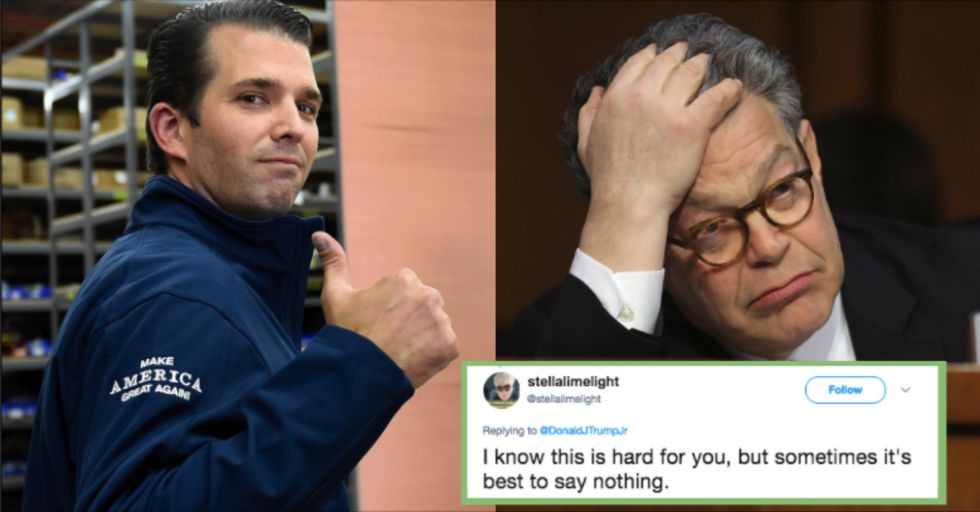 We've learned a lot about sexual harassers this year. Way more than most people bargained for. It seems crazy that Americans elected a known sexual harasser to the Oval Office just over a year ago. But times have changed.

Senator Al Franken has faced several allegations of sexual misconduct and is now officially resigning from the Senate.

Donald Trump Jr. — the son of aforementioned known sexual harasser elected to the Oval Office — couldn't resist taking a potshot at Franken. It did not go well.

Democratic Senator Al Franken has announced that he will be resigning from his position in Congress.

Franken made an emotional speech on the Senate floor on Thursday, December 7, calling it "the day the worst day of my political life."

Franken's decision was made in light of several allegations of sexual misconduct.

KABC anchor: Senator Al Franken Kissed and Groped Me Without My Consent, And There’s Nothing Funny About It… https://t.co/fdC4GkUxV6
— Meridith McGraw (@Meridith McGraw)1510845748.0

Last month, broadcaster and model Leann Tweeden accused Franken of forcibly kissing and groping her while the two were on a USO tour in the Middle East back in 2006. As they were flying back to the States, the above picture was taken after Tweeden fell asleep. Franken kind of apologized for his behavior, saying, "I certainly don’t remember the rehearsal for the skit in the same way, but I send my sincerest apologies to Leann. As to the photo, it was clearly intended to be funny but wasn’t. I shouldn’t have done it."

Since Tweeden shared her story, several more women have come forward with allegations against Senator Franken.

A total of eight women have spoken out publicly against the senator. Some of them have said that he groped them while posing for a picture (à la George H.W. Bush) or tried to kiss them. One says Franken suggested the two of them sneak away to the bathroom together. Franken has responded to some of these allegations (though not all) and volunteered to cooperate with an ethics committee.

At the end of it, he took shots at both Roy Moore and President Donald Trump. Both men have also been accused of sexual misconduct, yet one is the President of the United States and the other may soon be an active member of Congress. 'Cause that's the world we're living in.

Donald Trump Jr. had his own hot take to share with the Internet after Franken's resignation:

In case you're not personally familiar with Senator Franken's SNL oeuvre, Trump Jr. is quoting Franken's Stuart Smalley character who recites daily affirmations. The Internet had a lot to say about Trump Jr.'s "hilarious" joke.

First of all, Trump Jr. didn't even get the quote right.

Rule No. 1 of making fun of someone is: Don't stick your foot in your mouth by botching your dumb joke. By this point, Donald Trump Jr. must be so used to the taste of his foot that he didn't even notice his mistake.

For some people, Donald Trump Jr.'s reaction to the news of Franken's resignation was worthy of little more than an eye roll.

We get it, Don. You have a Twitter account and you can Google "Al Franken SNL." Your time is probably better spent preparing for all those questions about Russia you'll have to answer soon.

Nurse Jackie actor Lenny Jacobson had an even hotter take:

Ziiiiiiing! Looks like Donald Trump Jr. may have to schedule a trip to see Nurse Jackie to deal with those buuuuuuurns!

And of course, many people brought up the fact that Donald Trump (the old one) is still the President of the United States...

...Even though he has been accused of sexual misconduct by dozens of women. In fact, he bragged on tape about behaviors incredibly similar to the ones Franken is now resigning for. But he doesn't seem to be going anywhere. (Yet. We hope.)

And then there's Roy Moore.

Moore is currently running for the Alabama Senate seat but has also been accused of sexual misconduct. In fact, Donald Trump has fully endorsed Moore's campaign. Because, again, that's the world we're currently living in. Things are looking pretty grim, folks.