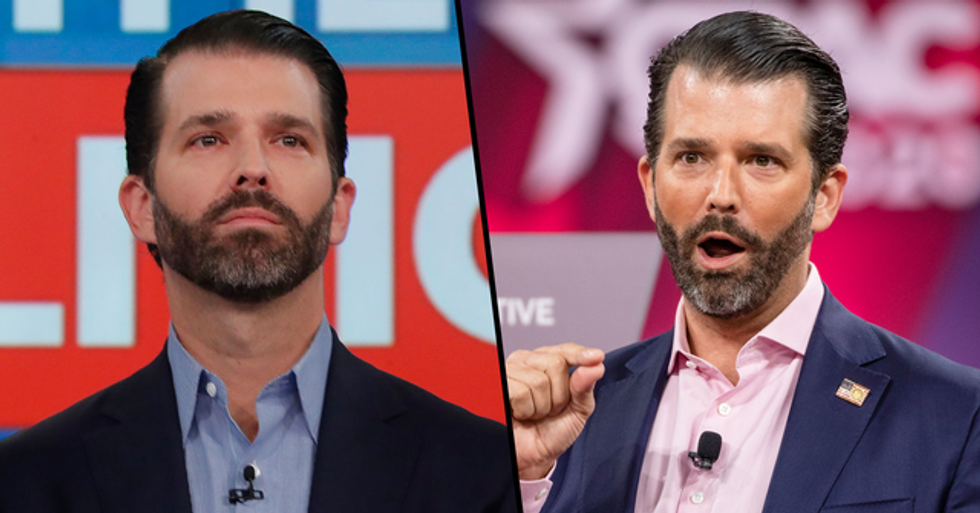 It has just emerged that the president's eldest son, Donald Trump Jr, has been temporarily suspended from Twitter for sharing a potentially harmful video...

The budding businessman has recently come under fire for some unnervingly familiar Twitter activity.

In November last year, he told The Wall Street Journal: "It took me probably forty-one years to realize I was a lot more like my dad than either of us had ever thought. Our default mode is, I guess, attack."

Prior to his presidency, Trump's eldest son had always allowed his sister, Ivanka, to take the spotlight...

Though he had assisted with various business ventures, including the development of Trump Place, Trump Park Avenue, and the Trump International Hotel in Chicago and Las Vegas.

But, in more recent years...

Don Jr. has become an integral part of his father's presidential campaign.

From the get-go, the young man threw himself into the tedious campaign process...

And, for the more recent 2018 midterms, he ended up making more than seventy campaign appearances, according to the Washington Post.

However, things haven't all been plain sailing for the eager businessman.

Because what child of Trump's isn't without their controversy?

Don Jr. has made some pretty problematic statements in his time.

A true chip off the old block, right?

Who remembers his anti-semitic comments back in 2016?

When complaining about recent news coverage, he had said that the media would be "warming up the gas chambers" if Republicans acted like rival Hillary Clinton. The Trump campaign later said clarified his comments were about capital punishment and not the Holocaust.

His stance on Syrian refugees caused an outroar, too.

In one massively controversial tweet, he compared Syrian refugees to Skittles. "If I had a bowl of skittles and I told you just three would kill you, would you take a handful?" the tweet said alongside a Trump-Pence-branded image of the popular candy. "That's our Syrian refugee problem."

And, as you may have guessed, he quite regularly causes a stir amongst the LGBTQ community.

Anyone want to guess why??? This BS will destroy women’s sports and everything so many amazing female athletes hav… https://t.co/o2BVk1RJCn
— Donald Trump Jr. (@Donald Trump Jr.)1571665006.0

He unleashed an angry rant about the injustice surrounding her win, and later tweeted that he was "sorry to all female athletes who spent their lives mastering their games."

He has been sucked into political controversies, too.

In July 2017, he became embroiled in a Russian meeting controversy. The New York Times had reported that he was offered compromising information about Clinton during the presidential campaign by a Russian government official.

He was also involved in his father's more recent Ukraine scandal...

When he Tweeted the name of the alleged whistleblower who first reported concerns about President Trump's attempts to pressure the Ukrainian government into investigating 2020 presidential candidate Joe Biden and his son Hunter.

As you can see, many of these controversies are born on Twitter...

It's a Trump family favorite platform, isn't it?

Don Jr. has always expressed his loyalties to his dad's various policies on the platform...

And this is exactly the reason he has been suspended from the site today.

Yep, Don. Jr has been banned from Tweeting for twelve whole hours today...

How on earth will he cope?!

He just can't post any Tweets for the next twelve hours which, as most of you will know, will be a real struggle for a Trump.

The punishment came amid him sharing a video that discussed the benefits of hydroxychloroquine...

The controversial drug that President Trump has been pushing as a "cure" for coronavirus, despite medical experts suggesting otherwise.

They told the BBC: "We are taking action in line with our policy."

Obviously, users have been having a field day since the news broke...

But many are wondering the same thing... when will the same thing happen to his father? When will he be suspended for spreading harmful and dangerous propaganda about the virus?

For more on his online controversies, keep scrolling...