Donald Trump Jr. Tried to Troll Jimmy Kimmel, and It Did NOT Go Well | 22 Words 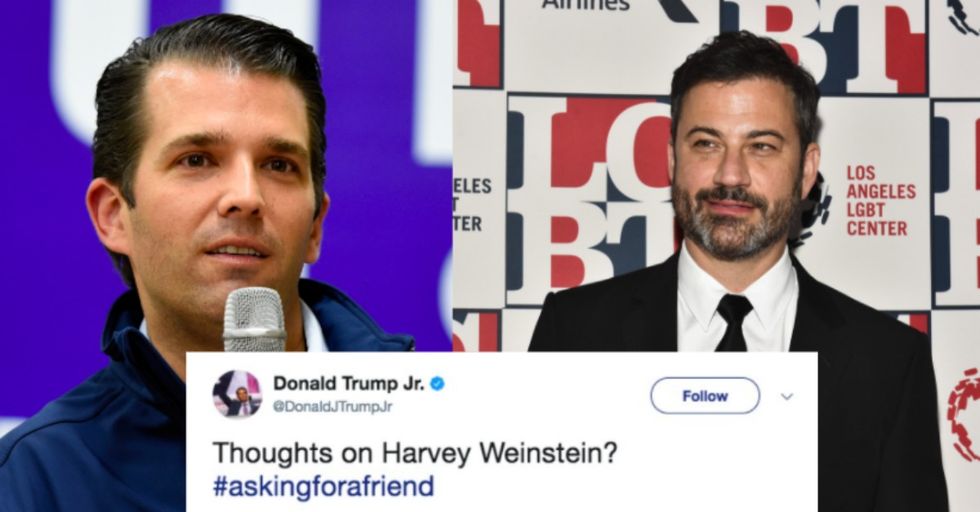 Donald Trump Jr. Tried to Troll Jimmy Kimmel, and It Did NOT Go Well

Since then, Weinstein's been fired from his own company and celebrities have come forward with varied reactions, from shock and disgust to not at all shocked and disgusted it took this long to bring Weinstein down.

Donald Trump Jr. decided to get into the mix and troll Jimmy Kimmel, who's recently used his late-night monologues to passionately discuss health care reform and gun control and yeah, bring up the failings of our president and Donnie Jr.'s dad.

To say it didn't go well would be putting it very lightly.

On October 7, Trump (the president) tweeted about how Republicans should get "equal time" to Democrats on late-night television.

The tweet was bizarre and prompted this response from Jimmy Kimmel: "Excellent point Mr. President! You should quit that boring job — I'll let you have my show ALL to yourself #MAGA" In response, Trump Jr. stepped in and asked Kimmel what he thought of Harvey Weinstein, presumably in a snarky attempt to call Kimmel out for his loose association with a so-called "liberal Hollywood elite" peer who did terrible things (as if people can't be liberal and terrible... Folks, there are bad people on both sides of the aisle).

Kimmel wasn't going down without a fight, so he quoted Trump Jr.'s dad back to him:

@DonaldJTrumpJr You mean that big story from the failing, liberal, one-sided @nytimes? I think it is disgusting.
— Jimmy Kimmel (@Jimmy Kimmel)1507388828.0

The "failing, liberal, one-sided" New York Times, eh? The same "liberal" New York Times that investigated "liberal" Harvey Weinstein? Why would a "liberal" newspaper ever ruin "one of their own"? Oh, maybe because it's not "liberal" after all; it's just thorough.

Trump Jr. attempted to snap back:

Great I look forward to your monologues next week. You're probably due for a change if only for a moment or two. https://t.co/hoEbRApHeT
— Donald Trump Jr. (@Donald Trump Jr.)1507389517.0

Ah, going after Kimmel's monologue material. Very original. Perhaps the reason Kimmel's monologues have been a little repetitive lately is that the government keeps trying to take away our basic rights. Something to think about.

Kimmel had enough, so he tweeted this, dropped the mic, and walked away from the trolling attempt with his head held high:

This, friends, is the full uncut audio of Donald Trump in the Access Hollywood bus. You know, the one in which Trump speaks grossly and candidly about kissing women without their consent and grabbing them "by the p***y." It's a classic. And a conversation killer, apparently. Trump Jr. never responded as he was completely owned and there was no comeback for that.

To be fair, the first late-night host to address the Harvey Weinsten allegations wasn't Jimmy Kimmel. It was John Oliver.

In the October 8 episode of Last Week Tonight, Oliver blasted Weinstein for his non-excuse for his behavior. He cited Weinstein's statement, which read, "I came of age in the '60s and '70s, when all the rules about behavior and workplaces were different. That was the culture then. I have since learned it's not an excuse." Oliver's reply: "Yeah, you're right: Your excuse isn't an excuse."