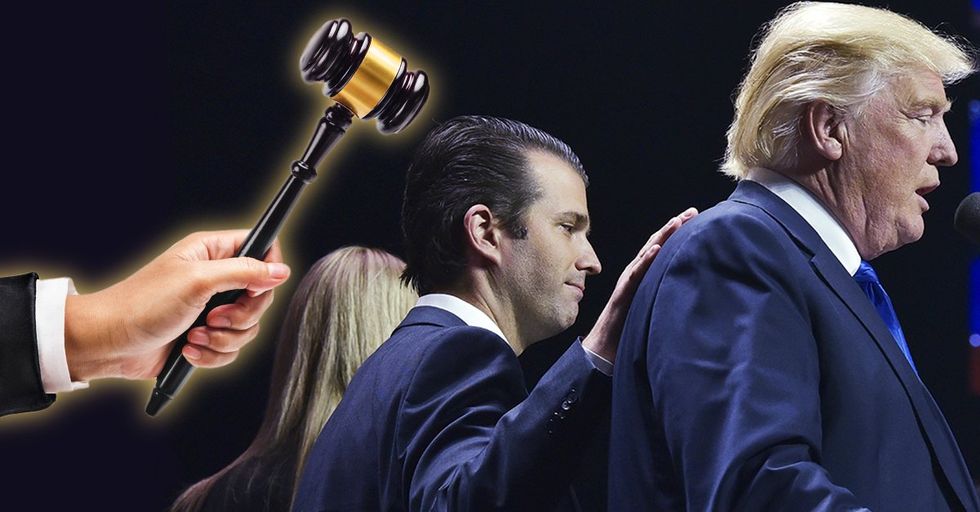 Throughout Donald Trump's presidency, we've seen evidence that he seems to think he can just say something and it is automatically true. Just recently, He insisted that Melania Trump loves her job as first lady even when there is plenty of photographic evidence to the contrary.

It seems as though this habit of saying words and then insisting you're correct runs in the family. Donald Trump Jr. is doing it too.

As you're undoubtedly already aware, this is Donald Trump Jr.

Trump Jr. was born in 1977. He has a degree in Economics from the University of Pennsylvania's Wharton School. He's not a lawyer. (That last fact is important to remember.)

And this, obviously, is Donald Trump.

He was born in 1946. He also has a degree in Economics from the Wharton School of the University of Pennsylvania. He's not a lawyer, either. (Again, keep that in mind.)

And this is Adam Schiff.

He's the U.S. Representative for California's 28th congressional district. Before that, he attended Harvard Law School and got a law degree. He's currently the ranking member on the House Select Intelligence Committee which is currently looking into whether there was Russian interference in the 2016 U.S. presidential election.

Schiff recently met with Donald Trump Jr. to ask him some questions about Russia. He said that Donald Trump Jr. was willing to answer the majority of the committee's questions, except for in one significant area (skip to about 0:55 in the following video to hear his comments):

Neither of the Donald Trumps, the big one nor the little one, are lawyers, but Junior cited attorney/client privile… https://t.co/bLhu38lVmd
— Maddow Blog (@Maddow Blog)1512614149.0

The questions centered around a meeting that occurred on June 9, 2016 between Trump Jr., Jared Kushner, Paul Manafort, and a Russian lawyer. It's a meeting that brought intense scrutiny to the campaign and has left many people convinced that there was collusion between the Russians and the Trumps during the election. According to Schiff, Trump Jr. "acknowledged having discussed the June 9th meeting...with his father, but refused to answer questions about that discussion on the basis of a claim of attorney-client privilege."

Now, just to recap: Attorney-client privilege is something that exists between (you guessed it) attorneys and their clients.

But, as you'll recall, Donald Trump is not an attorney. Neither is his son. As Schiff so diplomatically puts it: "In my view, there is no attorney-client privilege that protects a discussion between father and son." Right. Because such a thing does not exist. People are having a field day with Donald Trump Jr.'s inability to understand what attorney-client privilege actually is.

Surely there must be some privilege that protects these guys, right?

Ahhh yes. White privilege. That's the one. Apparently, Trump Jr. reasoned that because a lawyer was in the room when he and Trump Sr. were discussing the June 9 meeting. But that's not how it works.

There's only one possible place Donald Trump Jr. could have possibly gotten a law degree.

Of course, Trump University didn't actually grant degrees or provide college credits, so that's out. No, folks, what we have here is a classic case of "Guy weaseling out of telling the truth." It's another trick he learned from dear old dad, apparently.

That makes so much sense! He must have just misheard.

On the bright side, people are claiming attorney-client privilege over just about everything now.

Be careful, though. People can also use the "attorney-client privilege" defense against you.

I asked my husband if he ran the dishwasher today. He claimed attorney client privilege
— Sarah Cooper (@Sarah Cooper)1512625593.0

Because everything is made up and words don't matter and no one ever has to face the consequences of their actions! At least, that's what the Trumps want you to think.