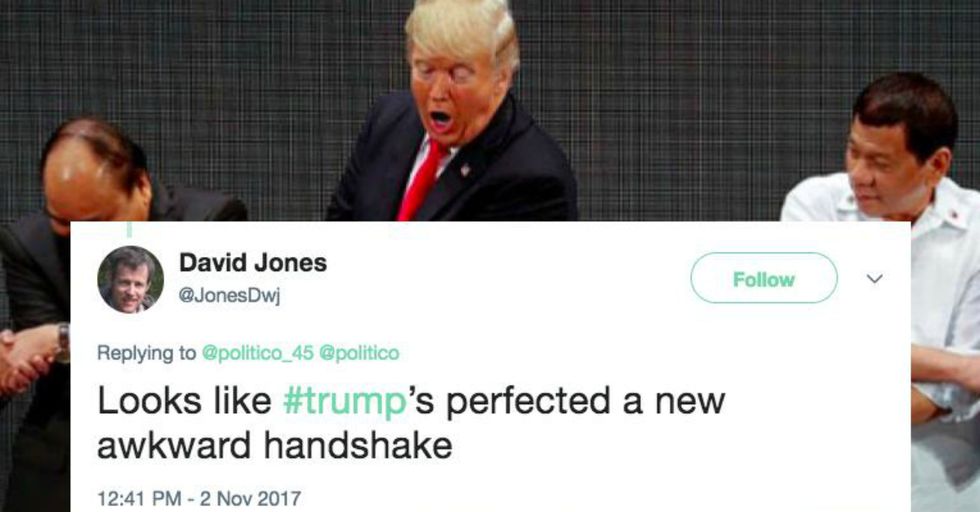 The President's handshake game came under international scrutiny in February when he forced Japan's Shinzo Abe into an awkward 19-second battle of the hands. Soon afterwards, he tried to alpha-dog a handshake with French president Emmanuel Macron, but was forced to retreat after Macron squeezed so tight Trump was left with whitened fingers. Canada's wily Prime Minister Justin Trudeau was prepared for the Trumpshake because when his turn came he used his left hand to balance on the President's shoulder so the President couldn't force him closer.

But what precisely about Donald Trump's handshakes are so alarming?

Well, the first thing is he uses them to jerk the person he's greeting closer, which is not a pleasant thing endure from a 6'2" man of ample girth. He also has a habit of holding on too long, as he did with England's Theresa May, and patting the back of the hand, as he did with countless others.

The second thing is that it's power play.

The Trump-Trudeau handshake has happened. Just look at the power struggle there, Trudeau has been well briefed. https://t.co/MsAEvtTNQ2
— Alistair Coleman (@Alistair Coleman)1487003544.0

Whether conscious or not, the Trump handshake is meant to display dominance. As Joe Navarro, a body language expert and the author of the book What Everybody is Saying explained to Quartz. “When you cover somebody’s hand, you’re portraying yourself as being closer than you really are. It’s for perception management. The only time you should be tapping somebody’s hands is if you’re their grandmother, but certainly not between two grown adults."

Navarro goes on to explain that prolonged handshakes and hand patting can be an invasion of another person's space.

It can make people feel uncomfortable – "Because the back of your hand is your intimate zone. You are entitled to touch the palm of their hand when you shake hands, but not the intimate zone."

Which brings us back to Trump's latest handshake gaffe.

The President has been on a weeks-long trip across Asia, and his latests stop was in the Philippines, where he attended the  Association of Southeast Asian Nations (ASEAN).

When the world leaders crossed hands for a traditional group handshake, Trump floundered.

He obviously wasn't briefed on the intricacies of the regional handshake because he cast about, then grabbed the wrong person's hand, then finally gave a rueful smile as he finally got his handshake in gear. To the President's credit, he did end the whole thing with a smile. Progress, we guess?