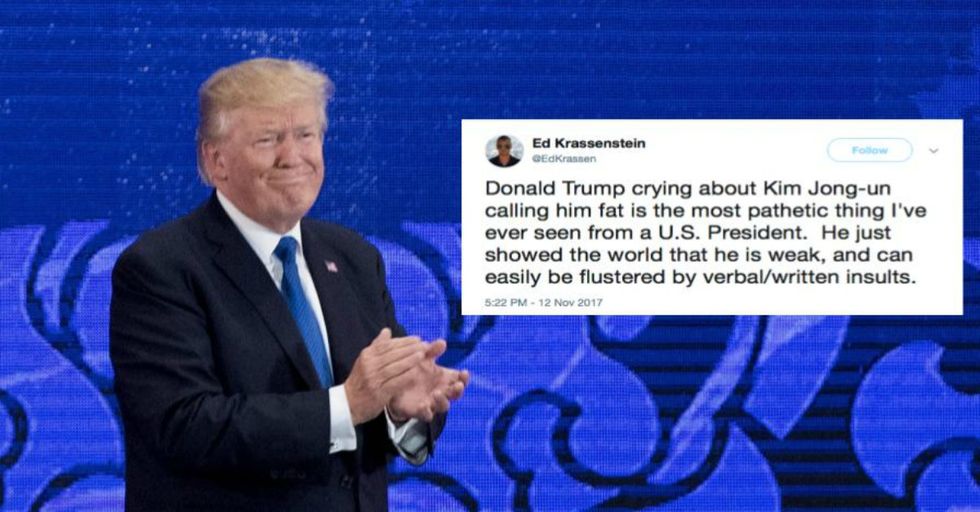 The war of words between Donald Trump and Kim Jung Un continues. Less than two months after the North Korean leader had us reaching for our dictionaries with the word "dotard," which, by the way, is defined by Merriam-Webster as "a person in his or her dotage (a state or period of senile decay marked by decline of mental poise and alertness)" the two world leaders are at it again.

It started, as most things do, with a visit to South Korea.

Trump was in the middle of his grand Asia tour, and he delivered a speech at South Korea's National Assembly, during which he warned North Korea, “Do not underestimate us, and do not try us." The president also tried to visit the demilitarized zone between North and South Korea, but his helicopter was thwarted by intense fog.

North Korea was not impressed by Trump's threats.

"The reckless remarks by a dotard like Trump can never frighten us or put a stop to our advance," the reclusive country's Foreign Ministry responded.

It was the second time in as many months North Korea had lobbied the "dotard" insult at Trump.

In September, Kim Jung Un himself had remarked, "I will surely and definitely tame the mentally deranged US dotard with fire."

This time, Trump wasn't going to take it sitting down.

"Why would Kim Jong-un insult me by calling me ‘old,’" the president complained. "when I would NEVER call him ‘short and fat? Oh well, I try so hard to be his friend - and maybe someday that will happen!"

It was the ultimate backhanded insult. One might even call it Regina George-esque.

how i read all of trump’s tweet in my head. pic.twitter.com/zeAaUBWFaz

The fact that the "Commander in Chief" would tweet this on Veteran's Day tells you everything you need to know about his respect for the military - or even the nation.

Saw Trump's tweet this morning & actually thought someone was making a joke. Should have known that our POTUS would insult an unstable dictator w/ nuclear weapons. Why not, Trump is just like him. pic.twitter.com/tIQcZF34dj

This man is the President of the United States. I literally thought this was a parody when I first saw it. Nope. https://t.co/kQ2dACmWHE

The saddest part of Trump’s dumb tweet is not what he said — it’s that Hannity thinks it’s a sick burn. pic.twitter.com/dmBSTLAvsR

This is a real tweet. Donald Trump is an idiot. We're all going to die. Sleep well. pic.twitter.com/i0YTj7xJS3

Everyone please report Trump’s tweet.@Twitter-he is endangering the lives of innocent people in multiple countries via your platform. You have to at least suspend him. https://t.co/AxVIaw3oIq

The most nutso part of this unhinged tweet is that Trump actually turned on geotagging to prove he was in Vietnam. pic.twitter.com/Vq1NHaNfrw

The response of the president's spokespersons made it even worse.

Kellyanne Conway, the president's primary talking head and a White House counselor, opined on an interview with ABC News, "I think that was the president just responding the way he does to somebody who insulted him first." Say what now?! She's talking about the leader of the free world, ladies and gentlemen. Oh, wait, apparently, that's now Xi Jinping of China.