Donald Trump Tried to Make a ‘Wayne’s World’ Joke, and It Did Not Go Well | 22 Words 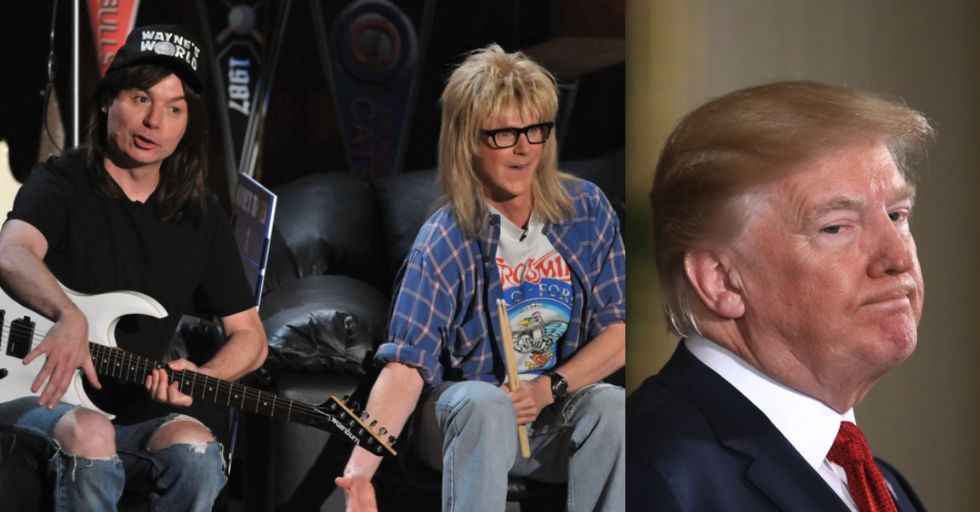 Donald Trump Tried to Make a ‘Wayne’s World’ Joke, and It Did Not Go Well

Donald Trump has been trying to perfect the "not" joke for months now. You know that joke construction. It was popularized by Wayne's World and you constantly used it against your siblings when you were a little kid. ("Hey, this candy bar is for you. NOT!")

Well, Trump has tried to use it several times, and it's actually gone pretty well!

About a month before he was sworn in as President of the United States, Trump was tweeting terrible "not" jokes about President Obama.

It was a really professional move, and he impressed a lot of people with his outstanding comedic chops. Not.

Trump tried the joke format again yesterday. While ranting on Twitter and trying to distract the American people from the indictments in Robert Mueller's Russia investigation, he wrote this:

"Is this coincidental? NOT!" he tweeted, which totally makes sense and is a perfect example of how to use this joke structure that isn't at all juvenile or outdated. NOT. Obviously.

The joke was so bad that Wayne himself can't even look it (the joke) in the eye.

Wayne's World came out 25 years ago, and before that, it was a sketch on Saturday Night Live. The "not" joke has lived, has died, has been resurrected, has been killed again, and now its mangled corpse is being dug up by the President of the United States. It's not a good look.

Comedian Kumail Nanjiani had a note for the president's joke:

Seth Rogen came to the defense (not!) of the "not" joke with this response to Nanjiani:

Whether or not Donald Trump gets decades-old joke structures right, at least we can all agree that trying to craft childish takedowns of his "enemies" is a great use of the president's time. Not.