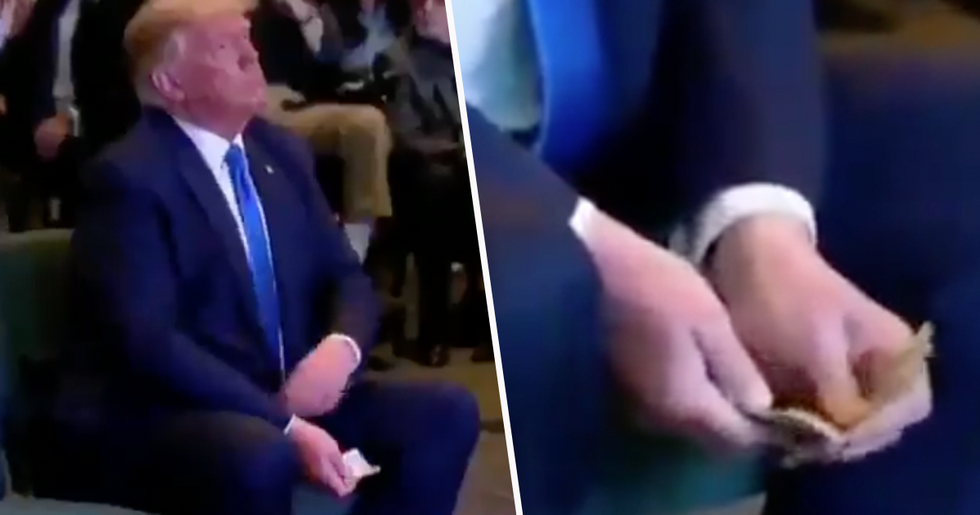 Over the weekend, President Trump evidently had a rare moment of charitability...

As he was pictured putting what seemed to be a very large wad of cash into a church collection box.

I know, it seems a bit out of character, doesn't it?

Well, most of the time they don't.

Yep, some people aren't too convinced by the president's random act of generosity...

And many believe there's a little more to the candid snaps than initially meets the eye.

So, of course, Trump is trying to salvage the little reputation he has left.

Because, as you will all be aware...

It seems that he has some serious competition from his Democratic rival, Joe Biden - although Trump probably wouldn't admit that himself.

But it has been powering on ahead... Despite many major setbacks.

The first presidential debate was held on September 29th in Cleveland.

And in the weeks running up the debate, he attempted to cast doubt over Biden's abilities, claiming that he was suffering from dementia and that he was taking performance-enhancing drugs. Trump even requested Biden to take a drug test before the debate.

Both Trump and Biden seemed to have a field day throwing insults at one another and calling each other out.

And the people of America had never before felt so disheartened in the run-up to an election.

In the days following his diagnosis, Trump continued to insist on how he was "feeling better than ever."

The virtual debate that was scheduled to go ahead on the 15th of October was officially canceled due to Trump's refusal.

For some reason, the proposition of a virtual debate infuriated the President and he boldly said he "wouldn't waste his time" on it.

So instead, Joe Biden participated in a Philadelphia town hall forum moderated by ABC's George Stephanopoulos...

And in typical Trump fashion, the President announced at the last minute that he would hold his own town hall forum in Miami at exactly the same time, hosted by NBC.

The whole campaign process has been nothing short of shambolic.

So it wasn't surprising this weekend to see Trump attempting to salvage that last bit of respect from potential voters.

But it was in a slightly different way than usual.

Instead of shouting down reporters or making inflammatory claims about his Democratic opponent, Trump was seen actually donating money to a Las Vegas church.

Trump went along to the high-energy International Church of Las Vegas for the service yesterday...

And joined in with the musical service-turned-campaign rally with full gusto.

And, as the church's donation bucket was passed around...

The president was seen putting what looked like a handful of $20 bills into the box.

How much money is that, Donald?

But, of course, many are questioning the authenticity behind the president's act of generosity.

Some people can't see the issue with his act of kindness - the president can still donate to a church without having malicious intent, right?

You can see the video of his controversial donation here.

WATCH: President Trump gives money during services at the International Church of Las Vegas. https://t.co/ZJIKpHm2Sr
— The Hill (@The Hill)1603051260.0

What do you think? Was the president being genuine with his charity? Or was the whole thing a publicity stunt?