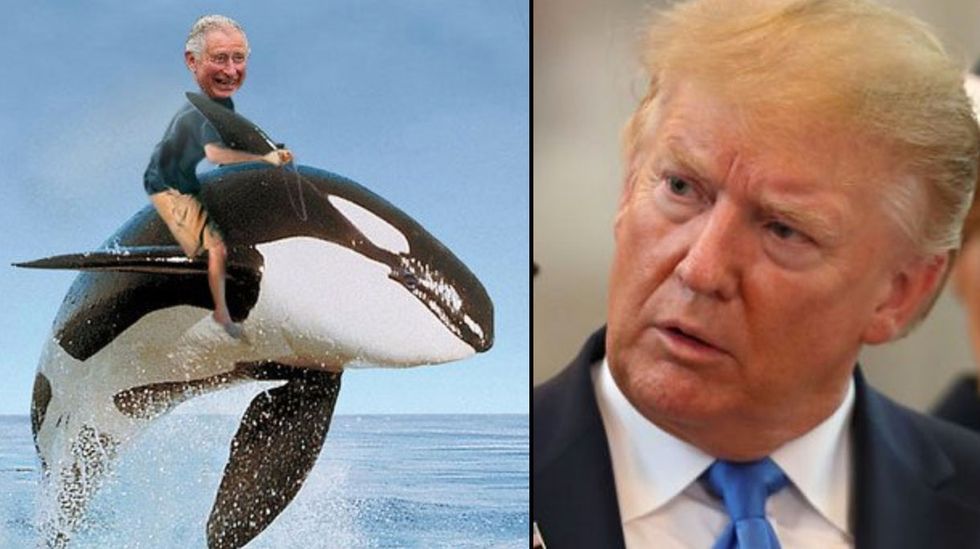 Donald Trump Said He Met the Prince of Whales, Immediately Deletes It

Donald Trump's Twitter page. It's a wonderful place, isn't it? Considering that our President can't seem to go a single day without tweeting something controversial, offensive, or just plain stupid, it's always guaranteed to be an entertaining spot.

And, ladies and gentlemen, he's only gone and done it again.

This particular screw-up has been done in spectacular Trump fashion, might we add. The President, just yesterday, sent a tweet out that bragged about his success with foreign governments and his close relationship with powerful world leaders. All seems normal so far, right?

Well, eagle-eyed Twitter-users spotted an embarrassingly obvious typo, making us Americans far and wide cringe in despair. How he messed this one up, we do not know.

President Trump has always being a bit of a blabbermouth online.

Trump has famously enjoyed voicing every single thought and opinion that pops up in that peroxide-blonde head of his.

He doesn't care who he offends.

While en route to the UK for his first official state visit, Trump didn't waste any time in publically bad-mouthing the "dumb" and "incompetent" Mayor of London and Mayor of NYC. Double whammy.

Rival politicians often take the brunt of his ramblings.

Because, apparently, a politician's physical strength is massively important, guys.

He isn't afraid of insulting the dictators, either...

Even Kim Jong-un, the notorious leader of North Korea, wasn't safe from Trump's online rampage. Though our advice to the President would be: Don't go around calling Kim Jong-un fat. Just don't do it.

When he isn't insulting powerful leaders...

He's complimenting himself. Of course. Who can forget the time that he referred to himself as "like, really smart"? Stay classy, Donald.

Though we sometimes question this apparent smartness...

Remember when he stated firmly that the Moon is a part Mars? Yeah, so do we...

With daily Tweets updating followers on the President's activities, whereabouts, and general musings, quality content is a guarantee.

And his latest Twitter mishap may be his best yet.

It's pretty funny, we have to admit. Much to the internet's delight, the President never seems to learn from his previous online mistakes.

Don't they all? Yesterday, President Trump sent out a passive-aggressive tweet in response to a recent interview. It seems like a regular day on the President's Twitter page so far, doesn't it?

The tweet came with a reference to his first official state visit to the UK.

In typical Trump fashion, he was tweeting (or showing off) about his impressive connections and relationships with the likes of the Royal Family, the Prime Minister of Ireland, and the Presidents of Poland and France.

The tweet was actually in response to some unsavory claims that he made in a recent interview.

In this interview, Trump reportedly suggested that he wouldn't necessarily alert the FBI if a foreign government offered him information about a rival in the 2020 presidential election. Which, as we all know, is illegal.

Okay, we know that you're itching to see the tweet itself...

There it is. The incriminating tweet, in all its glory. Even though the tweet was hastily deleted, Twitter-users rose to the occasion, taking quick screenshots of the typo. Not all heroes wear capes...

Yes, as in the giant mammals that live in the ocean.

"….call the FBI about these calls and meetings? How ridiculous! I would never be trusted again. With that being said, my full answer is rarely played by the Fake News Media. They purposely leave out the part that matters." Sadly, there were no marine-life references in this one.

And the internet has responded accordingly.

Because these things wouldn't be half as funny if it wasn't for the memes, right?

The literal Prince of Whales.

Maybe Trump was right all along?

This one had to be done.

Admittedly, we would love to see the President in a scuba suit.

Though a whale isn't quite as aesthetic as a dragon, is it?

And the puns were just excellent.

As much as we love his hilarious tweets and typos, the number of them is getting slightly out of hand. Maybe use spell-check in the future, Mr. President?