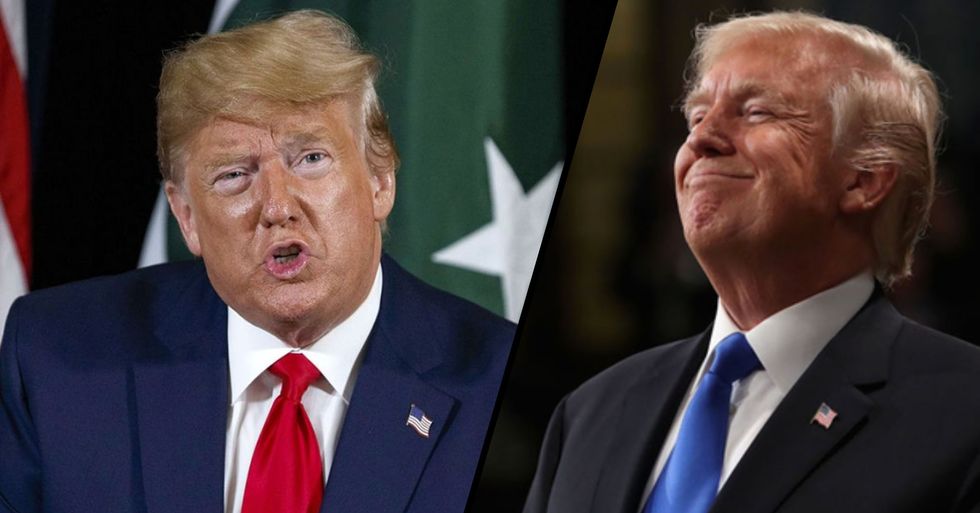 It's no secret that President Donald Trump has been one of the most controversial figures in political history. I mean, from his inexperience in the world of politics to his controversial policies, Trump has taken us all on a whirlwind of a journey in his first term. And with expert projection models predicting that he may be on his way to winning a second term in the Oval Office, things might only just be getting started.

Public opinion is divided when it comes to our president, and the President of the United States himself seems to be aware of this. But, obviously, he's got his own opinions that he's not afraid to share. Apparently, he thinks he deserves a Nobel Peace Prize... wait for it... for "a lot of things."

It seems like our President just can't help himself...

When it comes to spewing trash, there's no one that does it better than Donald Trump.

So why exactly do people hate Trump so much?

You have to give him some credit because unemployment figures have decreased since his reign began, but other than a few positive economic points, everything else is slowly going downhill. According to Thought Catalogue, the reasons that some people hate Trump are also the reasons that other people love him. We've included the reasons below so have a read and see if you agree with any of them, and, yes, there are some great Trump gifs included.

1. He says he wants to “Make America Great Again."

This is what he claims, but, I mean, it's pretty hard to believe that this is what he actually wants with his actions an' all. It seems as if he wants to return to an America that was openly racist, sexist, homophobic, and xenophobic. Why would you want to reverse all of the progress that the country has made since those days? It's a slap in the face to all of the activists who have fought for our freedoms.

He was born rich and will die rich. A President who has never had to struggle financially a day in his life will never understand those working-class individuals who have worked their entire lives to just about put food on the table for their families. It's sad to see that the rich only get richer while the poor are left to get poorer.

Pretty much everything that President Trump says or does to marginalize or hurt people falls under this bracket and, trust me, there are many things. From the Travel Ban to constantly making jokes about disabled or underprivileged people, this President seems to lack compassion, an important quality in a leader.

4. He says disrespectful things about women.

This is the man who called Hillary Clinton and Megan Markle "nasty," and then denied it. The man who rates women on a scale from one to 10 like he's still in middle school, and the man who constantly belittles women with crude comments about their appearances. It's not the impression that he should be making, especially to little boys growing up. And don't even get me started on the sexual assault claims against him... Despite all of this, 40% of women, mainly white, of course, voted for him. Shameful.

"Guns don't kill people. People kill people." That's not good enough anymore. Even after everything that's happened in America in recent years, from the school shootings to the high-profile mass shootings that have taken place, Trump hasn't thought to make the laws around owning a gun stricter. How many more innocent lives need to be lost before he understands that this is an area of concern for the American people?

7. He obviously thinks quite highly of himself.

What we don't need is an egomaniac who threatens nuclear war because someone hurt his little feelings. We need a leader that will actually put the people before himself and will make changes that are going to positively impact the country as well as the world.

Those are only some of the reasons that people dislike Trump, but there are many others.

And every time he opens his mouth, we are granted with yet another reminder that he's a dangerous man, not fit for the role that he accidentally found himself in.

Remember when he almost started a nuclear war?

Oh, those good times. The feud with the dictator from the East left us reeling in fear. But, thankfully, that died down after an unnecessary spat on Twitter. How else do you expect world leaders to air their dirty laundry? God!

And when he said that he is the "worst-treated president of all time," even worse than Lincoln...

Hm... Lincoln was assassinated, is Trump aware of that? Even the interviewer had to stand against that by stating that every President complains about their media coverage, so Trump is no different. Rather than complaining, just stop saying the wrong things. Just a little piece of advice, Mr. President.

But he's back at it again, guys.

I find myself saying this a lot, but out of all the weird things our president has ever said, and trust me, there have been many, this one has got to top them all.

A goddamn Nobel Peace Prize. For those of you that don't know, this is an award that is given to those people that have changed our society for the better.

Let me remind you of some of the previous winners, so it will put things into perspective.

Firstly, we have Nelson Mandela. Who hasn't heard of Mandela? He's a revolutionist that fought for black rights throughout his lifetime.

Then we have Malala Yousufzai, who was shot in the head while fighting for education.

Members of the Taliban boarded her school bus and shot her while she was on the way to school. By God's grace, she survived and continues fighting for her cause.

And who could ever forget about Barack Obama?

In 2009, the former President of the United States was awarded with a Nobel Peace Prize for his work. In a very humble speech, he admitted that he had no idea why he got it. "Compared to some of the giants of history who have received this prize — Schweitzer and King, Marshall and Mandela — my accomplishments are slight..."

Unlike Donald Trump, who insists he deserves one...

After a meeting with the Pakistani Prime Minister, Imran Khan, he said this: "I think I’m going to get a Nobel Prize for a lot of things, if they gave it out fairly, which they don’t."

And, obviously, he wouldn't be himself, if he didn't mention Obama.

He went on to slate the former president as he often does saying: "Well, they gave one to Obama immediately upon his ascent to the presidency and he had no idea why he got it. You know what, that was the only thing I agreed with him on."

Let me point out, none of the reporters asked him about Obama, he just wanted to throw that in there for good measure.

Trump's obsession with Obama is the least of our worries as of right now. This man actually thinks he is deserving of a peace prize! The operative word being "peace."

The former president received the award for this:

In its announcement, the committee said Obama deserved the award "for his extraordinary efforts to strengthen international diplomacy and cooperation between peoples," and pointed out his "vision of and work for a world without nuclear weapons."

A man who threatens to incite mass nuclear destruction, who bans Muslims from their homes, who splits up families at the border. I don't think it's going to work out.

And the whole of Twitter seems to agree with me.

"Whining" is putting it nicely.

This is precisely the reason why Greta Thunberg is nominated...

Donald Trump must be the only person in history to state they deserve the Nobel Peace Prize - shortly after bullyin… https://t.co/9WQ8kliU8g
— Stu Cameron (@Stu Cameron)1569324858.0

And you, Mr. President, are not.

Because there was nothing worse than treason back then. Can someone just impeach this guy already? And if you don't believe me or Twitter, take a look at what Brad Pitt has to say about the President of the United States. Spoiler alert: It ain't positive.