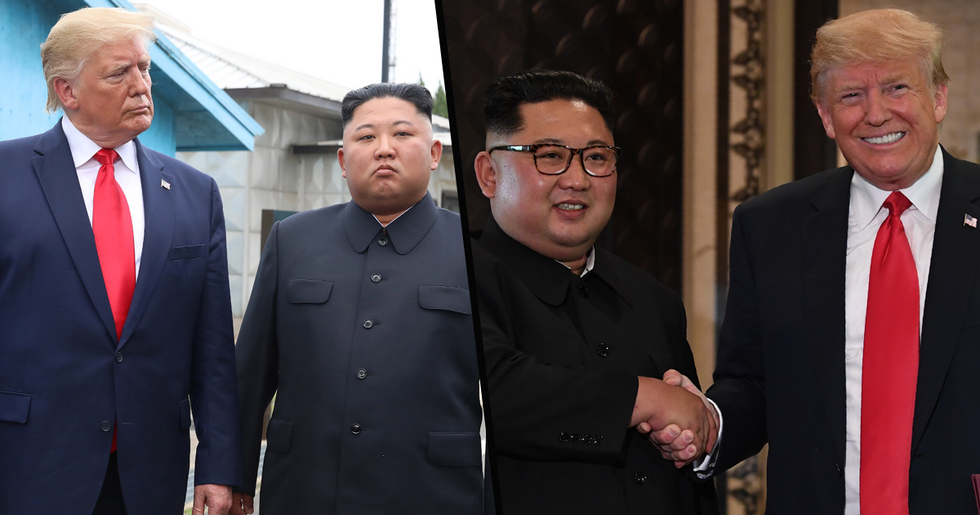 Amid Kim Jong Un's concerning health rumors, President Trump has announced that he knows the truth behind the dictator's health, but he won't be spilling the beans anytime soon...

Donald Trump knows all the secrets of the world.

Well, according to Donald Trump, he does.

There isn't much that the President doesn't claim to hold some sort of superior knowledge on...

Whether it be his impressive skill of identifying which newspapers are "fake news", to his expert medical knowledge on how to cure a deadly virus (note: disinfectant is not an effective remedy for any virus. Period).

But now, he is claiming to hold knowledge on something of a whole new level.

At a recent press conference, Donald Trump hinted at some inside information regarding the current health situation of North Korean dictator, Kim Jong Un.

President Trump prides himself on being the first sitting American President to ever step foot, by invitation, inside of North Korea, where he sat in on a fifty-minute meeting with the notorious dictator himself.

Tensions have long been high between the U.S and North Korea...

And, boy, does he like to remind us of it.

Upon arrival back in the U.S, the President showered himself with praise and credited himself for the prevention of any potential wars with the volatile country.

But this achievement is yet to be made evident...

And now, even bigger news regarding Kim Jong Un is currently dominating the headlines.

Over the weekend, most of you will have heard rumors of the sudden "death" of North Korean dictator.

His supposed death was controversially leaked.

The vice director of a Hong Kong-backed news channel, who is apparently the niece of a Chinese foreign minister, let the news slip on Weibo. Posting to her fifteen million followers, she revealed that a “very solid source" had confirmed Kim’s passing following his heart surgery.

Reports have been suggesting that Kim hasn't been in the best of health in the last for some time now.

Rumors about the dictator undergoing major heart surgery had been emerging prior to this supposed development, so not everyone was too surprised.

But, of course, North Korean officials have profusely denied these rumors.

North Koreans have condemned the rumors and have stated that the health of their country’s leader is fine.

Even the South Korean government have weighed in on the reports.

But, despite South Korea urging that the North Korean leader is “alive and well", his health status still remains unclear.

Various stories and reports continue to conflict with each other.

While Koreans stress that their leader is alive, other news outlets and sources stand by their original claims that he has, in fact, died.

There was even a photograph that apparently showed Kim in his "glass coffin"...

Now, this is controversial. Thoughts?

Speculation continues to rage on...

And, with no sign of the truth in sight, none other than Donald Trump has come to the rescue (kind of...).

President Trump has, of course, weighed in on the controversial topic.

You'd think that with their "special relationship", the President would be the first to know if anything had happened to the dictator, right?

Well, he has heavily hinted that he does indeed know the truth behind all the rumors.

But he isn't going to tell any of us what it is. Of course.

At his most recent press conference, the president was quizzed on Kim's health status...

In which he gave an incredibly cryptic response.

As reporters clamored for his opinion on the matter, Trump responded by saying:

"I can’t tell you exactly. Yes, I do have a very good idea, but I can’t talk about it now… I hope he is fine. I do know how he is doing, relatively speaking, we will see, you will probably be hearing in the not too distant future." Am I the only one who thinks that he doesn't sound too confident?

You can listen to his reply for yourself here.

I'm sure the truth will unravel in the coming days...

Now, this isn't the first time President Trump has said something a little controversial in his press conferences...

And it certainly isn't the worst. Keep scrolling to read about the potentially dangerous advice he dished out regarding remedies to the ongoing medical pandemic...
20%