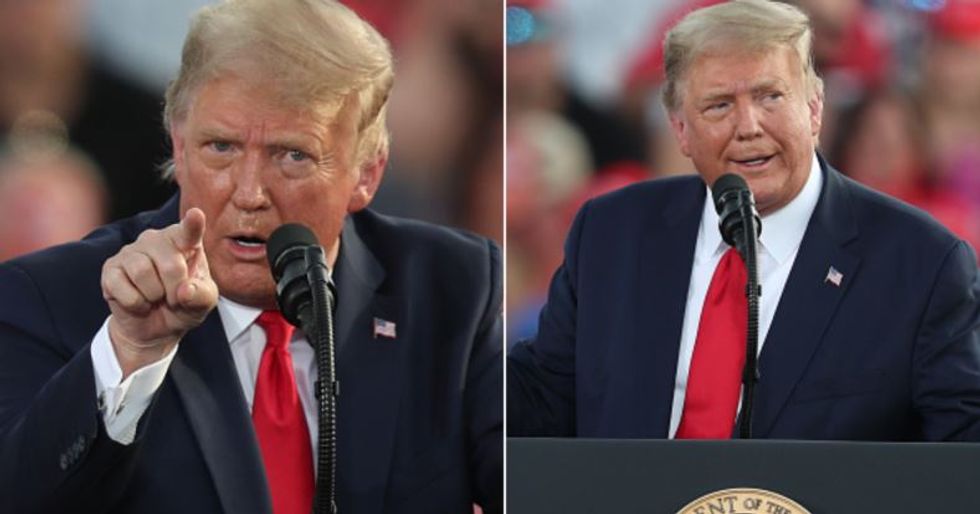 Donald Trump has made a pretty huge claim at his most recent rally in Georgia - stating that if he loses to Biden, he might even leave the USA.

During a portion of the rally, where Trump was busy berating Biden as the worst presidential candidate in history, he suggested a possible move out of the country should he lose.

President Trump is at it again...

And the comments are just continuing to come on through during this chaotic presidential campaign.

And during his Georgia rally, Trump made one of his biggest suggestions yet.

Saying that he might even consider leaving the United States if he happens to lose to Biden. But that wasn't all.

But it seems that he has some serious competition from his Democratic rival, Joe Biden, although Trump probably wouldn't admit that himself.

6 subjects were set by Wallace to be discussed that evening...

The Trump and Biden records, the Supreme Court, the COVID-19 pandemic, the economy, the issue of race and violence in cities, and the integrity of the election. But despite these firm rules, the pair just seemed to focus on personal insults... and even familial issues.

Well, the first and only vice presidential debate of 2020 went ahead on October 7th between Vice President Mike Pence and Senator Kamala Harris.

Washington Bureau Chief for USA Today, Ellen Page, moderated the heated debate in Utah and in similarity to the first Presidential Debate, sparks flew for miles.

Kamala Harris opened eyes with her firm techniques in handling interruptions by Pence...

Including her putting her hand up and firmly saying, "Mr. Vice President, I'm speaking"... engulfing Pence into silence.

Including the COVID-19 pandemic, Trump administration, racism and inequality, and the Supreme Court; all of which were discussed in a much calmer and well-rounded nature than the President and Biden.

According to the polls, Harris was the one who came out on top...

And it probably didn't help Trump's campaign any more that Pence became a laughing stock after a fly landed on his head half-way through the debate. You really can't make these things up!

Following the VP debate, Trump continued to insist on how he was "feeling better than ever."

The virtual debate that was scheduled to go ahead on the 15th of October was officially canceled due to Trump's refusal.

For some reason, the proposition of a virtual debate infuriated the President and he boldly said he "wouldn't waste his time" on it.

So instead, Joe Biden participated in a Philadelphia town hall forum moderated by ABC's George Stephanopoulos...

And in typical Trump fashion, the President announced at the last minute that he would hold his own town hall forum in Miami at exactly the same time, hosted by NBC.

Trump's event will be hosted by NBC's Savannah Guthrie...

And this is the first time ever that 2 hopeful presidential candidates will go head-to-head at the same time while not being at the same event.

The 2 events created A LOT of headlines.

But a lot of people can't stop talking about Trump's comments a little later on in Georgia.

At his next rally in Macon, Georgia, Trump made some big claims.

Trump was speaking about how Biden is 'the worst presidential candidate in history'. He said that losing to Biden would be massively embarrassing for him.

What he said next was unbelievable.

Speaking at the rally, Trump said:

Can you imagine if I lose, my whole life, what am I going to do? I am going to say I lost to the worst candidate in the history of politics?

Maybe I will have to leave the country, I don’t know.

As he made the comments, his followers cheered and laughed.

During the same night, Trump also made comments about locking Joe Biden up claiming that his family is corrupt...

You really can't make this stuff up.