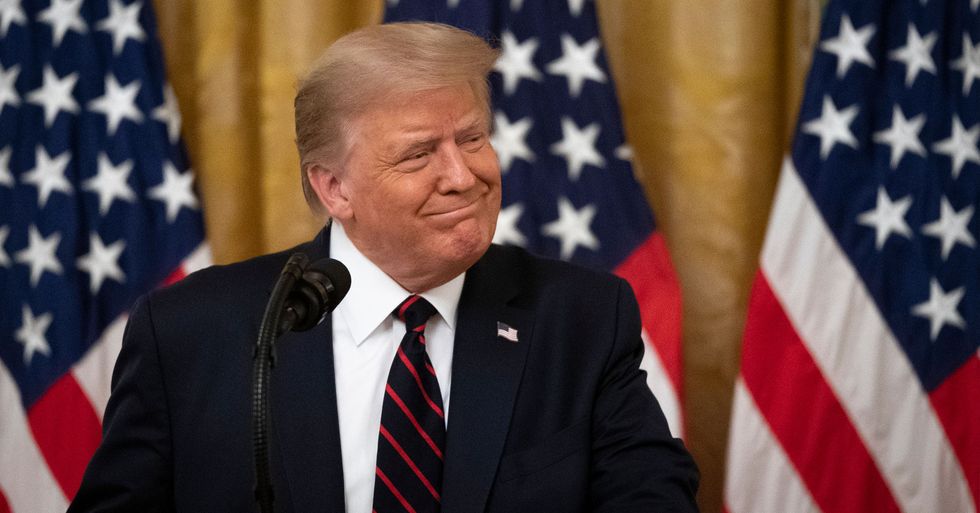 Last night, President Trump made a cryptic claim about pardoning someone "very, very important", and it has got a lot of people talking...

President Trump, the king of cryptic statements, is at it again.

Late last night, Trump made some pretty obscure comments about "pardoning" someone today on August 18th, and speculation has since been rife.

And now that he has revealed who the "very, very important" person is...

Opinions have been seriously divided.

Now, ever since he secured his place in the White House back in 2017...

The President has been no stranger to issuing strange and obscure statements at his press conferences (and on Twitter, of course).

And, much to our shock, it turned out to not be a publicity stunt.

It's certainly been up and down - Trump has sparked his fair share of outrage, imposing a temporary travel ban on Muslims entering and leaving the U.S. and banning transgender people from the military, just for a couple of examples. But he also passed a bill that makes animal cruelty a federal crime, and unemployment in the country is at an all-time low at just 3.6 percent.

President Trump has shown no real support for the historic movement, and he clearly isn't interested in seeing any change for the black community.

But this week, there has been a temporary distraction.

Last night, the president made a mysterious comment at one of his press conferences.

Now, as we all know, Trump is well known for saying things he doesn't mean in the heat of the moment.

Who remembers when he pondered injecting disinfectant to combat coronavirus?

"Doing a pardon tomorrow on someone who is very, very important," Trump casually told reporters on Air Force One.

Speculation as to who the "very, very important" person could be has been rife...

And Trump declined to elaborate further, only adding that it will not be Michael Flynn or Edward Snowden, who have both been publicly charged with leaking secret government information.

On Saturday, Trump had said that he was considering a pardon for Snowden...

Who gave a trove of secret files in 2013 to news organizations that disclosed vast domestic and international surveillance operations carried out by the NSA.

But, evidently, he has had a change of heart.

Because he has now announced that he has issued the long-awaited pardon for Susan B. Anthony, the woman who voted in 1872 before women had the right to vote.

The White House revealed the news on Twitter not too long ago...

America will always honor its heroes! President @realDonaldTrump will sign a full and complete pardon for Susan B.… https://t.co/qxSlWx95oV
— The White House (@The White House)1597764607.0

By sharing a video of Trump's speech alongside the caption: "America will always honor its heroes! President @realDonaldTrump will sign a full and complete pardon for Susan B. Anthony, who voted in 1872 before women had the right to vote."

Many rushed to offer their congratulations...

And applauded the president for his long-awaited move.

However, others weren't too impressed...

@WhiteHouse @realDonaldTrump I see what you are trying to do, but here's the thing: Anthony refused a pardon from W… https://t.co/yPkZlD8Xx2
— Red State Nasty (@Red State Nasty)1597764794.0

And have argued that, by issuing a pardon, he is actually criminalizing the whole suffragette movement.

But whatever you will say about him...

It's fantastic that the president is finally addressing the suffragette movement.