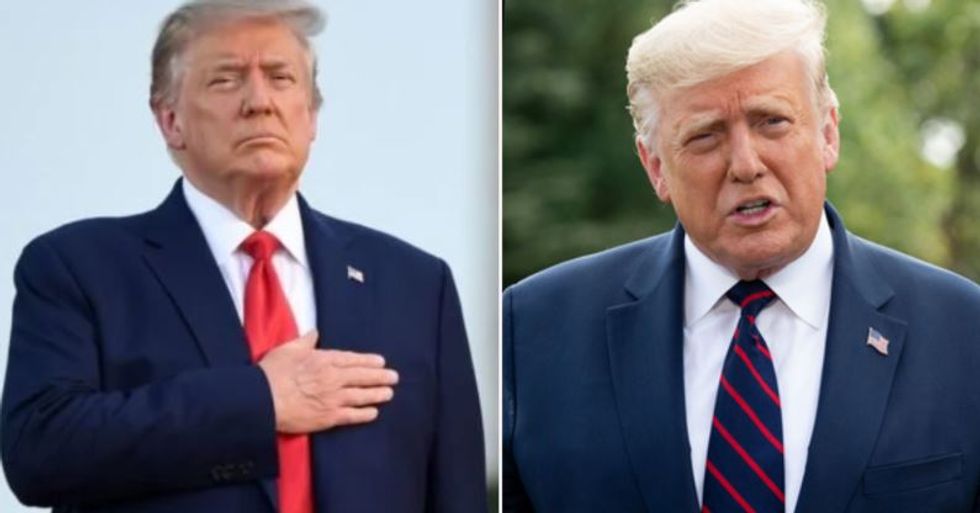 Just over a week after testing positive for COVID-19, Donald Trump has now claimed that he is immune to coronavirus and that he has a protective glow...

He made the 'interesting' comments during an interview with Fox News this morning.

Keep scrolling to find out exactly what his words were.

Donald Trump has given us yet another update on his health...

But this one might be more dramatic than it needs to be.

And the facts? We got none of those.

Only a bunch of 'interesting' claims he made to Fox News earlier today.

Now, the world was left shocked when Donald Trump and his first lady, Melania, tested positive for COVID-19...

And the surprising news came just over a week ago on the 2nd of October.

Will the president ever take this pandemic seriously?

But the main thing that has been concerning his followers is his age bracket.

Mark Meadows, the White House Chief of Staff, spoke at a live press conference where he stated that he is "optimistic the President will have a very quick and speedy recovery."

He was transported to Walter Reed National Military Medical Centre.

And last weekend, Trump gave a video update from the hospital, in which he praised the "incredible" Walter Reed National Military Medical Center, and revealed that he had "met some of the soldiers" and was planning a "surprise" visit.

It's vital for the president to stop downplaying the virus...

But things got worse as he recently made a shocking announcement about his health.

During a phone call with Fox Business on Thursday morning, the President revealed some details about his health, including the fact that he's a "perfect physical specimen..." and is now "immune" to COVID-19.

And it left us all speechless, that's for sure...

When he was asked if other people would get treatments he got while recovering, he said this:

“Yeah they’re going to get it," he said, then adding: “I’m back because I am perfect physical specimen and I'm extremely young, and so I am lucky in that way." If he's young, then I must still be a baby.

“I don’t have any of the problems you hear about... Perhaps a couple of pounds here and there."

But that doesn't match his past health reports which placed him in the obese category.

His claim he also has no heart problems or diabetes contrasts the annual physical report released by White House physician Dr. Sean Conley back in June, just under four months ago which added him into the high-risk category. Yikes.

He made another false claim during the phone call in which he stated that when you contract the virus, you "just get better."

Not true, Mr. President. Over 200,000 Americans have died after catching COVID-19. He also added: “When you catch it, you get better, and then you're immune."

Scientists have not yet confirmed if this is the case, though they are hoping that it's true. But speaking earlier today to Fox News again, Trump again reiterated his comment about immunity.

Trump again claimed when you get over COVID you're immune.

Trump also claimed that he now has a 'protective glow', whatever that means. More specifically he said:

I have to tell you, I feel fantastically. I really feel good. And I even feel good by the fact that, you know, the word immunity means something — having really a protective glow means something. I think it's very important to have that, to have that is a very important thing. The doctors, the White House doctors, as you know, are the best, and they said [I’m] totally free of spreading. There’s no spread.

"I beat this crazy horrible China virus", he added.

Although there is no evidence to suggest that recovering from COVID actually makes you immune.