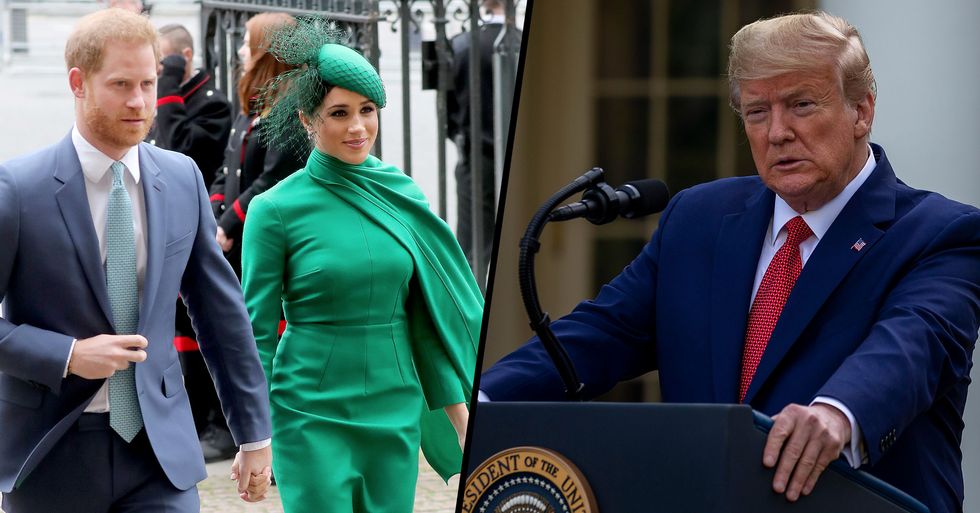 However, things only get worse for the couple as they recently decided to give us all some advice on how to combat the coronavirus. Many have deemed their words as "ridiculous" and "annoying." But now that Donald Trump has weighed in on the couple's issues, it seems as if the whole world really is against them...

Keep scrolling for his unnecessarily savage tweet, and to see their response to his comments.

Things have not been going well for the Duke and Duchess of Sussex lately.

It all started with the denouncing of their involvement with the royal family and everything else, including their list of new enemies, followed suit.

But we have to admit, Meghan and Harry are still one of the most famous couples in the world.

But things haven't been as rosy and smooth-sailing as they have been appearing. And it gets worse since the coronavirus outbreak started taking over the world...

But, the couple have seemingly had enough of the harassment and the criticism...

Amid accusations that the couple didn't tell other senior royals of their plans to step back, the source told PEOPLE that the Sussexes felt they had "no choice" but to handle things the way they have. However, their feelings are much stronger than we initially thought.

Is how hard this whole experience must have been for Meghan - as she was a new mother at the time of the media firestorm.

How exactly is the couple planning on being financially independent? Donald Trump decided he had an answer for the former royals... Read on to see his savage tweet.

They do have other options though...

Of course, we already know they'll be getting money from Prince Charles, but there were also rumors swirling that the pair were in talks with a Hollywood elite team. However, this won't be happening any time soon because of the current state of the world.

According to the Daily Mail, the couple have been told to remove the word "royal" from their branding on both their social media and website.

This could cause huge issues for their trademarked name.

The move comes after the Queen allegedly felt it was "inappropriate" for Meghan and Harry to use the word "royal" in their branding given the fact they have chosen to go their own way. But the couples' initial hard feelings might have been stronger than we thought.

Omid Scobie, Bazaar.com’s royal editor and a journalist in Harry and Meghan’s inner circle said this:

“Things might have been different if a family member or two had stood up for them during the darkest times."

But apparently, no one did.

He referred to them as "a couple very much hurting", who were forced to say goodbye to their team. He also mentioned Prince Harry’s heartbreak at giving up his military honors, describing it as “a wound that will take time to heal."

And since the coronavirus outbreak, it's just been one hit after another...

The news comes after the Board of the Invictus Games The Hague 2020.

"We are now investigating all options to reschedule the Invictus Games, subject to the availability of key facilities and resources, to May or June 2021. Significant planning to scope and confirm this option is underway."

Things get worse for the couple as they recently tried to address the pandemic.

Still using their official royal Instagram, they posted this "advice" already given to us by the World Health Organization, writing in the caption: "Around the world, the response from people in every walk of life, to protect and look out for their communities has been inspiring."

"None more so than the brave and dedicated healthcare workers on the frontline, risking their own well-being to care for the sick and fight COVID-19. Wherever you are in the world, we are all incredibly grateful."

But it was this part that really had everyone frustrated:

"For all of us, the best way we can support health workers is to make sure we do not make their job any harder by spreading this disease further. No matter where you are, the @WHO have shared some guidelines that can help. You may have seen or heard these before, but they are as important today as ever."

Many Instagram users took to the comments to troll the couple.

One user insinuated that Meghan herself had written this "ridiculous" post.

While a Canadian user got passionate.

Are they blaming Meghan and Harry for infecting the people of the country? That's too harsh.

And it seems as Donald Trump had his own advice to give to the royals.

Well, it looks like more of a threat than anything. While also dealing with the rising number of cases in the United States, it seems as though the President found a minute to tweet about Harry and Meghan.

That's all good and well but they didn't ask or recommend that we pay for them... So where has this come from?

"There are people dying, Donald."

This user replied to the President with what we're all thinking.

And this user had a harsh clap back for him...

@realDonaldTrump Once a jerk always a jerk. Glad to see you've got a lot of extra time on your hands for dealing wi… https://t.co/azHKHX3cyV
— Joe Lockhart (@Joe Lockhart)1585508679.0

He claims the President is being "distracted."

And now, Harry and Meghan have responded to Trump's savage comment...

A spokesperson for the couple said: "The Duke and Duchess of Sussex have no plans to ask the U.S. government for security resources. "Privately funded security arrangements have been made."

The important thing in all of this is that Trump remains focussed.

Listen to the government and stay at home so we can fight this pandemic. Stay safe, folks.