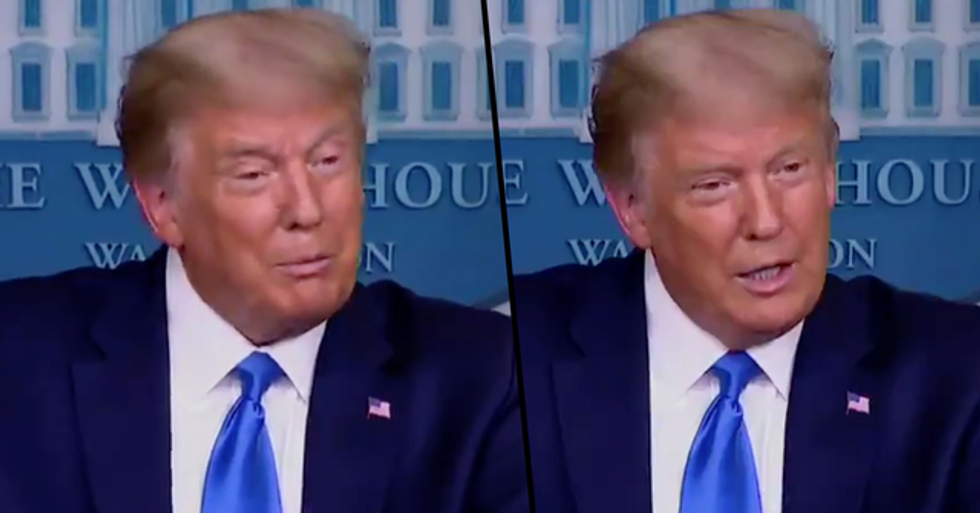 Donald Trump has this week revealed his true thoughts on Meghan Markle...

And, as you may have guessed, they weren't too favorable.

Following Meghan and Harry's 2020 election plea, the president had some strong words for the royal couple.

Trump was less than impressed with Meghan recently, it appears...

And he didn't hold back in expressing his distaste.

Now, the president's comments won't come as much of a surprise to most of us...

Because ever since her introduction into the royal family, Meghan Markle has experienced near-constant criticism, scrutiny, and abuse.

When Meghan started dating Prince Harry, her career as an actress seemed to be instantly swapped for a life fulfilling royal duties.

And, after a year of dating, they announced their engagement.

The couple married in a lavish Windsor wedding in May, 2018...

However, though the family seemed to radiate with happiness...

So, it didn't come as a big surprise when she and Harry made the bold decision to step down from royal duties.

Earlier this year, the couple released a joint statement that explained how they wanted "a normal upbringing for their child" and how they feel that spending their time between the U.K. and America would be much more appropriate for their family environment.

It's no coincidence that Meghan is the first-ever person of color to join the Royal Family...

But now, someone from this side of the pond has decided to publicly slam Meghan...

Though, of course, none of us are too surprised.

At a press conference on Wednesday, the president responded to Meghan and Harry's recent 2020 video with TIME magazine.

This week, the couple sat down with Time to issue a plea to all American's to get out and vote this November...

But many took their video as more of a Joe Biden advert, especially when they told American voters to “reject hate speech, misinformation, and online negativity."

Meghan also said the 2020 presidential election is the “most important election of our lifetime"...

Seeming to imply that a leadership change is needed.

Many heard their speech as a blatant attack against President Trump...

Prince Harry has effectively endorsed @JoeBiden what is the US election to do with him? he doesn't have a vote and… https://t.co/GTeehMzhDo
— Andrew Pierce (@Andrew Pierce)1600859792.0

Which is controversial enough without weighing in on the fact members of the royal family aren't allowed to discuss or address politics... Never mind encouraging members of the public to vote for a particular candidate.

So, of course, Trump was not happy...

And, when a reporter asked him to comment on Meghan's support for Biden, he didn't hold back.

"And she probably has heard that but—I wish a lot of luck to Harry, cos he’s gonna need it."

You can watch his comments here.

What do you think about this response?

And here's the video that kicked it all off...