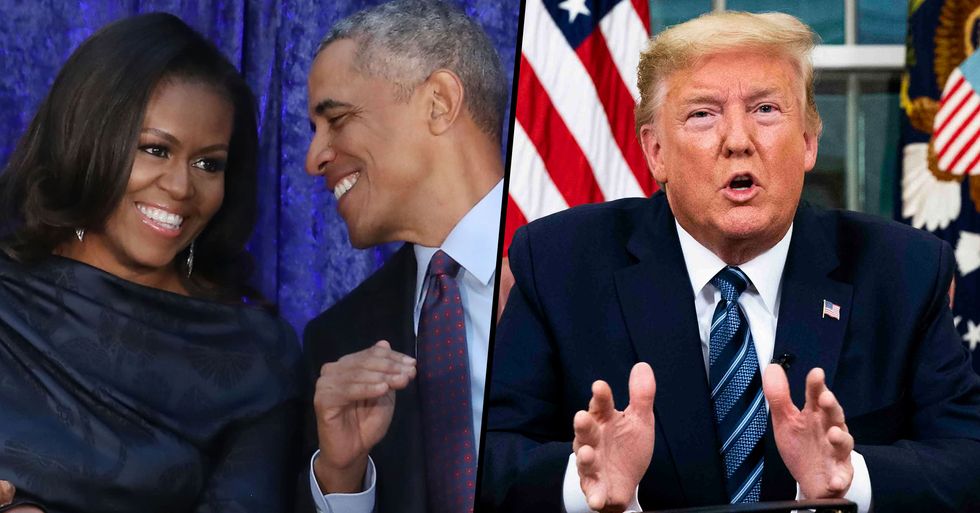 It hasn't taken Donald Trump long to hit back at Michelle Obama in response to her sour speech made about him recently...

Michelle Obama isn't afraid to be honest and on the line...

And that includes talking about politics.

And she had one man in her sights.

In the first night of the Democratic National Convention, Michelle made a stirring speech.

Tackling the myriad of issues with Donald Trump's Presidency, and even taking a swipe at Kanye.

But her absolute burns towards Trump may just have been the highlight of the speech.

And, true to that, in last night's episode, the star got candid about mental health.

And now Michelle has followed up with some even firmer words.

Tearing Trump's Presidency apart, piece by piece. And the internet is loving it...

I just listened to @MichelleObama talk at the #DemConvention she is such an inspiring women and i hope that many Am… https://t.co/dnkEONaTNy
— Claudia Cacciola (@Claudia Cacciola)1597741324.0

Even though I missed most of the #DemocraticConvention2020 last night( work overnights), watching @MichelleObama’s… https://t.co/pHv9TOYs4S
— Angela Coleman (@Angela Coleman)1597735046.0

What a dig! The best orator of all time. #MichelleObama broke the internet, Meanwhile Trump : https://t.co/BtP2rWwXOr
— Amisha Gupta (@Amisha Gupta)1597730580.0

Can’t stop thinking about how if I was Trump I’d be so embarrassed to know Michelle Obama saw me do that terrible i… https://t.co/0yAq4mhXyy
— Akilah Hughes (@Akilah Hughes)1597734177.0

Well, it only took a few hours, but the president has spoken out about what Michelle said about him and his skills as a world leader...

And it's clear that he isn't impressed.

In classic Donald Trump fashion, he firstly tweeted this...

"Somebody please explain to @MichelleObama that Donald J. Trump would not be here, in the beautiful White House, if it weren’t for the job done by your husband, Barack Obama. Biden was merely an afterthought, a good reason for that very late & unenthusiastic endorsement.....".

"My Administration and I built the greatest economy in history, of any country, turned it off, saved millions of lives, and now am building an even greater economy than it was before. Jobs are flowing, NASDAQ is already at a record high, the rest to follow. Sit back & watch!"

If you say so, Mr. President!

We aren't really surprised that the president decided to hit back at Michelle on Twitter, we must say.

Truly incredible stuff! Want more from the Obamas? Scroll on for a look around their incredible vineyard and estate ...