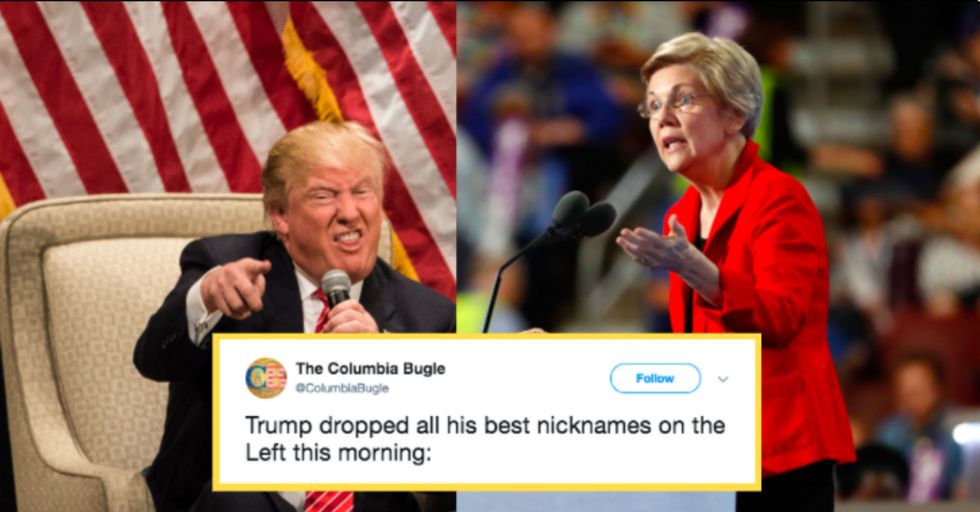 If you're thinking that the 11-minute ban acted as some sort of hard reset for the president, you'd be wrong. This morning, Trump got right back on the Twitter train and things were business as usual. And by "usual," we mean "full of vitriolic hate, deflection, and yes, even racism."

One of Trump's first tweets this morning was about "Crooked Hillary" and "Pocahontas."

"Crooked Hillary," of course, is a reference to Hillary Clinton — the woman who ran again Trump for president and won the popular vote. "Pocahontas" was a racial slur directed at Senator Elizabeth Warren.

This isn't the first time Trump has called Warren "Pocahontas."

(Which isn't surprising. The man tends to re-use his favorite insults ad nauseam.) He also used the slur repeatedly throughout the 2016 presidential campaign. At one point, he almost, kind of, but not really at all apologized for calling Warren "Pocahontas," saying, "I do regret calling her Pocahontas because I think it’s a tremendous insult to Pocahontas. So to Pocahontas, I would like to apologize to you."

The slur is meant as a dig at Warren's claims that she has Cherokee and Delaware Indian heritage.

Warren has not been able to produce documentation to verify these claims. In her 2014 memoir, she wrote, "I never questioned my family’s stories or asked my parents for proof or documentation. What kid would? … I was stunned by the attacks. How do you prove who you are? My brothers and I knew who we were. We knew our family stories." Regardless of whether Warren is actually part Native American or not, Trump calling her "Pocahontas" is absolutely a racial slur. Native American groups have repeatedly condemned his use of the nickname. Last year, one member of the Cherokee Nation named Mary Nagle told MSNBC that "Trump’s inability to discern the difference between Senator Warren and Pocahontas is no accident. Instead, his attack on her native identity reflects a dominant American culture that has made every effort to diminish native women to nothing other than a fantastical, oversexualized, Disney character."

Of course, Warren wasn't about to let Trump get away with his childish behavior.

You might think your tweets are cute, @realDonaldTrump, but they won’t stop Mueller's investigation or keep your people out of jail.
— Elizabeth Warren (@Elizabeth Warren)1509717053.0

She tweeted back at the president saying that it was obvious he was just trying to deflect attention away from the ongoing investigation into whether his campaign colluded with Russia during the election.

Look, Donald Trump. None of us are fooled by this attempt at deflection.

I understand your desperation to change the subject, @realDonaldTrump. Your campaign mgr was just indicted for cons… https://t.co/gHy3u0FGTa
— Elizabeth Warren (@Elizabeth Warren)1509716953.0

Feel free to rant and rave away on Twitter — although, you should definitely stop with the racial slurs. You're not going to distract us from what's really going on, though.