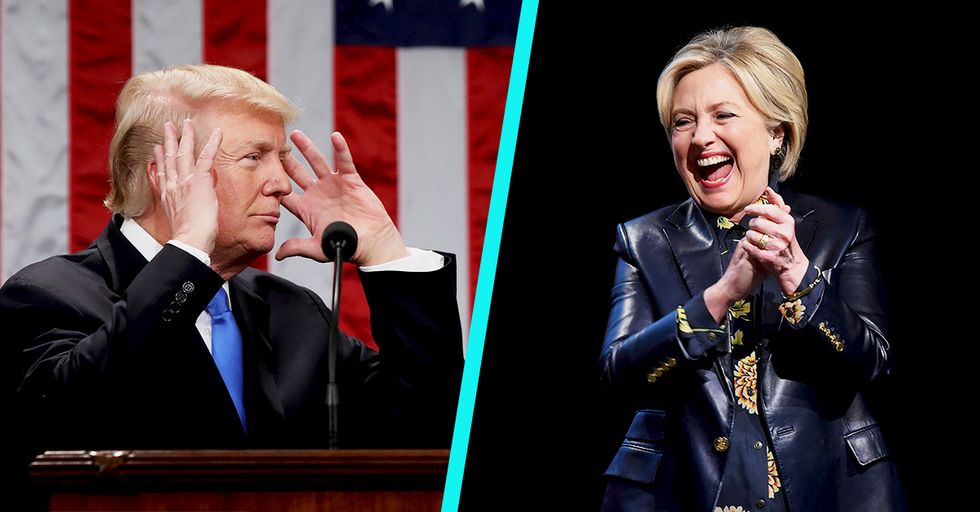 Well, it happened. Donald Trump gave his first official State of the Union address on January 30, 2018. For the most part, it went off without a hitch. Although traditionally, it takes a few days after one of Trump's teleprompter speeches for him to go truly off the rails, so we're not out of the woods yet!

Still, some people couldn't help but wonder what it might have been like to hear this State of the Union if Hillary Clinton were the one delivering it. In fact, maybe Trump was wondering that as well. How else could you explain the fact that he "borrowed" one of Clinton's lines?

This was Trump's first State of the Union.

He did address a joint session of Congress back in February of last year, however. But this was the first speech that officially fell under the State of the Union category.

At one point in his speech, Trump said this:

President Trump: “This, in fact, is our new American moment. There has never been a better time to start living the… https://t.co/EzdlIUAAsP
— The Situation Room (@The Situation Room)1517366182.0

"This, in fact, is our new American moment. There has never been a better time to start living the American dream." It's a nice sentiment, sure. But don't go giving a standing ovation just yet (by the way — holy cow, were there ever a lot of standing ovations during this speech! It was exhausting just to watch). You see, that phrase, "new American moment"? Yeah. This isn't the first time we've heard that from a politician.

In fact, we heard it from "Crooked Hillary" herself!

Clinton used the phrase back in 2010 to tout the Obama administration's foreign policy. Clinton's "new American moment" was "a moment when our global leadership is essential, even if we must often lead in new ways." Trump, on the other hand, used the phrase to refer to the domestic successes he believes he's had.

Now, most likely, Hillary Clinton wasn't the first person ever to put the words "new," "American," and "moment" in that order. But...seriously?

I'm not saying Donald Trump ripped the phrase directly from Hillary Clinton, just like he lifted "Make America Great Again" from Ronald Reagan's 1980 presidential campaign. After all, the likelihood that Trump actually wrote his speech is, well, zero. But still. Maybe just do a quick Google search first?

Obviously, this isn't the first time the Trump family appears to have borrowed generously from someone else...

But, hey. Maybe it'll be the last? We can hope! (By the way, Donald, "hope" was kind of Barack Obama's thing, just FYI.)

And while we're all reminiscing about how the 2016 election could have gone...

I bet we can guess who you voted for in the last election! Just click here to take a "Would You Rather?" quiz and put us to the test!