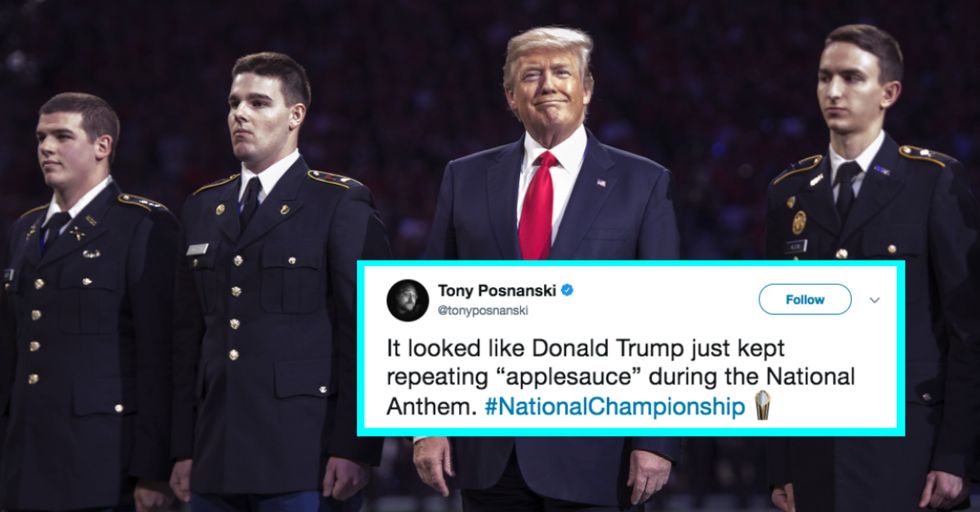 This is rich, folks. Not surprising, not shocking, but disturbing and unacceptable in so many ways. Donald Trump attended the NCAA College Football Championship game on Monday night and proved (yet again) that he really is as terrible as he seems.

Not that we needed any more examples of his unfitness for office, but he offered it up on a silver platter before the game when he attempted and failed to mouth the words to our national anthem.

Yes, the man behind #MAGA, the No. 1 detractor of Colin Kaepernick and the #TakeAKnee movement, can't even sing "The Star-Spangled Banner" correctly.

Here's Trump at the game on Monday night looking like a smug baby who's proud that he just pooped his diaper.

Flanked by ROTC members, the president, our president, Donald J. Trump took to the field before the Alabama-Georgia championship football game.

He was in his supposed "heartland," and yet he was met with a healthy mix of cheers and boos.

But still, he stood proudly. Trump put his tiny hand up to his non-existent heart and sang along to the national anthem in the presence of 70,000 football fans at the stadium and millions watching at home.

And he totally messed it up!

The guy started out so sure of himself, mouthing along to every word, and then he completely lost it. It was awful to watch, like a car crash or that Kirk Cameron movie where he tries to save Christmas.

Take a closer look — this is real, people. The President of the United States doesn't know the words to the national anthem.

There are a couple explanations for this: Either Donald Trump never knew the words to "The Star-Spangled Banner," which would be appalling, as he is the president and he's also made an incredible stink over the past year about people "disrespecting" the song and the flag. Or Donald Trump once knew the words to the national anthem but his mental capabilities have diminished so greatly that he cannot remember them. Both options are equally as disturbing.

Understandably, many (myself included) are absolutely fuming that the guy who dared to criticize Colin Kaepernick and the utterly respectful, significant, and poignant #TakeAKnee movement doesn't know the words to the song he apparently sees as the only indicator of love for our country.

If that's the case, it's clear that Donald Trump doesn't love or respect or cherish our country at all. But we knew that already, didn't we? Many on the Internet had theories as to what the president could have actually been mumbling since he very clearly was not mumbling the words to the national anthem...

Ah yes, perhaps Trump resorted to the words background actors often use to make it look like they're speaking and provide convincing mumbling in crowd scenes in movies. That would make sense considering Donald Trump sees his life as one big reality TV competition show.

This writer offered up the possible lyrics Trump was singing instead:

A "Manthem" would make sense, as Trump is obsessed with appearing strong and masculine, but if I'm being honest, this is way too clever for the president to come up with.

While it isn't shocking that Trump can't properly sing the national anthem, it's still frustrating beyond belief.

Just fell out of my chair and kept rolling for several yards upon being presented with evidence that Trump may not… https://t.co/KoUaeO1c51
— Patrick Monahan (@Patrick Monahan)1515461257.0

He can't even put in the effort to defend the extreme views he spouts, no matter how bogus they are. Fine, yeah, we understand that Trump has no real convictions and his only purpose in life is to elevate himself at the expense of others, but he couldn't have even tried to stick to his crazy opinion? He's a monster of the worst kind.

There are so many people who deserve to be mad about this, and you know what? They are.

What might seem to you like a minor infraction on the part of the president, or even perhaps a misreading of a guy who just got lazy and started blubbering instead of forming whole words with his mouth, is a hypocritical moment of epic proportions to anyone who has fought for this country, from veterans to Colin Kaepernick and beyond.

Trump may have claimed to be a "stable genius," but this wasn't even the action of a man in his right mind.

Here's a truth that Donald Trump would absolutely detest to know has been stated: Colin Kaepernick is more respectful of the flag, the country, and the national anthem than Donald Trump will ever be. Go mumble in a hole somewhere, dude.