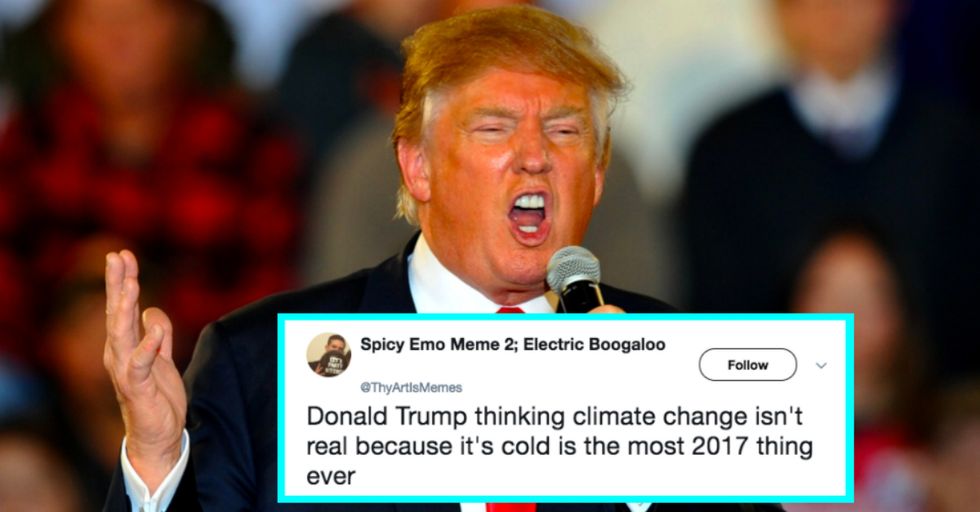 For the last year, at least, Donald Trump has solidified his position as America's least favorite racist, ignorant uncle. But his latest tweet about climate change seals the deal like nothing else before it.

On Thursday afternoon, Donald Trump decided to comment on the cold temperatures that are currently hitting much of the United States. Cities on the East Coast and in the Midwest are experiencing single-digit or even negative-degree temperatures. They're being pounded with snow. It's all in all...not normal.

Trump used the freezing temperatures in an attempt to discredit global warming – or more accurately, global climate change — like a child. That's right, folks. He pulled out the old "If global warming exists, why is it so cold?" nonsense. Obviously, the Internet piled on immediately. They weren't going to let this buffoon, our president, get away with such ignorance.

On December 27, the weather department of the Washington Post tweeted out a very pertinent warning:

They know people. They know that people will try to use this "pocket of cold" in the U.S. to try to debunk global warming, even though that's utter nonsense.

And just over 24 hours later, there it was, folks, from the President of the United States:

Oh-ho-ho, this is so bad. Like, if anything were unbelievable anymore, this climate-change-denying tweet from Donald Trump would be unbelievable. "Bundle up!" his smug a** wrote while categorically getting everything wrong about climate change.

The rest of the Internet immediately destroyed him, with logic and science and common sense.

Weather is not climate. Period. I don't know who is responsible for calling it "global warming" instead of "climate change" right off the bat, but they deserve a smacking for facilitating dumb arguments like Trump's.

California Congressman Adam Schiff pointed out that this year has been a banner year for evidence that climate change exists:

We've had massive, deadly hurricanes and intense, sweeping wildfires this year, weather events that have destroyed livelihoods and killed people, and here's Donald Trump, joking about the cold. Beyond insensitive. Beyond inappropriate.

Not to mention, the fact that it could be the "COLDEST New Year's Eve on record" only proves that climate change is real.

Global warming doesn't mean that everywhere is warmer than it should be all the time, and Donald Trump would know that if he passed fourth-grade science. One fellow reality TV star jumped in to school Trump on his idiotic views...

Turns out he's way more well-versed in the nuances of the issue of climate change than the President of the United States. Cool, cool cool cool (which, for the record, still means global warming is happening).

A lot of people were making jokes about Donald Trump's tweet, but they were forgetting one thing...

Oh yeah. This would be hilarious if Donald Trump didn't have the power to facilitate the continued destruction of our planet and actively plan to do so.

But not everyone was simply lamenting Trump's stupidity. Some tried to offer practical solutions:

And you know what, this isn't such a bad idea. Trump has tried to destroy everything else Obama put in place. Maybe if he thought Obama created climate change, he'd try to stop that too.

Others were more concerned about the other things Trump doesn't comprehend now that it's clear he really doesn't understand climate change.

Tax bill? Way off the table. Healthcare? Psh. He only listens to Fox News and his own brain, which are two very unreliable sources.

One thing is for sure:

Donald Trump has said a lot of crazy things this year, and this is just the cherry on top of that steaming pile. Let's all hope and pray for some sanity next year, or at least less insanity.