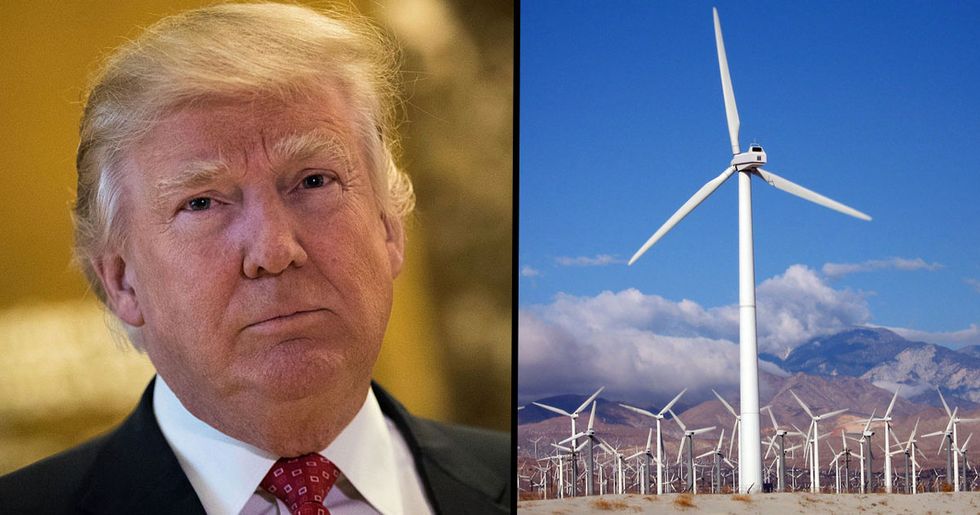 Safe to say, Donald Trump is not a popular man. At least, he’s not when it comes to people with morals and… oh yeah, brain cells.

Since becoming President of the United States, Trump has caused an abundance of controversy and stirred up a lot of hate. In the short time since his inauguration into office, the well-known businessman has made it illegal for transgender people to join the army, has tried to ban Muslims from entering America and is still trying desperately to fund his wall for the borders of Mexico.

But it seems that Trump not only hates minorities and poor people, he also hates the environment, something that he remains vocal about on social media to this very day. But why is he so against wind turbines? What vendetta does he have? Well, the answers to those questions may surprise you!

Even back in 2012, we can find evidence of his hatred for the energy-creating inventions.

This evidence, of course, comes in the form of an iconic Trump tweet.

Probably not many, Donald. Hey! How many oceans have been polluted by oil?

He even criticized Obama and his push for environmentally friendly inventions.

In 2012, Trump brought attention to Obama’s push for wind-created energy, stating that, "If Obama keeps pushing wind turbines, our country will go down the tubes economically, environmentally & aesthetically."

Because that’s the big worry, isn't it, Trump?

When the world is nothing but a dying, barren husk, aesthetic will be the last thing we'll be worrying about.

Trump has even fought against the construction of a wind farm in Aberdeenshire.

Upon discovering that the Scottish Minister was planning on building a wind farm in Aberdeenshire in 2013, Trump immediately took issue with the whole thing.

Well, because it was near his golfing mansion of course. No, seriously!

He even brought up a national tragedy to prove his point.

When speaking about the wind farm proposal, Trump said, "wind farms are a disaster for Scotland, like Pan Am 103." Not cool.

In case you’re wondering what Pan Am 103 is…

It was a tragic event wherein a plane was shot down by terrorists in 1988. The transatlantic flight fell to the ground, killing all two-hundred and fifty-nine passengers on board. The disaster also took the lives of eleven people on the ground as it crashed, in Lockerbie, Scotland.

And Trump compared that to a wind farm?

But, apparently, Trump just wants to protect the animals.

Not only would the turbines upset his rural mansion, but they'd also kill birds, which we all know Trump is a fan of! He’s got such a good heart. What a guy.

This was something that he mentioned last summer.

While addressing a crowd in West Virginia, Trump decided to bring up his avian anxieties, stating that, "You look underneath some of those windmills, it’s like a killing field [for] birds."

But he has other worries.

He also seems to believe that wind won’t be enough to power his television.

Yes, the President of the United States said this!

At a rally in Michigan last week, Trump stated that if Hillary Clinton had become president, then America would have had to get used to wind-created power.

Oh no! What a dystopian nightmare that would have been!

Trump elaborated on the point, stating that, "If it doesn’t blow, you can forget about television for that night. ‘Darling, I want to watch television.’ ‘I’m sorry! The wind isn’t blowing.’ I know a lot about wind."

We bet he does, all he does is fart around.

But it seems that Trump is no longer going to take it lying down.

Instead, he has set out to further tarnish the good wind turbine name.

At a Republican fundraiser in Washington, Trump had something very interesting to say about wind turbines.

And, you're not going to believe it.

At the event, Trump stated the following: "They say the noise causes cancer. If you have a windmill anywhere near your house, congratulations—your house just went down 75 percent in value."

Yep, he said that.

We're not sure if Trump actually believes this statement, but if he does, then America may be in more trouble than we thought.

Although, of course, Trump is no doctor.

Hell, I’m not a doctor, but even I have a better grasp at how cancer is formed than our American President, by the sound of it.

But why does Trump hate turbines so much?

Is there a reason? Or is it just his venomous orange brain lashing out again?

Well…there could be a reason.

And that reason is, Trump has never invested in wind as a viable energy source.

But he has invested in other sources of energy.

Not only does Trump want to build a landscape destroying wall, he also a supporter of both coal and oil.

Coal, which actually does cause major health issues.

As Johnathan Chait wrote: "A power source that does cause many health problems, including cancer, is coal, an extremely dirty fuel Trump loves and has attempted to bolster, with almost no success. Aside from costing more to produce than other sources of power, and in addition to enormous air-pollution side effects, coal also emits greenhouse gases in large amounts."

So not only does it make you sick…

We guess wind turbines are just too clean and efficient?

Who wants cool, crisp, clean air when it can be filled with smoke and ash?

But this isn’t the first time Trump has put his medical hat on.

Oh no, the president (and spiritual doctor) once claimed that wind farms also cause stress, insomnia and emotional issues.

Because… well, we don’t know.

We've given up trying to make sense of the way his mind works!

In 2012, Trump claimed that lightbulbs can cause cancer, criticizing, "the idiots who came up with this stuff [who] don’t care."

Yeah, he actually thinks that this is less harmful than wind turbines.

Let’s see where his vengeful eye falls next.

We're sure that Trump will attack wind farms again in the near future and, honestly, we're looking forward to hearing what he'll accuse them of next!