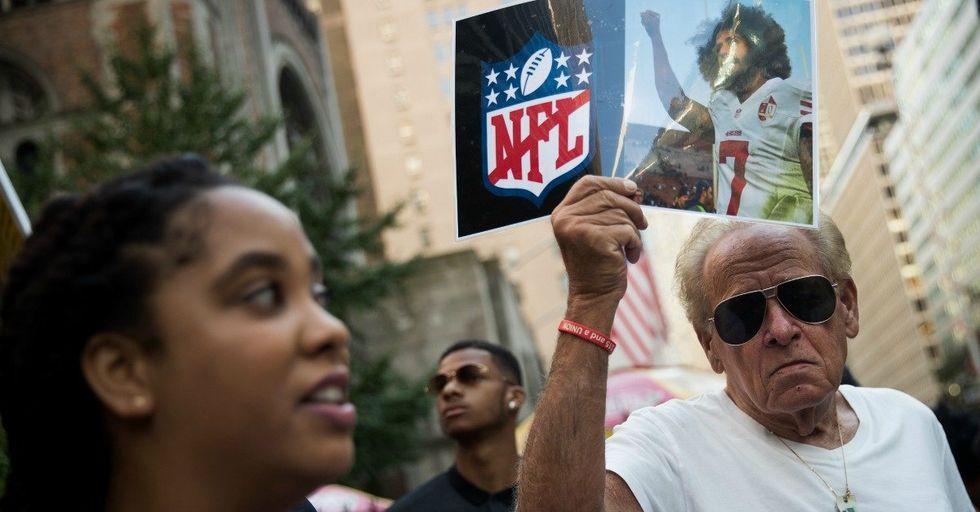 Namina Forna
NEW YORK, NY - AUGUST 23: Activists rally in support of NFL quarterback Colin Kaepernick outside the offices of the National Football League on Park Avenue, August 23, 2017. During the NFL season last year, Kaepernick caused controversy by kneeling during the National Anthem at games to protest racial oppression and police brutality. Kaepernick is currently a free agent and some critics and analysts claim NFL teams don't want to sign him due to his public display of his political beliefs. (Photo by Drew Angerer/Getty Images)

Over the last few months, Donald Trump has made a lot of incendiary remarks, isolating allies, insulting colleagues, and putting us in the direct path of nuclear war. His vicious war of tweets against North Korean leader Kim Jung Un prompted Kim to unearth an SAT word – dotard – meaning 'an old person, especially one that has become weak or senile.'

One of his recent statements, however, has ignited a movement across the NFL that may have changed football forever.

Keep reading to see why players and fans alike are boycotting football this Sunday.

It all started with Colin Kaepernick.

Kaepernick was punished for it.

People booed loudly whenever he took a knee. Fans would come to the stadiums with signs saying 'You're an American. Start acting like one.' In the weeks and months that followed, Kaepernick lost his job, was excoriated by right wing press outlets, and chastised by the president.

Kaepernick was not alone in his silent protest. Other players joined in. Teammate Eric Reid joined. So did Jeremy Lane of the Seattle Seahawks. Megan Rapinoe of the Seattle Reign in the women's soccer league joined as well, stating that as a gay woman, she knew 'what it means to look at the flag and not have it protect all of your liberties' More football players joined the protest, as well as other players from other sports... and high schoolers... and teachers... But to many, it seemed un-American.

Last Friday, Trump gave a speech in Virginia to support Luther Strange's Senate bid. But in his usual unscripted style, Trump declared, 'Wouldn’t you love to see one of these NFL owners, when somebody disrespects our flag, to say, ‘Get that son of a bitch off the field right now. Out! He’s fired. He’s fired!’ The players, to put it lightly, weren't pleased.

And neither were their mothers.

On Friday evening, journalist, Jamil Smith, tweeted an ESPN article chronicling Trump's remarks. Colin Kaepernick's mother, Teresa, replied to the tweet with what will soon become an immortal clapback for all mothers everywhere, 'Guess that makes me a proud bitch.'

Insult people all you want, but don't insult their moms. Boundaries, people.

Donald Trump had stepped in it, and the sports world was just getting warmed up. Two-time Golden State Warriors MVP Steph Curry told reporters on Friday that he did not want to go the White House to celebrate his latest title win, saying "I don't want to go ... my beliefs stay the same. We don’t stand for basically what our President has – the things that he’s said and the things that he hasn’t said in the right times, that we won’t stand for it." It's been a time-honored tradition for title winners to visit the President at the White House and Curry will break precedent to not attend.

In response, Trump uninvited Curry... from an event Curry already turned down.

And yes, it was as absurd as it sounds. Soon after, the Warriors team released a statement saying, 'In lieu of a visit to the White House, we have decided that we’ll constructively use our trip to the nation’s capital in February to celebrate equality, diversity and inclusion — the values that we embrace as an organization.' Even LeBron James jumped in with a tweet expressing his solidarity for Steph Curry. The fire had been lit.

Since the very beginning of Kaepernick's protests, King had been tweeting about Trump's attitudes towards people of color, discussing the fact that Trump saved his most virulent tweets for people of color while dismissing white supremacists as 'fine people.'

By the morning of Saturday, September 23rd, at least 15 players had joined #TakeAKnee.

NFL Commissioner, Roger Goodall released a statement on Saturday saying, 'The NFL and our players are at our best when we help create a sense of unity in our country and our culture. There is no better example than the amazing response from our clubs and players to the terrible natural disasters we've experienced over the last month. Divisive comments like these demonstrate an unfortunate lack of respect for the NFL, our great game and all of our players, and a failure to understand the overwhelming force for good our clubs and players represent in our communities' Other team owners and managers soon released statements as well.

While most NFL players showed their support during Sunday's games by locking arms during the anthem, many actually kneeled in solidarity during "The Star-Spangled Banner," most notably, Terrell Suggs of the Ravens and Mike Evans of the Tampa Bay Buccaneers. The Seattle Seahawks and Tennessee Titans didn't even come onto the field for the anthem. They remained in their locker rooms during the anthem, before the game. During the same game, Meghan Linsey, from TV show, The Voice," sang the national anthem. On the last note of the anthem, Linsey and her guitarist took a knee in solidarity. Jaguars owner Shahid Khan joined hands with his players before the game's kickoff. During the Denver Broncos vs. Buffalo Bills, Von Miller along with many other Broncos players knelt on the sidelines, while teammates Garett Bolles and Virgil Green stood with their fists in the air. But that wasn't the end of it...

The President had messed with the heart of the nation.

Tom Brady (along with many of the other Patriots) decided to lock arms, but more than a dozen of his teammates, including running back James White, wide receiver Brandin Cooks and cornerback Stephon Gilmore all kneeled. Notably, even Trump's own friend, Patriots CEO and Chairman Robert Kraft, who donated a million dollars to Trump's campaign, issued a statement saying, "I am deeply disappointed by the tone of the comments made by the President on Friday." Kraft later stated, "There is no greater unifier in this country than sports and, unfortunately, nothing more divisive than politics. I think our political leaders could learn a lot from the lessons of teamwork and the importance of working together toward a common goal."

By Sunday morning at 6am PST, Shaun King tweeted "Over 500 players have communicated to me that they intend on demonstrating today."

Twitter user @joshbegley responded "That's one third of the entire league." For a full list of those who kneeled, linked arms, and silently protested today, click here.

Several Miami Dolphins players are even wearing black shirts with #ImWithKap emblazoned proudly on the chest.

These players wouldn't stand for oppression. But most importantly...

It's important to remember that the sentiment behind #TakeAKnee isn't new.

While Colin Kaepernick may have led the charge on this one, Martin Luther King and other notable civil rights leaders have peacefully protesting for equal rights for generations. Look how far we've travelled, and yet we still have a ways to go.