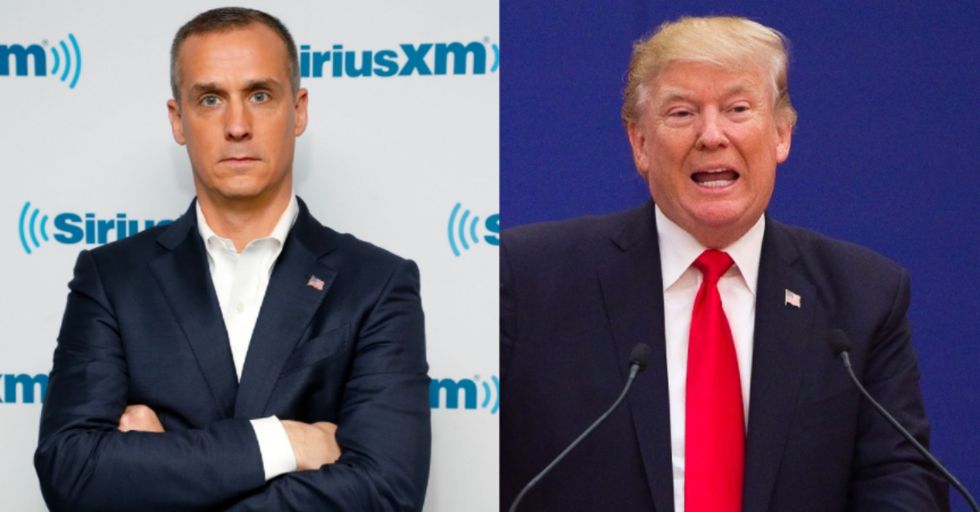 The campaign manager doesn't fall far from the president, it seems.

That doesn't really have anything to do with the accusations against Corey Lewandowski, but we're just going to bring them up every day until something is done about them.

But back to the story at hand — the Lewandowski accusations are terrible in their very own way.

Villa has filed a complaint with the police against Lewandowski and plans to meet with the Washington Metropolitan Police Department about it next week.

Villa — whose potential bid for congressional office has been endorsed by Donald Trump himself — says that Trump's former campaign manager slapped her behind several times at a party in late November.

Villa was at a holiday party at the Trump International Hotel in Washington when a friend brought her over to introduce her to Corey Lewandowski. They had never met before.

In an interview with Politico, Villa explained that she thought Lewandowski seemed dismissive of her and rolled his eyes when he thought she wanted to take a photo with him.

"I said, if you're busy, don't worry about it, we don't have to take a photo," Villa said, but someone pushed her toward him and they ended up posing for a photo anyway. "I'm wearing this silver suit and stretchy pants, and after the photo, he smacks my ass really hard," Villa told Politico. "It was completely demeaning and shocking."

Villa didn't let the incident go. In the moment, she confronted him. "I said, 'Watch it.' Half-joking, I said, 'I can report you for sexual harassment.'"

Lewandowski's response? "He said, 'Go ahead, I work in the private sector.' Then he smacks my ass again." What unbelievable grossness.

One of Villa's friends witnessed the incident and corroborated the details of the story.

However, this friend wanted to remain anonymous — partly because Lewandowski is still close to the president and still very influential in those circles. After, Lewandowski laughed in Villa's face "and ran away." "It was the most ridiculous thing I have ever experienced," Villa said. "It was shocking and gross." But it seems like Villa's story may not be the only one of its kind...

Villa said she was hesitant to go public with her story because of Lewandowski's prominent position in the political sphere.

Villa is considering a run for office, and she was fearful that coming forward could jeopardize her chances. "I did feel that Corey could badmouth me," she said. "I thought, 'What if this messes up my chances.' He has power and influence, and he's close with the president, who just tweeted about his book. I wanted to play it safe and avoid the drama."

Lewandowski has reportedly been eyed for a role as a staffer in the White House and has been close with Trump.

And so Villa's story puts Trump in an interesting position — side with the sexual assaulter who you want on your team and discredit a woman you've previously endorsed or denounce Lewandowski's assault and possibly allow the conversation about the allegations against yourself to be reignited?

We may actually already have Trump's answer to this seeming catch-22 — Villa is not the first person to accuse Lewandowski of sexual assault, and Trump hasn't seemed to mind thus far.

In March 2016, while Lewandowski was Trump's campaign manager, he was charged with simple battery after Breitbart News reporter Michelle Fields accused him of violently grabbing her arm at a campaign event.

Fields said she was knocked to the ground and was extremely shaken by the incident.

She even posted a picture of the bruises she claimed Lewandowski left on her arm. Although the incident was caught on camera, the charges were eventually dropped and Lewandowski denied that it happened. On Twitter, he wrote, "@MichelleFields you are totally delusional. I never touched you. As a matter of fact, I have never even met you." Gaslighting 101, folks.

Villa's complaint against Lewandowski proves that sexual assault and harassment is an issue that goes way beyond politics and party lines.

No woman, whether they tacitly support sexual assaulters with their politics or not, deserves to be sexually assaulted. And it was mighty brave of Joy Villa to put her political career on the line to hold a man accountable for his disgusting actions. "I did nothing wrong," Villa told the Associated Press. "I realized if he's not going to respond or apologize to me, I think it's the right thing to do."