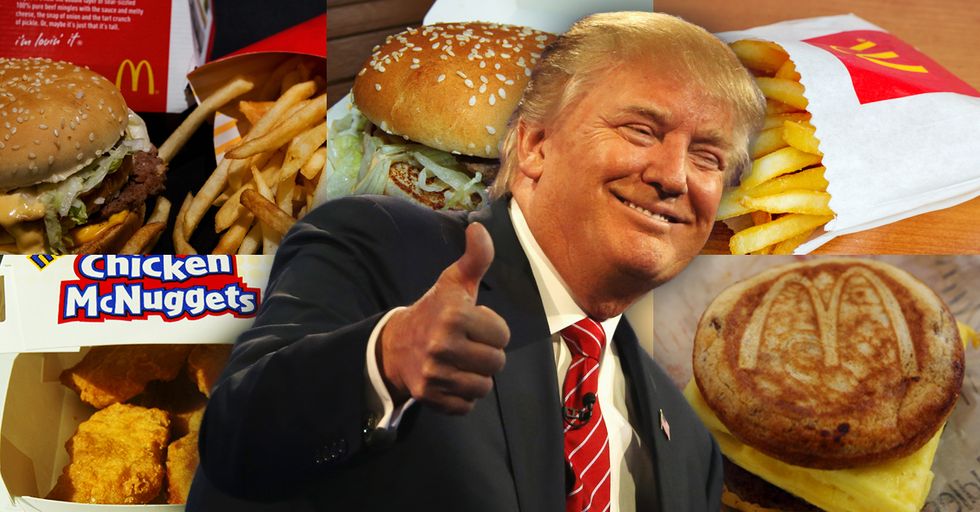 If you're anything like us, you're probably a little sick of reading about Donald Trump. We get it. But it seems like almost every day, a new story comes to light about just how ridiculous the man is, and we can't not talk about it, you know? Just in the past few days, he has both publicly endorsed a child molester running for Senate and possibly admitted (via Twitter) to obstructing justice. Every day it gets more and more amazingly ridiculous and we're left scratching our heads and wondering how we possibly got here.

Who doesn't? Food is great! But, like, Trump really likes food. He likes it a lot, and he likes a lot of it.

Even though he seems to have struggled with the proper pizza-eating protocol in the past:

We get it. Pizza is hard. Especially if your hands are too small to properly hold an entire slice. (Yeah, we went there.)

We've known that Trump is a fan of food for awhile, but a new book is coming out that reveals new details about just how much the current president ate while on the 2016 campaign trail. The book is co-written by Corey Lewandowski (Trump's former campaign manager) and David Bossie (the deputy campaign manager).

The book (called Let Trump Be Trump) hasn't yet been released, but The Washington Post shared a few anecdotes from it. "Sooner or later, everybody who works for Donald Trump will see a side of him that makes you wonder why you took a job with him in the first place," Lewandowski and Bossie wrote. "His wrath is never intended as any personal offense, but sometimes it can be hard not to take it that way. The mode that he switches into when things aren’t going his way can feel like an all-out assault; it’d break most hardened men and women into little pieces." That's actually not that hard to believe.

And then there's the food.

There's a lot of it, as previously mentioned. We've previously reported on Trump requesting the White House kitchen staff recreating McDonald's menu items during his presidency, but his love of fast food doesn't stop there. Apparently, Trump Force One (Trump's campaign jet, because that's a thing) was filled with four major food groups: McDonald’s, Kentucky Fried Chicken, pizza and Diet Coke. So, just what did Donald Trump order from McDonald's for a typical dinner?

Classic. They made McDonald's famous for a reason, right? If he stopped there, that wouldn't be too crazy. People eat Big Macs for dinner all the time. But this is Donald Trump we're talking about. He didn't stop there.

He'd also get a Filet O'Fish.

Now, correct us if we're wrong, but that is three sandwiches. Unless there are three people eating them, that is too many sandwiches. Two too many.

Then he'd get ANOTHER Filet O'Fish.

FOUR SANDWICHES. For one man! We are solidly in gluttonous territory here, folks. But we're still not done!

To top it off, Trump would get a chocolate milkshake.

Look, we all love some fast food every now and again.

But Trump's order is completely on another level. His dinner order is equivalent to 2,420 calories. (In case you're not aware, most people need about 2,500 calories in an entire day.) Trump shows no moderation in anything. Not even in his food consumption. And we can't say we're surprised.