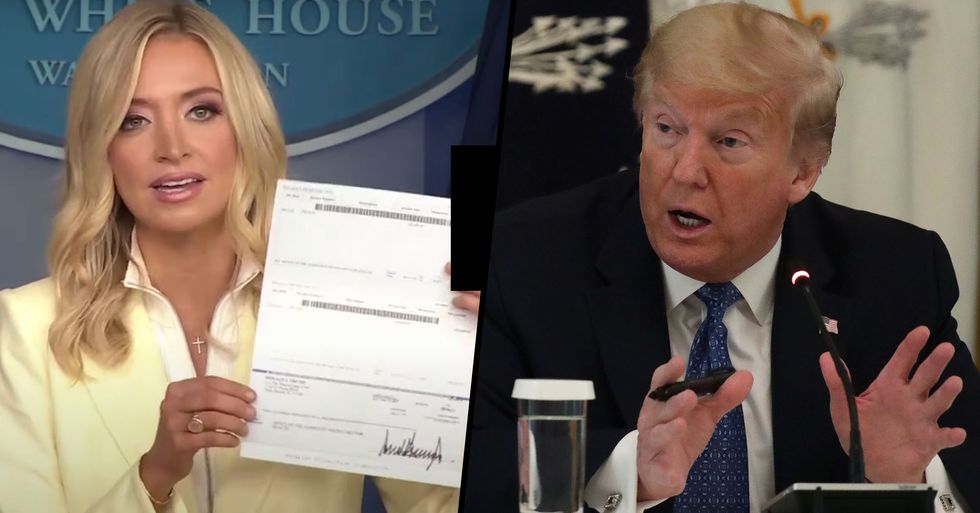 Click here to Start Free Trial Today
Donald Trump's press secretary revealed his bank account details on live TV on Friday, and it could have serious implications for the President...

President Trump continues to cause shock and outrage across the country...

But it seems that this time, it's the actions of his press secretary that could have serious implications.

They warned people against the use of their disinfectants as a remedy for the virus.

And this time, it comes courtesy of his press secretary, Kayleigh McEnany.

McEnany stood up to reveal that Trump would be donating his paycheque to the Department of Health and Human Services.

The move comes in a bid to "support the efforts being undertaken to confront, contain, and combat [the virus]."

In previous announcements like this, mock cheques are made to show the president’s donation.

But, McEnany held up the real cheque.

Which allowed White House reporters (and now, the entire world) to see all of Trump’s bank account details.

Officials from Trump’s administration have criticized the press for only focusing on whether the cheque is real...

"Today his salary went to help advance new therapies to treat this virus, but leave it to the media to find a shameful reason not to simply report the facts, focusing instead on whether the cheque is real or not," White House spokesperson Judd Deere told the New York Times.

But it seems the move could have serious implications for Trump.

Having his banking details exposed like this could potentially put him at risk of being hacked, or his account being used by others. Uh-oh... Want to learn about another official with a bizarre pandemic response? Scroll on for the story of the Peruvian mayor caught plating dead.