This was understandably a huge blow for the president... | 22 Words 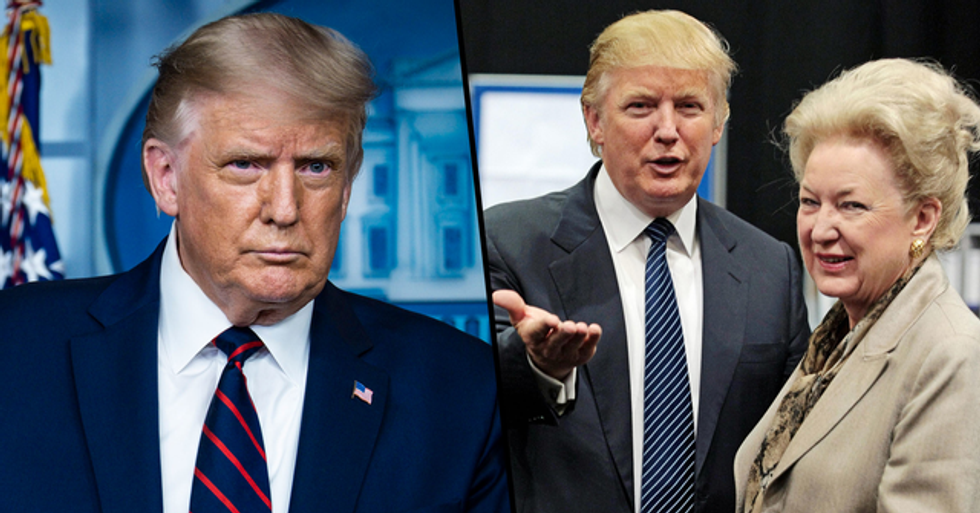 This was understandably a huge blow for the president...

And, ever since his death, people have been sending their condolences as he continues to work during this difficult time.

However, amid the heartfelt messages...

Audio that had been secretly recorded has been leaked...

And Trump's sister, Maryanne Trump Barry, can be heard saying some incredibly detrimental things about her president brother.

Since winning his place in the White House back in 2017, President Trump has consistently been embroiled in controversy and scandal.

But, remarkable, it wasn't a publicity stunt.

It's certainly been up and down - Trump has sparked his fair share of outrage, imposing a temporary travel ban on Muslims entering and leaving the U.S. and banning transgender people from the military, just for example. But he also passed a bill that makes animal cruelty a federal crime, and unemployment in the country was at an all-time low at just 3.6 percent.

But, despite his overwhelmingly loyal fan base...

Times are now harder than ever for the President. Since the coronavirus pandemic took over the world back in March, there's no denying that Trump has handled it awfully.

And Trump seems to remain completely oblivious to how catastrophic the coronavirus has been for millions of people.

But, last week, things got even worse for the president on a personal level.

Very sad to hear of the passing of Robert Trump. He was a successful businessman and philanthropist who led a co… https://t.co/23VRBr3LMs
— Lindsey Graham (@Lindsey Graham)1597609740.0

"It is with a heavy heart I share that my wonderful brother, Robert, peacefully passed away tonight."

It had already been reported that Robert Trump was seriously ill...

Details of his illness are yet to be confirmed, but it is known that he passed away at a New York hospital.

And the President and first lady could be seen accompanying the casket as it made its way down the front steps of the North Portico and was loaded into the hearse.

There has been even more family drama for the president.

Never-before-heard audio has been leaked...

And Trump's sister, Maryanne Trump Barry, who was evidently unaware she was being recorded, can be heard completely slamming her president brother.

The disgruntled sister had engaged in hours of conversations with Trump's niece, Mary Trump, who had secretly recorded the exchange.

Among some of the more critical comments made by Maryanne was commenting on how her younger brother operated as president.

"His goddamned tweet and lying, oh my God," she said, according to the recording. "I'm talking too freely, but you know. The change of stories. The lack of preparation. The lying. Holy s***."

She labeled him as "cruel."

She can also be heard saying that her brother is "unfit to be president"...

And even expresses her support for his presidential rival, Joe Biden.

Maryanne had some pretty eye-opening claims about his road to success, too.

She claimed that Donald had cheated his way to college, saying: "He went to Fordham for one year [actually 2 years] and then he got into the University of Pennsylvania because he had somebody take the exams."

Mary can be heard gasping at this accusation...

"No way!" Mary responded. "He had somebody take his entrance exams?" Maryanne then replied, "SATs or whatever... That's what I believe," before saying, "I even remember the name. That person was Joe Shapiro."

It's all incredibly scandalous.

You can listen to the full conversation above. Both Maryanne and President Trump are yet to comment on the audio.