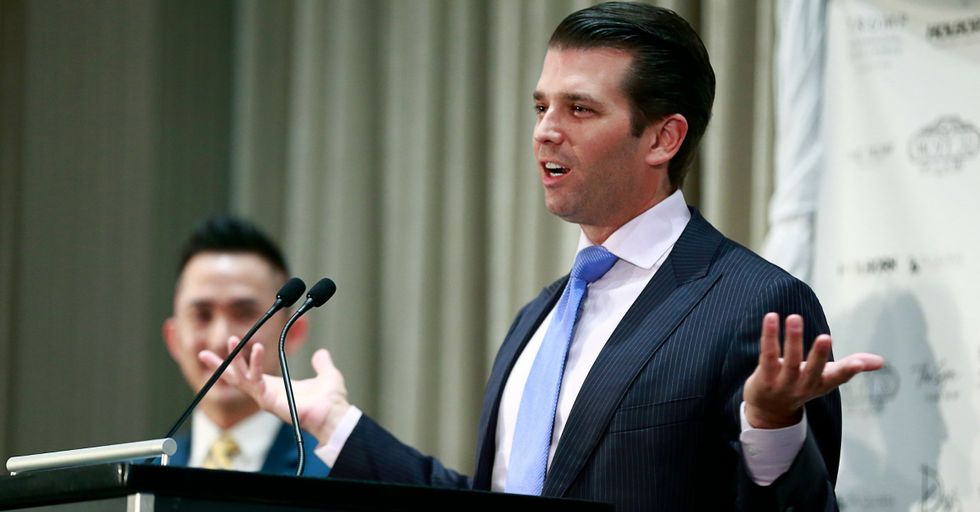 There are a number things Donald Trump Jr. should probably do, and at the top of that list is just "stop." But, he's a Trump, so that term is not in his vocabulary. Over the weekend, the son of the reality TV star turned president decided to insert himself into the ruckus over NFL players kneeling during the national anthem. Twitter responded, as it often does, by telling Trump Jr. exactly where he should go.

You might have heard about the President's controversial remarks regarding NFL players taking a knee during the national anthem.

The president called for NFL players who kneel during the anthem to be fired—despite the fact that the gesture is simply meant to as a peaceful protest of police brutality. When NFL commissioner Roger Goodell openly offered his support of the players, Trump Jr. decided it was a good time to weigh in with the above tweet.

Nobody was having it.

In addition to most of the internet just not really having the patience to deal with the opinions of yet another Trump, many noted the plain contradiction inherent in Trump Jr.'s attempted dig. The president had also bemoaned the league's new rules meant to curb head injuries.

Though a few Trump supporters came out of the woodwork, people were quick to burn them.

As Trump supporters pledged to "boycott the NFL," many pointed out that this was about as intimidating as past calls to boycott Starbucks and Hamilton. In fact, there's very little Trump's base has managed to actually "shut down," even though they definitely tried their best to get a Shakespeare play they'd never seen pulled.

Others pointed out the clear irony of a Trump demanding respect for, well, anything.

Mind you, President Trump is the same man who has insulted veterans, Gold Star families, and basically anyone who disagrees with him about anything at all. In fact, he's often the loudest to decry "politically correct" behavior. So it's a little rich for him to suddenly start acting like he's so concerned over people behaving "correctly" around the flag.

People also love to point out how Trump Jr. seems to have little personality of his own.

In fact, none of the Trump kids appear to ever have any major disagreements with their father, let alone individual opinions and tastes. In everything from their politics to their clothes, the Trump family feels like one big reflection of Donald himself.

Others simply had a quick reminder for the heir.

Trump Jr. was recently caught publicly trying to lie about a meeting with Russian government officials. He's currently under investigation as part of the government's probe into Russia's meddling in the 2016 election. He also got rid of his secret service detail for two weeks, possibly because he found out they were technically law enforcement officers and could be called to testify against him. It's something he should be worrying about much more than the NFL.

Generally, people just did not buy that this tweet was at all genuine.

Maybe it was that he was defending his dad while simultaneously contradicting his dad. Maybe it was his insistence on weighing in on a controversy that seemed trivial in light of his recent legal troubles. Maybe it was just his hair. Either way, people had a hard time believing Trump Jr. was actually worried about concussions.

Man, people really do not like him at all.

Mark this as the first time we've seen someone on Twitter referred to as a "pompous little jerk." Again, it must be the hair. Or the suits. Or maybe people—tired enough as they are of Trump Original—just can't stomach the watered-down version.

One guy even dropped an insult recently invoked by Kim Jong-un.

One interesting thing about the Trump administration is that it's been so consistently shocking that people the world over have been forced to find new ways to describe it. Recently North Korean leader Kim Jong-un introduced Americans to the word "dotard", which he used to insult the Presidents' mental abilities.

A fun thing to note is that while Roger Goodell is not under federal investigation, Trump Jr. very much is. So plenty of people took issue with the wealthy young man attempting to take the moral high ground. The irony is not lost on the Twitterverse.

Offering up some slightly NSFW imagery for what Trump Jr.'s words mean to them.

An apt visual metaphor for the circle of life at work: Donald Trump says something without thinking, doubles down on it, sparks controversy, and his kids step up to defend him, adding the fresh manure of their opinions to the Earth's soil. It might not be the most pleasant sight—but it certainly makes for some fun tweeting.