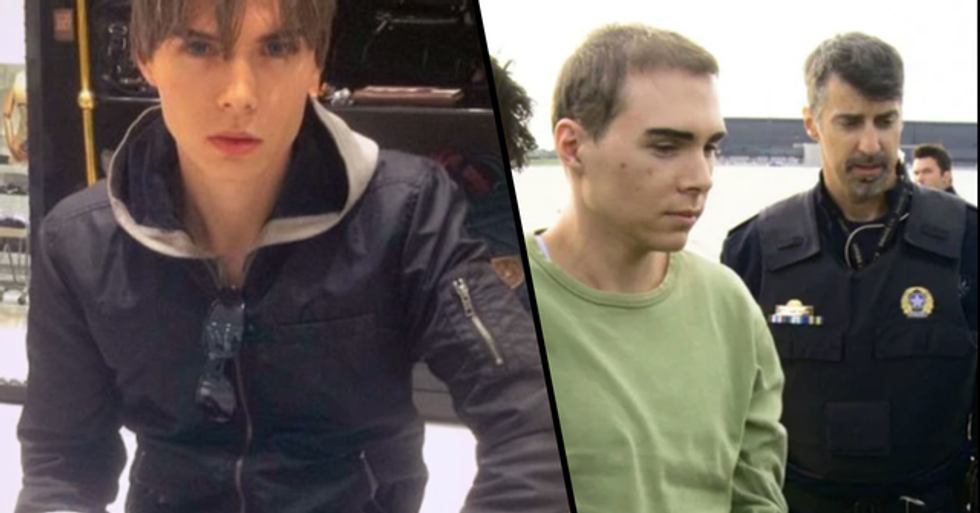 Unless you were living under a rock the last couple of weeks, you will have had some inkling about the grizzly new crime documentary, Don't **** With Cats: Hunting an Internet Killer.

The disturbing 3-part series, which festively dropped on Netflix just before Christmas, completely horrified and disgusted viewers all over the globe. But now, following the end of the series which saw the disturbing killer, Luka Magnotta captured and rightfully locked up, more disturbing details are emerging, and people are not happy...

We were all in for a rather grizzly surprise this Christmas.

Don't **** With Cats: Hunting an Internet Killer was the Netflix addition that none of us asked for.

Okay, Netflix has been pumping out the disturbing crime documentaries for a while now...

But their latest addition was far more distressing than their usual crime flicks.

None of us were prepared for what Don't **** With Cats had in store.

The documentary tells the true story of a group of social media users who, after watching some seriously upsetting videos of innocent cats and kittens being tortured and killed back in 2010, rallied together to hunt down the mysterious killer. Deanna Thompson - who used the online alias Baudi Moovan - was part of this online community, and sits as the leader of the discussion throughout the series.

The scenes in the documentary are simply heartbreaking.

And, though the killer's sickening actions were never fully shown, an idea of the monstrous things he did to the innocent animals were heartbreakingly evident.

Members of an online community were sickened...

And they feature heavily in the series, giving their own accounts of how they came across the videos, and how they ultimately decided to start tracking down the then-unknown psychopath.

They were all concerned about one thing...

...When was this person going to move onto humans?

The group was concerned about what the cat killer would do next...

And, because of his unknown identity and location, the police were unable to do anything. So, the online community made it their mission to track him down before he could hurt anything, or anyone else.

But then... It happened.

Disaster struck and, after months of taunting the people who were attempting to track him down, he released a sickening video that depicted him brutally murdering an innocent man as he slept, and then playing with his corpse.

The killer had committed his first human murder.

In 2012, Lin Jun, a thirty-three-year-old computer engineering student from China, was brutally murdered after he met up with a man, who was, in fact, the wanted cat killer, on Craigslist for a casual hook up. He was stabbed to death with a makeshift ice pick as he slept.

This is when the police started listening.

And, with the help of the online community and a lot of intricate and detailed examination into his videos, they were able to identify the killer as Canadian national, Luka Magnotta.

After being identified, Luka went on the run.

And the series goes on to document the dramatic, world-wide chase the police went through in order to capture the psychotic killer.

He fled to Europe.

But, evidently, he couldn't run forever. Luka was finally apprehended in an Internet Cafe in Berlin, Germany, after the shop owner recognized him from the news. Remarkably, he was caught as he sat and read news stories about himself.

And his sheer arrogance and vanity were evident in footage from his police interview.

Luka was seen sitting, arms folded, nonchalantly smoking on a cigarette... Not like a person who is feeling any sort of remorse for their actions.

Justice was finally served. Luka Magnotta was sentenced to life behind bars in Quebec’s Port-Cartier prison, where he still remains today.

But... Has justice really been served?

Some people think not.

It appears that Luka has been living quite the life behind bars...

And reports are saying that he has even found love.

Luka is now a married man.

He married convicted killer Anthony Jolin back in 2017, who he met on Canadian Inmates Connect, an inmate dating website. Jolin is serving life behind bars for stabbing an inmate to death while he was in prison for a separate offense. It sounds like a match made in heaven, doesn't it?

Luka's mom, who still insists that her son is innocent, served as the only witness at their ceremony...

According to the National Post, Yourkin said she was still "proud to be his mother" and that he was "not a monster." Oh, and neither men are allowed any time together unsupervised... For obvious reasons.

People are confused. How on earth was this allowed to happen?!

Though some pointed out...

How are we still single if someone like Luka Magnotta can find love?! For more on grizzly crime documentaries, keep scrolling to read about Netflixes latest series, which many are dubbing as even better than the Making A Murderer franchise...