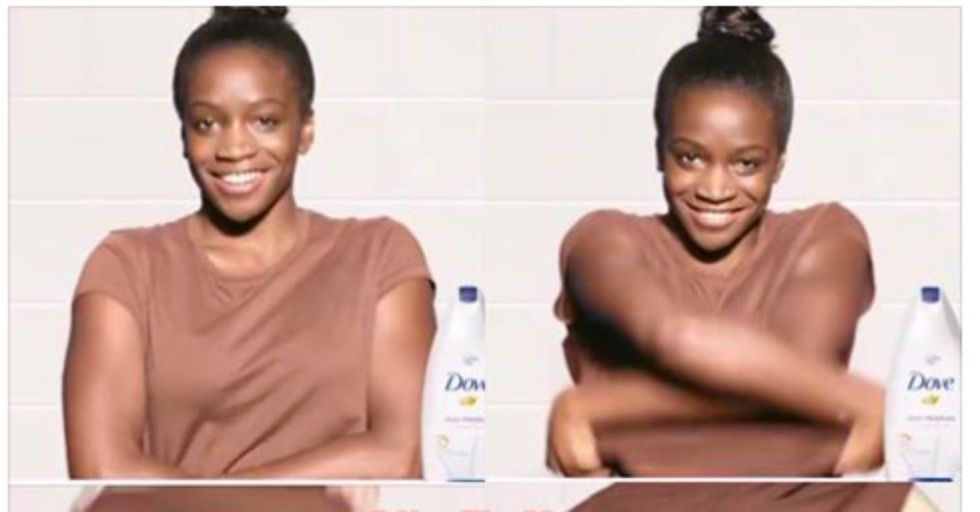 Dove is one of those companies that touts its inclusion of all types of women — women with curves, women who are over 40, and women of all colors appear in their ads.

That's why it was infuriating beyond belief when they posted an ad campaign that shows a black woman removing a dark t-shirt to reveal a white woman in a lighter t-shirt underneath. Another image shows the white woman taking off her shirt to reveal an Asian woman.

There's no real way to read it other than that your skin gets lighter as you use Dove soap, and the backlash was immediate. Unfortunately, and surprisingly, this isn't the first time Dove has been called out for racist ads.

"So I'm scrolling through Facebook and this is the #dove ad that comes up.... ok so what am I looking at...." she wrote. Her post went viral; it has been shared over 10,000 times. People were immediately livid. There is simply no good way to spin this.

Most were incredulous and disgusted that a company like Dove could be so tone-deaf about race, especially in today's fraught social climate. Some pointed out that soap advertisements have a long, racist history, and this seemed to fit right in. Basically, Dove should have known better.

When Naythemua commented on the ad on Facebook, Dove initially responded with this explanation:

They tried to explain away the racism that was so clearly evident. It doesn't matter what the intentions of the commercial were. Any company, and especially one that's supposedly as sensitive to these topics as Dove is, should know better.

Following the insane backlash they received, Dove released this apology:

An image we recently posted on Facebook missed the mark in representing women of color thoughtfully. We deeply regret the offense it caused.
— Dove (@Dove)1507400866.0

They admit that they "missed the mark" in attempting to represent women of color, but for many, that sentiment wasn't enough. Film director Ava DuVernay tweeted in response: "You can do better than 'missed the mark.' Flip + diminishing. Deepens your offense. You do good work. Have been for years. Do better here."

Some aren't as convinced by Dove's "good work," however.

According to this Twitter user, this isn't the first time Dove has posted racist ads. And he's right...

Complexion Magazine joined the conversation to remind us of this problematic Dove ad from a few years ago:

In it, you can see the black woman positioned as the "before" and the white woman as the "after." Come. Onnnnn. There's just no excuse for advertisements this blatantly racist.

In another instance, Dove marketed this product as "nourishing lotion for normal to dark skin."

News flash: Dark skin is normal, Dove. It's clear that Dove isn't testing these advertisements enough with women of color. They've "missed the mark" on more than one occasion and haven't seemed to learn their lesson. If Dove doesn't get it together, they're going to lose a lot of customers.