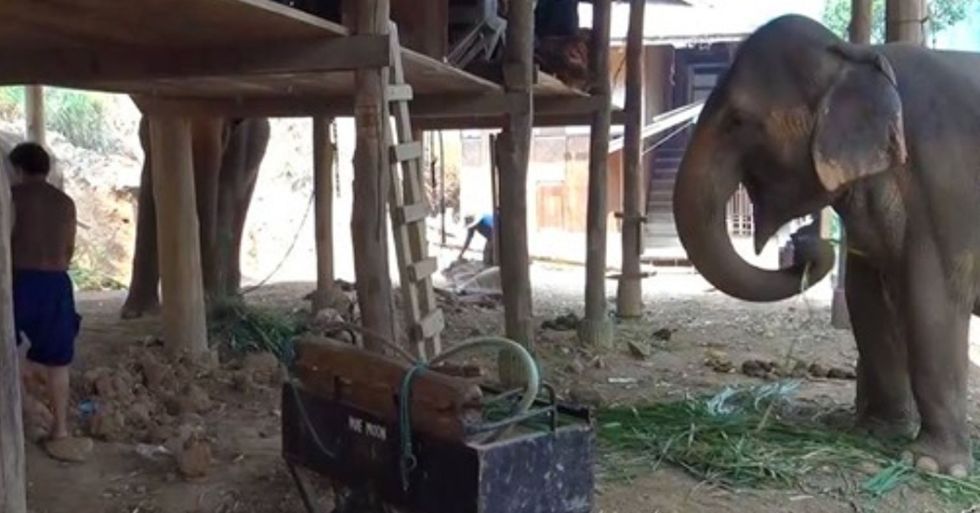 Dozens Of Elephants Set Free As Camp Closes to Public

Asian elephants are a greatly respected species in Asian continents, and locals will go to great lengths to protect their native animals. But in recent times during the COVID-19 pandemic, people have been self-isolating... leaving these magnificent creatures to roam freely.

Now, the group of elephants who have now been set free from serving tourists, and the video is unbelievable...

The Asian elephant is a majestic species.

With it being the largest mammal on the Asian continent, this species of elephant is greatly respected in cultures all around Asia.

They are extremely sociable animals...

The Asian elephant is usually spotted in groups of around 6 or 7 females, and they are known to join other groups of elephants to form a larger group.

And they are very much loved and respected across the Asian continents.

They symbolize wisdom and royal power...

And many religious groups worship these beautiful animals.

These elephants are that loved, in fact, that they are celebrated every year...

The Elephant Festival in India is celebrated every year in Jaipur, and it focuses solely on the Asian elephant and its contributions to Indian culture. It attracts thousands of guests and it is very much a big part of Indian culture.

But the festival has caused controversy in the past...

The Elephant Festival isn't the only celebration to use the animals, however...

The Temple of the Tooth, Buddhism's holiest shrine in Sri Lanka, holds the annual festival with traditional drummers and dancers as well as nearly 100 tamed Asian elephants.

The elephants involved in the festival are trained and come from sanctuaries...

But this sadly doesn't apply to all elephants...

They promote the humane treatment of elephants and all wildlife...

They encourage the kind and respectful treatment of all elephants...

The foundation gives tourists and guests the opportunity to visit and meet the elephants that are under their care, which involves bathing, stroking, and feeding the animals, rather than riding them.

And as for the wild elephants...

Tourists are encouraged by locals to respect the natural habitats of the animals and to give them their space at all times.

In the recent months, the population of us humans roaming around has dwindled thanks to the COVID-19 pandemic.

People have been self-isolating all around the world...

Especially in China, which is where the virus was first discovered back in December 2019.

Businesses all around the world have been forced to alter or close due to the lack of tourism...

And Maesa Elephant Camp in Chiang Mai, northern Thailand is one of those.

Every day for the last forty-four-years, the elephants at Maesa have had huge wooden and metal carriages strapped to their backs, on which they would carry tourists.

This is no life for an elephant.

But thanks to the drastic drop in tourism, seventy-eight of these elephants have now been set free after years of hard work.

Elephant riding is a huge tourist attraction in Thailand.

Camp director Anchalee Kalampichit said in an interview, "since we entered the business in 1976, riding on the elephants has always been the favorite activity of tourists."

The elephants have been liberated from their work.

"But because the coronavirus has spread there have been fewer tourists and eventually the government ordered us to close, so we have removed the chairs to liberate the elephants," she went on to explain.

Because the seats have been disposed of, it is looking unlikely that these elephants will ever carry tourists again.

"We will welcome tourists to enjoy learning about the elephants’ ways of life naturally instead of using them to entertain the tourists," Anchalee said.

The camp will be completely transformed when it reopens...

The elephants are now free to explore the grounds, with the camp set to operate as a place for visitors to observe the animals when it reopens.

It will be a struggle financially, however...

"The cost of taking care of the elephants and 300 staff is 5 million THB ($153,685) per month. So for now, we have to bear that expense without income from tourists," Anchalee went on to explain. "But we will not leave anyone behind and will try to take the best care of the elephants for as long as we can. Now we are planting vegetables for the staff to eat as one of the ways we can reduce the expenses."

Watch the video of the Elephant Camp here...

And make sure to keep scrolling to learn about the "anti-poacher" who has saved hundreds of wild elephants and rhinos...