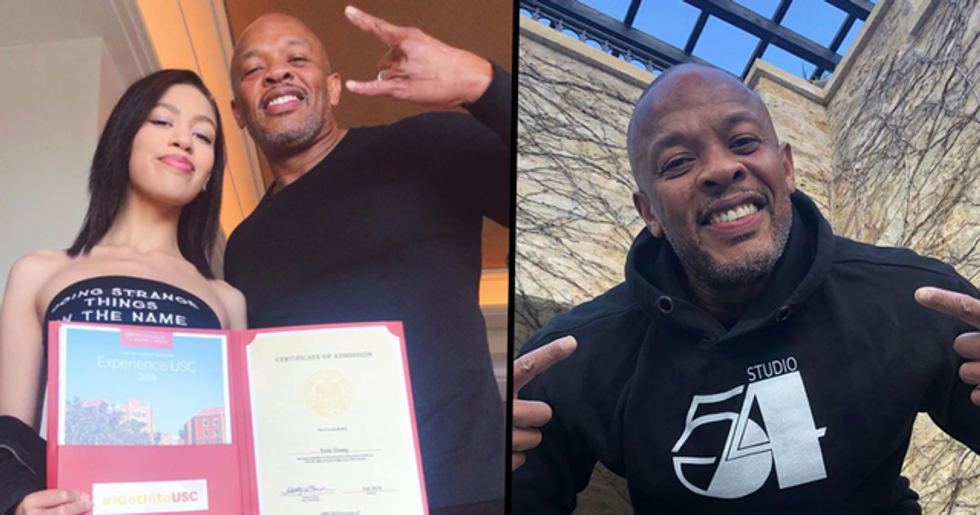 Although many had suspected it for a while, recent revelations have shown the public just how corrupt the US college system really is. With stars Lori Loughlin and Felicity Huffman facing real jail time over their alleged fraud attempts to get their kids into prestigious colleges, people are finally paying attention to how, exactly, students are making the cut.

Never one to shy away from controversy, it seems that rapper and entrepreneur, Dr Dre, has recently thrown some fuel on the fire. He posted what some are seeing as a rather incendiary picture to his Instagram as he celebrated his daughter's acceptance to USC. Eagle-eyed fans noticed that he seemed to be throwing shade at Loughlin and Huffman, as his caption for the image boasted, "No jail time!!!"

However, some noted that although Dre wasn't part of any allegedly illegal activities, he had certainly helped his daughter out with her college acceptance - just in a slightly more subtle way.

College is a huge part of many people's life plan.

Getting into the right school is often seen as a being a step in the right direction for a lot of young people; it can lead to more opportunities, including better career prospects and a better future as a consequence of that.

For some parents, it can become and all-consuming need.

Getting their kids into a prestigious school can become an intense motivator for some parents - and there are a select few who will do almost anything to get what they want.

And a recent scandal proved that some of these parents are quite well known.

Celebrities were revealed to have been allegedly partaking in fraud in attempt to get their children into the schools they wanted. One of the accused is Felicity Huffman, star of Desperate Housewives.

The other high-profile name in the story is Lori Loughlin.

Loughlin is best known for her portrayal of Aunt Becky on ABC sitcom Full House. Her daughter, Olivia Jade Giannulli, is a popular YouTube star.

The scandal was investigated by the highest of offices.

The FBI uncovered the underhanded tactics and broke the story of what's being called one of the biggest scandals of the year so far.

As you may expect, the internet went wild for the story.

It really had it all - criminal allegations, celebrity stars, and an underlying message about the issues with meritocracy, particularly in the US.

Some were feeling a little smug when the story came out.

It feels good to know that you've earned what you have purely through hard work and above-board, genuine means - especially when you know that there are people out there that are willing to cheat, and even break the law, to get to the same place.

People thought that the whole thing was also kind of funny.

Imagine working at the FBI and everyone around you is uncovering crimes by the President, and you get assigned to w… https://t.co/q8QQg4fZLd
— Zack Bornstein (@Zack Bornstein)1552426953.0

Witnessing the serving of just desserts is pretty great - and the fact that the FBI themselves were the ones to discover the alleged crimes of television stars makes it all a little sweeter for some people.

Some made a very salient point.

Rich people use their money to scam and get their dumb kids into a good college?!?!?! #collegeadmissionsscandal https://t.co/sZAsnVeDgG
— Sonny Trujillo Jr. (@Sonny Trujillo Jr.)1552437519.0

The idea that rich people can use their money to get what they want is hardly surprising, but when we found out that it was Lynette and Aunt Becky that were guilty of doing such things, we just couldn't help but feel that little bit more disheartened.

The scandal is emblematic of a wider problem.

While the #CollegeAdmissionsScandal gets the headlines, the real issue is all the systematic, legal ways that discr… https://t.co/2wEXEbwedE
— Tricia Ebarvia (@Tricia Ebarvia)1552989335.0

The fact that these parents allegedly used illegal bribes to get their kids into a good school exposes the corruption that many were already aware of.

Because people with money have pretty much always had an advantage.

Particularly when it comes to college admissions. Wealthy parents are able to "donate" to a school, which ultimately helps their children get into that school if they apply. This can be in the form of a lump sum of cash, or in paying for buildings to be built on campus!

Legacy preferences are also something many take issue with.

If you're the child of a particular school's alumni, you may end up being more likely to get in, regardless of any of your own merit, which is another way privilege can affect college admissions.

And now another celebrity has stumbled into the scandal.

Andre Romelle Young, better known as Dr Dre, is a rapper, producer and entrepreneur. Alongside his impressive rap career, he's the founder of Aftermath records and Beats Electronics.

Dre rose to fame as part of rap group N.W.A.

He's had some huge hits including "No Diggity," "Nuthin' But A G Thang," and "Deep Cover." In recent years, Dre has worked with Kendrick Lamar on songs for his 2012 smash album, "Good Kid, M.A.A.D. City."

Dre has been the most recent participant in the college admissions scandal.

But not because of any alleged fraud. It seems that Dre has stumbled into the story by accident, with a potentially ill-thought-through Instagram post in praise of his daughter's college acceptance.

He posted a snap with his eighteen-year-old daughter, Truly Young.

In the image, Young is proudly showing off the acceptance letter from USC, while Dre looks like a very proud father. Congrats, Truly! But it was the image's caption that got everyone talking.

Beneath the picture, Dre wrote: "My daughter got accepted into USC all on her own. No jail time!!!"

Many saw this as Dre calling out those who have been caught up in the college admissions scandal, those that are facing jail time for their alleged discretions.

The rapper looks hugely proud of his daughter's accomplishment and we love it!

While some were quite excited to see Dre so proud of his daughter's accomplishments, others had a slightly different reaction.

Some people pointed something out...

The caption was all very well and good - but how true was it, really, that Young had been accepted into USC without any of Dre's influence? Some pointed out that that isn't necessarily true.

Because although Dre hadn't partaken in any bribing, exactly, there was still an exchange of cash between the star and the college.

And a rather large exchange, at that. So Dre's assertion that his daughter had been accepted to USC "on her own" may not have been entirely accurate.

In fact, Dre had almost certainly helped to get his daughter in.

In the past, Dre had made such a large donation to USC (along with Jimmy Lovine) that the college ended up naming a building in their honor. The donation is reported to have been around seventy million dollars!

Some people thought that the post was a bit misleading, considering the indebtedness that USC undoubtedly feel towards Dre. We have no doubts that Truly probably deserves her spot at USC, but to claim that she was treated exactly as any other student at the college would have been, simply seems a little delusive.

Some fans were pretty annoyed.

Just when you think a celebrity can't be a bigger asshole #DrDre says hold my beer #USC #collegeadmissionsscandal
— Ulanda (@Ulanda)1553450828.0

Indeed, it does seem that Dre was attempting to shame parents like Loughlin and Huffman, which is pretty ironic, considering he's equally as guilty of using wealth to get what he wants.

Some drew attention to this fact.

Dre has always been open about his difficult upbringing, and the fact he pulled himself up by his bootstraps. So many saw the fact that he donated to an elite institution, rather than to a cause that helps people who truly need it, as slightly problematic.

But it's not like this hasn't always gone on.

Some fans point out that it has long been a tradition for the wealthy to ensure the best possible futures for their kids, and believe that Dre didn't do anything wrong.

Because it's true, Dre will face "no jail time."

His donation was all totally above board, and he has never made any attempt to hide his donation.

Fans pointed out something else, too.

The amount of money that Dre was willing to spend to ensure his child's place was far, far higher than what any of those accused by the FBI were willing to spend and this money went towards students' education, rather than into the pocket of a corrupt admissions officer.

Some thought the internet had missed the point of Dre's post.

One account amusingly postured that Dre was, in fact, using the post to flex his huge donation to the university, rather than simply to throw shade at Loughlin and Huffman.

Although this probably isn't the case.

Our evidence? Dre has since taken his post down - which could be viewed as an admission that the original caption probably wasn't a great idea. Perhaps in this instance, it would have been better to celebrate Truly's accomplishment without mention of jail time.