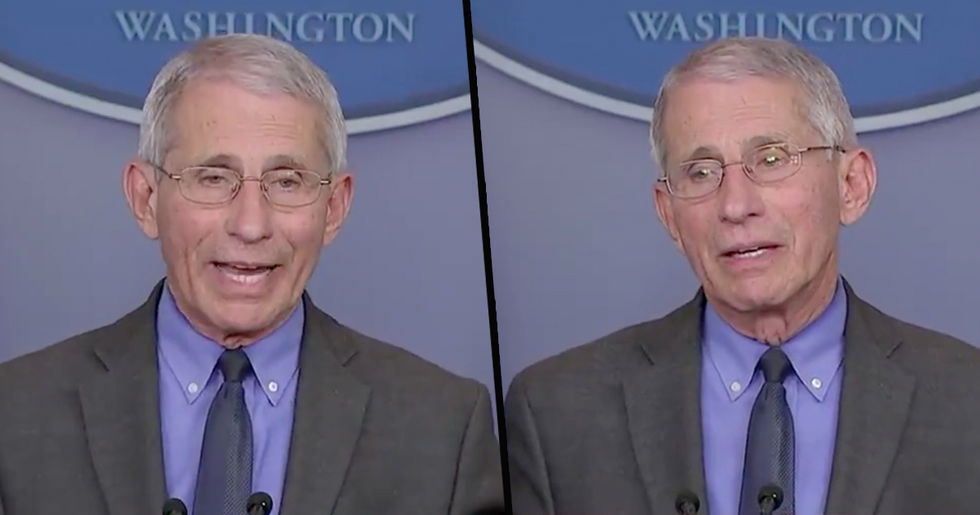 During the current pandemic, we are seeing regular press briefings.

In a recent one, on Tuesday we saw Dr. Anthony Fauci praise the LGBT community for their strength during the HIV/AIDS epidemic.

Whilst this may not seem significant, the fact he did it in front of Vice President, Mike Pence, is.

Keep reading to watch the heroic criticism for yourself.

Officials, including President Trump, gather to talk over the approach to the current pandemic.

In one briefing that happened on Tuesday, we saw something quite surprising.

Something from Dr. Anthony Fauci.

Dr. Fauci is one of the most prominent members of the Task Force for The White House.

And he is widely regarded as one of the world-leading experts on infectious diseases.

A rather forward move, given what Mr. Pence has supported during his career.

Dr. Fauci praised the community for their "incredible courage and dignity and strength and activism" during the HIV/AIDS epidemic.

A statement that came after he had discussed the disproportionate effects of the virus on African-Americans.

Dr. Fauci had said "When you're in the middle of a crisis like we are now with the virus, it really does ultimately shine a very bright light on some of the real weaknesses and foibles in our society,"

At which point he made the comparison of how the LGBT community was affected by the AIDs epidemic.

Fauci even added that at the time, there was an extraordinary stigma, particularly against the gay community.

Under the watchful eye of Pence, he said, "And it was only when the world realized how the gay community responded to this outbreak with incredible courage and dignity and strength and activism — I think that really changed some of the stigma against the gay community, very much so."

It's a topic that Dr. Fauci knows a lot about having advised 6 presidents on HIV/AIDS.

One of which was on the President's Emergency Plan for AIDS Relief (PEPFAR), a program that leads to saving millions of lives throughout the developing world.

Given Mr. Pence's history of support.

It was a interesting move to make, one that Mr. Fauci seemed unfazed by.

Mike Pence has previously supported many anti-LGBT laws throughout his career.

Some of his previous support includes the backing of legislation that would jail same-sex couples for applying for a marriage license.

He also tried to use AIDS funding to pay for gay conversion therapy.

Whilst a governor of Indiana, Pence signed a "religious freedom" law. This allowed business owners to discriminate against LGBT customers.

This isn't the only time that Mr. Pence has listened to people criticizing homophobia in front of him.

Possibly some are even an indirect dig at the Vice President.

Pence has also been directly criticized.

Last year, the Minister of Defense in the Government of Ireland, Leo Varadkar, who is openly gay, made a comment directly aimed at Pence.

Leo Varadkar said that he should be "judged by my political actions, not by my sexual orientation".

Adding that he is from a "country where freedom and liberty are cherished."

Leo Varadkar further said "We are, after all, all God's children", challenging Pence's religion.

It seems that there are many who are willing to challenge homophobia in front of Pence after all. Keep scrolling for more on the White House, and who may be getting a pardon fro President Trump himself...