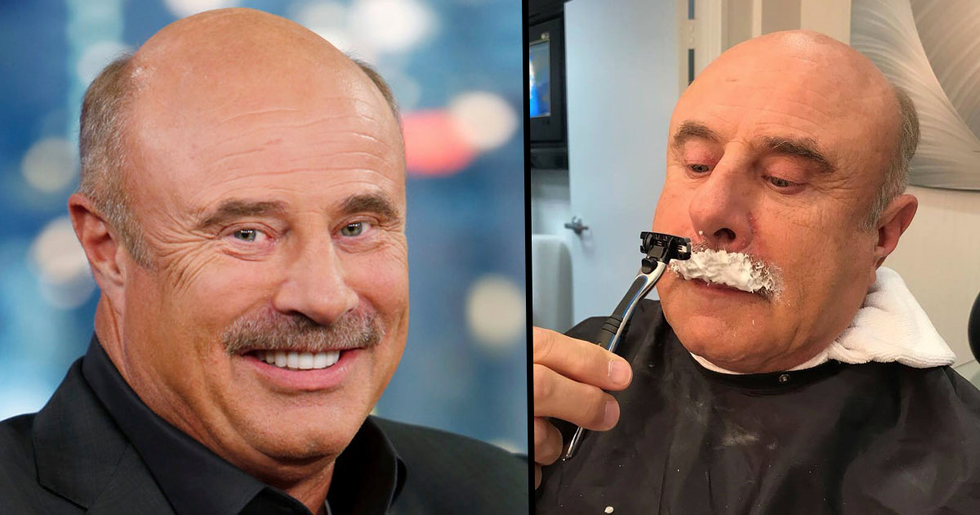 Dr. Phil is probably as much known for his trademark 'stache as he is for his straight-talking advice. So we were shocked beyond belief when we heard the news that he has shaved it all off! What would he look like? Would we even be able to recognize the new and possibly improved (although we have our doubts) Dr. Phil sans his mustache?

Take a look at the bottom of this page to see for yourselves!

This isn't the first time that he's braved to shave! Yes, that's right, we have not one, but two photos of Dr.Phil without his manly mustache and we can barely contain our excitement!

This is the Dr. Phil that we all know and love.

His full name is Phillip Calvin McGraw and he is most famous for helping America deal with their many issues on his own TV chat show, Dr. Phil.

And he actually is a doctor.

Dr. Phil earned a PhD degree in clinical psychology from the University of North Texas in 1979. It was here that he met Frank Lawlis, who would later feature on Dr. Phil as the show's psychologist.

Dr. Phil had always wanted to be a psychologist.

He was born in Oklahoma alongside three sisters, but his family relocated so that McGraw could follow his dream of becoming a doctor.

But his future could have turned out very differently.

In 1968, aged eighteen, Phillip was awarded a football scholarship to the University of Tulsa. He played middle linebacker and, apparently, he was very talented. And look no mustache! But this isn't the "other" time that we were talking about... keep scrolling to see another pic of Dr. Phil all clean shaven.

He started out hosting a self-improvement seminar with his father and a lady from Texas called Thelma Box.

"Pathways" claimed to be "experience-based training which allows individuals to achieve and create their own results." Seems a little suspect to us, but we know some people swear by these life-affirming seminars.

Not too shabby for someone who is just starting off in their career! But he "forgot" to mention to both his father and long-term business partner Thelma that he was selling up. Naughty Dr. Phil!

The real turning point in his life happened in 1995 when he met Oprah Winfrey.

McGraw's legal firm was hired to help Oprah prepare for the Amarillo Texas Beef Trial and when she won in 1998, she decided to thank Phil by inviting him to appear on her show.

And the rest, as they say, is history.

McGraw proved to be immensely popular with both her guests and her viewers and so Oprah invited him to be her show's resident Relationship and Life Strategy Expert - whatever that is, exactly! Basically, he helped people sort out their sh*t.

Then he decided that he should share his knowledge a little more comprehensively.

So he wrote and published his first best-selling book, Life Strategies. And he most certainly did not stop at one. In the next four years alone he went on to publish three more best-sellers, offering people advice on their lives and relationships.

In 2002, the iconic Dr. Phil TV show was created and here he is in action.

Phillip formed his own production company and with the help of Oprah's Harpo Studios, he was able to launch his very own television show. And it quickly became a massive success.

But boy, has he had to deal with some serious issues over the years.

Like this father who admitted to enjoying hitting his daughter. Dr. Phil sat in disbelief with this couple but, thankfully, he managed to pull it together and give them some much needed sound advice on how to deal with their daughter. We don't think that we would have been so calm in that situation.

And there was this girl who shared her desire to "rip people's heads off"...

How Dr. Phil managed to remain so cool, we don't know. High school bullies can be the worst but Dr. Phil earnestly tries to help her explore her anger issues. This is the side of Dr. Phil that we love.

Despite his success, there was a time in which Dr.Phil decided to branch out and try his hand at something a bit different.

He entered the world of weight loss. Dr. Phil created a range of shakes, supplements, and energy bars called  'Shape It Up, Woo, Woo!'. He even wrote a weight loss book! We literally cannot imagine that Dr. Phil has ever said "Woo, Woo", ever, but who are we to question their marketing strategy?

But many were unconvinced about Dr. Phil's credentials in the weight loss industry.

So in 2004, his products were pulled from the shelves by the Federal Trade Commission. A year later, several people who had bought his products filed a lawsuit against him, which he settled for an epic $10.5 million.

Not that this would have had much effect on his finances.

Between 2014 and 2015, Dr. Phil made an estimated $70 million, and by 2017 this had risen to around $79 million for that financial year. He's definitely starting to look a bit more handsome to us now. Just check out his mansion!

But, it turns out, he's done something similar in the past! Back in 2010, after forty years of having a mustache, Dr Phil shaved his mustache off during The Oprah Winfrey Show and the result was dramatic, to say the least. Without being mean, he definitely looks a little more creepy without it. But just wait until you see his latest transformation. It's somehow even worse!

Looks aside, though, according to his first wife, McGraw was not necessarily the ideal husband.

Debbie Higgins married Phillip in 1970 when he was just twenty-years-old, but the marriage only lasted three years. Debbie has since revealed that her husband was domineering and that he thought the woman's place was in the home, carrying out her domestic duties. Duties which included weight lifting to improve her boobs, apparently! Charming!

Some people really think that the Dr. Phil that we see on TV is all just an act.

In 2008, Dr. Phil decided to organize an "intervention" for the troubled Britney Spears who was, at the time, in hospital suffering from mental health problems. Did he really care about Britney's wellbeing or was this just a way to create more publicity around his show? Some people are pretty adamant that it was all just a publicity stunt.

He has been known to be, shall we say, be a little mean with his guests.

This girl may not be perfect, but we don't think she deserved this brutal shutdown by Dr. Phil. Good for ratings. Bad for his image. What do you think?

And don't even get us started on some of his Tweets.

Someone who has been in the public eye for the amount of time that Dr. Phil has should know what is and what is not acceptable to put out in the public domain. Note to Phil: implying that drunk girls are likely to be raped is probably not a good idea.

And the controversy does not end there.

Most will probably remember his interview with former actress Shelly Duvall (she played Jack Nicholson's wife in The Shining) which was just awful to watch. She was clearly a very unwell woman at the time and many thought that Dr. Phil was taking advantage of her to yet gain boost his ratings.

But for some reason, a lot of women find him hot...

Apparently, he's like a big cuddly teddy bear. Albeit with a bit of a mean, chauvinistic side. Hm we're still not seeing it...

His current wife certainly seems to!

Dr. Phil married Robin Jameson in 1976 and after more than forty years together, they seem more loved-up than ever. Apparently, it's down to a mixture of surprises and regular romantic holidays. She has barely aged in years, so he must be doing something right.

He certainly likes to play around with his look.

Here he is celebrating St Patrick's Day last month by dying his mustache bright green! May the luck of the Irish be with you, Dr. Phil.

Dr. Phil posted a video and two pictures on his Instagram page.

He appeared to be shaving off his trademark mustache. Yikes!

But no fear, he later revealed it was just an April Fool's Day prank!

Thank god for that! His mouth looks naked without his signature mustache. And not in a good way....