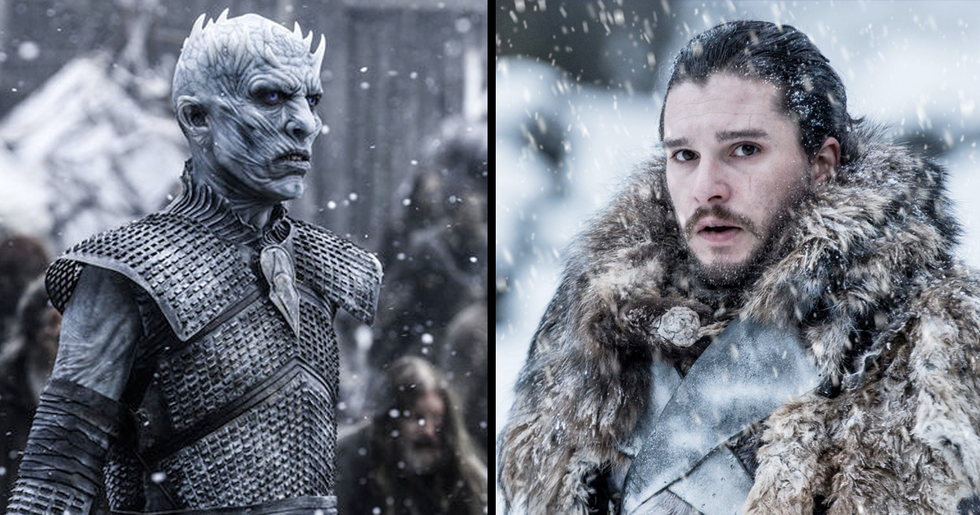 Episode one of the final season of Games of Thrones finally aired last night after nearly 600 long days without our favorite fantasy drama of all time.

And it was definitely worth the wait.

Despite there being a little less action than we expected in the first episode, it still managed to be as enjoyable as ever with multiple awkward moments between characters that had fans in stitches.

Because we don't want you to have to do all the hard work, we've rounded up all the best ones for you.

Expect extreme displays of jealousy, sarcasm, incest and of course, looks that could stop a White Walker dead in their tracks.

Make sure you check out Cersei's own vision of Noah's Ark, that she sadly did not get.

This post contains some major spoilers, you've been warned!

The final season of Game of Thrones has been a long time coming.

Or to be more precise, 595 long days! And the first episode of Season 8 definitely did not disappoint.

It might not have started with a bang so to speak.

But that didn't mean that it wasn't exciting viewing for fans who couldn't wait to see all their favorite characters again.

It was reunion galore.

Tyrion and Sansa meet up. Jon sees Arya. And Bran? Well, Bran pretty much sees everyone but no-one seems particularly keen to chat to him. We wonder why?

Not to mention the amazing CGI scene with the dragons.

Breathtaking to watch but also so crucial to Jon Snow's family heritage and his true identity.

Plus, the terrifying White Walker death swirl made another appearance.

And this time it was made from a collection of human limbs! With Ned Umber at the center!

But it was the awkward moments between their favorite characters that fans couldn't get enough of.

It wasn't long till they took to social media to share a whole host of hilarious jokes and memes depicting these uncomfortable encounters.

The long-awaited moment that Jamie Lannister set eyes on Bran Stark for the first time in forever.

These two have not seen each other since Season 1, Episode 1 when Jamie pushed Bran out a window and paralyzed him. #Awkward.

If looks could kill.

It's a good thing that Bran and Jamie have a lot of access to ice as this was one cold, hard stare between them. Not that we can really blame Bran. But did he have to act so strange?

We can only imagine what was going through their heads at this point.

Did anyone else notice that Bran seemed to be doing a lot of intense staring throughout all of this episode? Kind of a "Do you know who I am? " and "Don't f*ck with me!" vibe.

It was just so damn creepy.

Bran will definitely be turning up in our nightmares tonight and for the foreseeable future!

It was even worse for other characters.

That moment you realize you have been sleeping with your aunt. Poor Jon Snow learning that his gorgeous lover Daenerys Targaryen is actually a relative. Gross! On the plus side, you've just found out you're a king!

Did everybody already know?

That horrible feeling when you suspect that everyone else already knows something you have just found out. And of course, it's much worse when they look all smug about it.

It was his most loyal friend Sam who had to tell him.

That can't have been easy! "You are Aegon Targaryen, heir to the Iron Throne, 6th of his name." Say what now?!

And then when Daenerys made her revelation to Sam.

Sorry dude, my pet dragon Drogon incinerated your father and brother. No hard feelings though? She is stone cold.

I take full responsibility for my actions.

Perhaps a case of too little too late Daenerys? To be fair Sam's father was a bit if a d*ck, but his brother didn't really do anything wrong.

This would be a bit of a letdown, to be honest.

But it might actually work. Those death stares are something else altogether.

We got this, dudes.

Step aside, the Starks are on the way to save the day!

Another 'if looks could kill' moment.

That was without a doubt a threat. A thinly veiled threat. Ouch.

This one's a low blow. Literally.

Tyrion to the eunuch, “You shld consider urself lucky. At least ur balls wont freeze off.” be freezing off.” Eunuc… https://t.co/blopvgnqwA
— Miye 🇲🇿🇱🇸🇿🇦🇿🇼 (@Miye 🇲🇿🇱🇸🇿🇦🇿🇼)1555323979.0

Possibly the funniest conversation in this whole episode. What did the dwarf say to the eunuch? LMAO.

When you are trying to keep the peace but don't know how.

Poor Jon Snow desperately trying to make light of the tension between the Lady of Winterfell and the Dragon Queen. Sorry bro, nothing you can do or say will make the interactions between these two any less awkward.

And playing all innocent won't work either.

Jon, we know you were thinking with your d*ick and not your brain. And Sansa knows too. You can deny, deny, deny all you want but we got you on this.

A bit of f*cking perspective, please!

"I get it, you have your doubts about Daenerys but can we please focus on the f*cking white walkers knocking at our door?"

"It had its moments." LMAO.

Ouch. We felt that Sansa. We wonder what specific event you could be referring to!

It's always nice to see a character growing.

And Sansa has come further than most. Sure, she started out as a naive young girl who seemed to have little strength compared to other strong female characters but boy has she proved us all wrong. Her ability to emotionally manipulate other characters is insane and we truly commend her for not breaking despite all the sh*t she has been through.

Sansa is definitely one of our favorite characters and we just can't wait to see what she does or says next.

She's even been cracking dad jokes.

It's these punchy and hilarious one-liners that really made this episode of GoT.

Is it too much to ask for a few bloody elephants?

With everything else going on, it was brilliant to see Cersei focusing on what was really important. The need for wooden boats to transport an army of elephants across the sea, of course.

And did Cersei remind you over anyone in particular?

What is it with these women and their need for powerful animals? Not that we would want to stand in their way! #AnimalRage

...On the subject of powerful creatures.

So glad they included my favorite scene from Harry Potter in the season premiere of #GameofThrones https://t.co/GCyJLYwqFq
— Katie Stern (@Katie Stern)1555293569.0

We loved the scene where Jon and Dany took a dragon ride through the North! But fans couldn't stop themselves pointing out how much it reminded them of a certain wizard. We can kind of see where they are coming from. Now we just can't wait to see what hilarity is in store for us in episode 2!