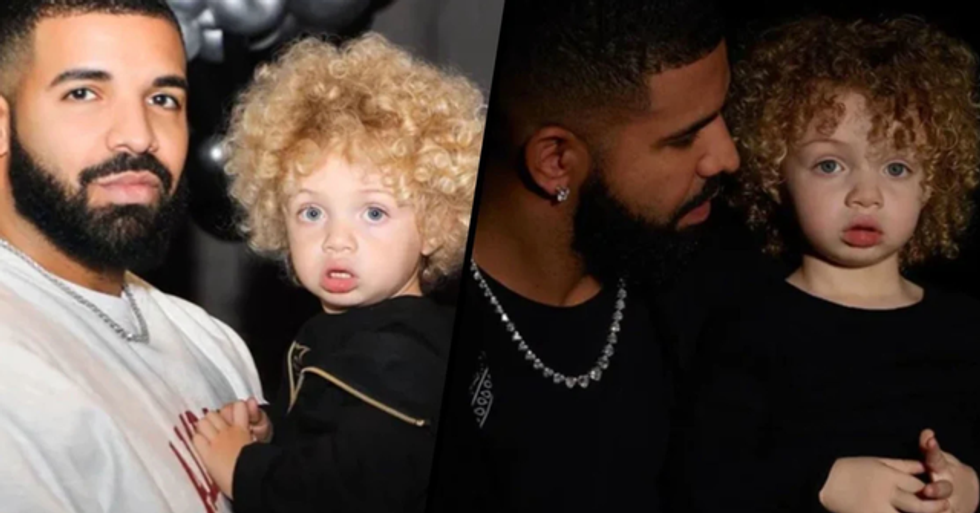 Ever since Drake shared a photo of his son with the world for the first time, people have noticed how dissimilar the little blonde-haired, blue-eyed child looks to his dark-haired father.

And, evidently, Drake noticed it too, because he has now revealed the extreme lengths he went to just to make sure the child was actually his.

Drake is all over social media at the minute.

But if somehow you're not up to date with one of the world's most iconic rappers, here's a little overview... Aubrey Drake Graham, known best by his stage name "Drake", is a rapper, singer, actor, and producer.

Drake quickly established himself in the music industry.

After releasing his first mixtape titled, Room for Improvement, his music career took off.

The album featured some famous faces.

Some of his most famous tracks are nothing short of iconic.

After these major hits, the rapper took a break.

But after his much-needed break from music, he made a sudden return to the scene with new tracks.

It came as a big surprise.

The thirty-three-year-old dropped 2 new tracks. One was called “Chicago Freestyle" and the other “When to Say When."

Drake kept the arrival of his child, Adonis tightly under wraps.

His son's existence was kept a secret until fellow rapper Pusha T released a diss track outing him for being a father, which forced Drake acknowledging his son on 2018 album Scorpion, rapping on one track called "March 14", "I wasn't hiding my kid from the world, I was hiding the world from my kid."

And, earlier this year, the singer finally opened up about his son, which was a first since his birth in 2017.

Drake discussed that he initially didn't see eye-to-eye with the mother of his son, Sophie Brussaux. But the pair have now put aside their differences and they co-parent their child together as friends.

And, on Monday, we had our first glimpse at his child

Drake shared some highly-anticipated snaps of him and Adonis along with a heartfelt message about how he loves and misses his "beautiful family."

And, for the first time since his birth, she shared some pictures of Adonis onto her own Instagram, after only ever posting pictures covering his face.

But, regardless of the beautiful message and wholesome family snaps, fans were shocked.

The blonde-haired, blue-eyed toddler wasn't what anybody was expecting, especially considering both Drake and Sophie are brown-eyed and dark-haired.

Sophie was quick to address the elephant in the room.

She commented on Adonis' blonde hair and joked that both her and Drake were naturally blonde, adding an edited picture of the pair with blonde locks.

"Thanking God every day for blessing me with such a beautiful family and amazing friends. I wish that much on everyone, keep safe and positive, sending a lot of positive vibes to the world. PS: all this time you thought @champagnepapi was dark-haired…but Adonis’s parents are really blonde."

The edit of Sophie donning blonde hair is quite convincing.

Drake on the other hand... well, that's better left unsaid.

It is still unknown how Adonis got his gorgeous blonde hair.

However, you can definitely see Drake in the little guy's features.

And others have pointed out that Drake's mom has naturally curly blonde hair.

Okay, now I can see the resemblance...

But, apparently, we haven't been the only ones to wonder about Adonis's unusual appearance.

The rapper has admitted that he himself questioned Adonis's true heritage and actually wondered whether he was his real father.

He even had 2 DNA tests carried out on his son.

In an interview with Rap Radar from December last year, Drake can be heard explaining: "To be honest with you, I did a DNA test for my son and it came back to us and it said the DNA test got ruined in transit and they couldn't be 100 percent sure that that was my son or not."

He continued: "He's a stunning child you know, with the brightest blue eyes and at the time I was like 'I don't know'."

And he revealed that the DNA uncertainty was actually the reason behind him keeping his son out of the media spotlight for so long.

"So, I was in a really weird pending situation where I didn't want to go tell the world that that was my son and it wasn't... It actually wasn't until a week before the album came out that I got confirmation that that was definitely my son."

But fatherhood hasn't stopped Drake from his old antics.

Keep scrolling to read about his recent public flirting with old-flame, Rihanna...