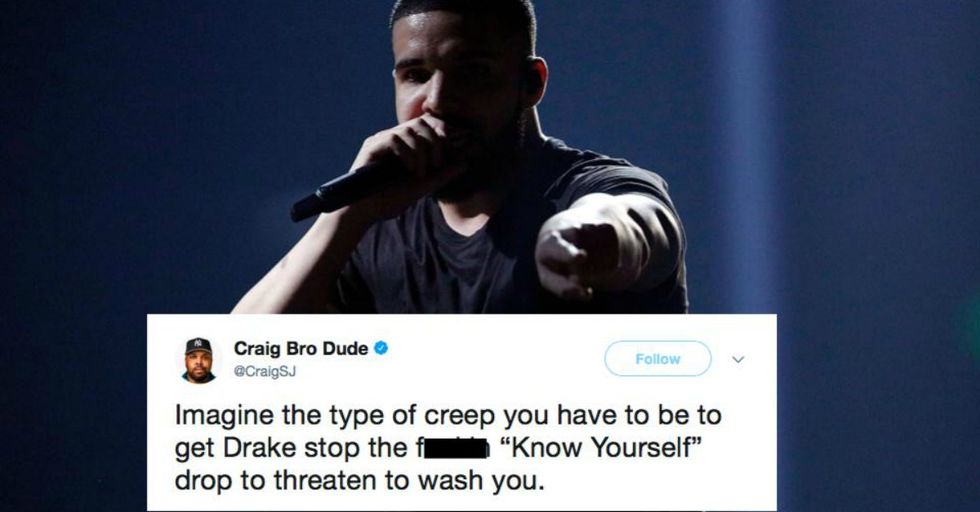 Quadruple threat (writer, singer, rapper, actor) Drake has been on his Boy Meets World tour, which has spanned at least 13 countries, countless venues and been remarkably profitable for all involved. One performance at London's O2 Arena even netted Drake $13 million, a very nice chunk of change for the former Degrassi star.

But not everything has been roses and champagne for the Champagne Papi.

On Wednesday, Drake did a show at the Kudos Bank Arena in Sydney, Australia.

As he performed a set at the afterparty in the Marquee club, which is housed inside the Star casino, the most assault-prone casino in Sydney, a fan started groping women in the pit.

That's when Drake did something amazing.

He stopped the show so he could call out the handsy fan. "If you don't stop touching girls, I will come out there and f*** you up," Drake says.

The crowd went wild, but Drake wasn't done yet.

"If you don’t stop putting your hands on girls," the rapper continued, "I’m gonna come out there and f*** your ass up."

People were quick to point out that Drake has recently been on a fitness grind, so he might have felt emboldened to follow through on his threat.

It's no secret Drake has been working on his bod for the past couple of years.  The rapper has given up his white wine spritzers and pastas for a life of burpees and deadlifts. Drake is certifiably swole now, so he could conceivably kick someone's ass.

Seriously, Drake has really been into his fitness these days.

Remember what Drake used to look like? He was sort of thin, but fast forward to 2016 when the workouts really started to pay off. But that's not all...

In light of the Weinstein scandal and the myriad of other assault scandals that followed, Drake might just be more aware of what's happening around him.

Imagine the type of creep you have to be to get Drake stop the fuckin “Know Yourself” drop to threaten to wash you.
— Craig Bro Dude (@Craig Bro Dude)1510766820.0

It's well known that concerts and festivals are hotbeds of rape and sexual assault. In fact, Leo Terrell, a California-based attorney, put it this way: “Sexual assault have become commonplace because of the combination of alcohol, drugs and the extreme lack of security. These venues are often breeding grounds for overly aggressive men to commit crimes of violence."

Drake did an awesome thing by stepping in.

He was taking one step in the many necessary to make concerts a much safer, more inclusive environment for all attendees, and for that, we say – "You go, Drake!" But there's a long way to go to ensure concerts are safe for everyone.