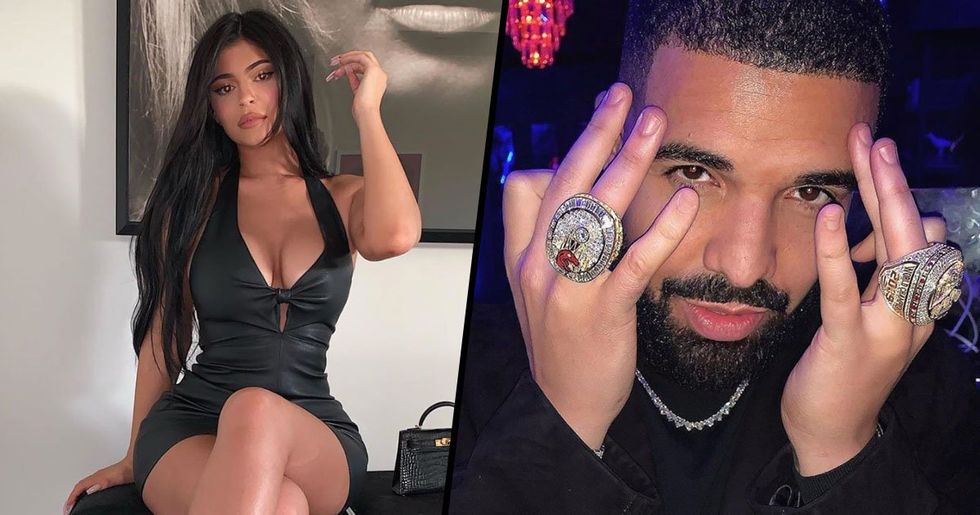 Kylie Jenner and Travis Scott have inevitably had a very public relationship. Given Jenner's part of one of the most famous families in the world, owning her own beauty empire, and with Scott's booming rap career - it's hardly surprising that every part of their relationship is scrutinized within an inch of its life.

The pair have called it quits after weeks of trying to make their relationship work.

At first, it seemed Kylie was set to return to her ex, Tyga. There was even a cryptic Snapchat to "prove" it.

But then, Kylie was linked to a different star. At Drake's birthday party, sources claimed the two seemed to be getting rather close.

And now fans have unearthed some lyrics Drake wrote about Jenner in an unreleased track - and it's not very flattering!

Last year, the star was crowned by Forbes as the youngest "self-made" billionaire. Her staggering net-worth has also made her the wealthiest of the entire Kardashian-Jenner clan.

The pair were together for 2 years and are parents to 1-year-old Stormi.

Since going Instagram-official, Jenner regularly posted snaps of her man, and when it goes on social media, you know it’s serious.

The couple seemed to have a perfect relationship.

The pair officially called it quits.

According to reports, the 2 are now "both single" and are "walking away from their relationship." The news came after Scott was notably absent this weekend in South Carolina, where Kylie attended Justin and Hailey Bieber's wedding with Stormi, but without her beau.

They were last seen together at Travis's Netflix documentary premiere.

It seemed to come pretty out of the blue...

The couple had recently posed for Playboy magazine looking rather smitten. Sources claim that the pair have "been trying to make the relationship work for a while," and that they decided to split.

That being said, Kylie and Travis had reportedly taken a break in their relationship before...

... And have always seemed to have managed to work it out.

But then, Kylie hit headlines for another potential love.

And this time, it's not someone she's dated before.

It's none other than Champagne Papi.

Yep, you read that right. Rumors have started that Kylie has been getting close to Drake.

It all started at Drake's birthday party.

On the 24th of October, the "Hotline Bling" star turned thirty-three years old and celebrated in style.

His party was star-studded.

One unexpected attendee was newly-single Adele. Many were hoping these two may see sparks fly - but according to partygoers, there was a different lady catching Drake's eye.

Kylie Jenner was, after all, also newly single.

"They seemed to be enjoying each other’s company. They were joking around, and Kylie was laughing. She seemed to be really happy and in a great mood and her and Drake seemed very comfortable with each other. There seemed to be an attraction there," said a source.

"She spent the most time near Drake and his friends," said another.

"Kylie was rapping to songs and dancing with her friends while she was next to Drake, but they weren’t dancing together; they seemed to have a connection though."

But it seems that's all in the past.

"Yeah, I got 20 motherf***in’ Kylies." Yikes.  Kylie seems to be able to stir up controversy wherever she goes! Scroll on for her latest bizarre scandal.
34%