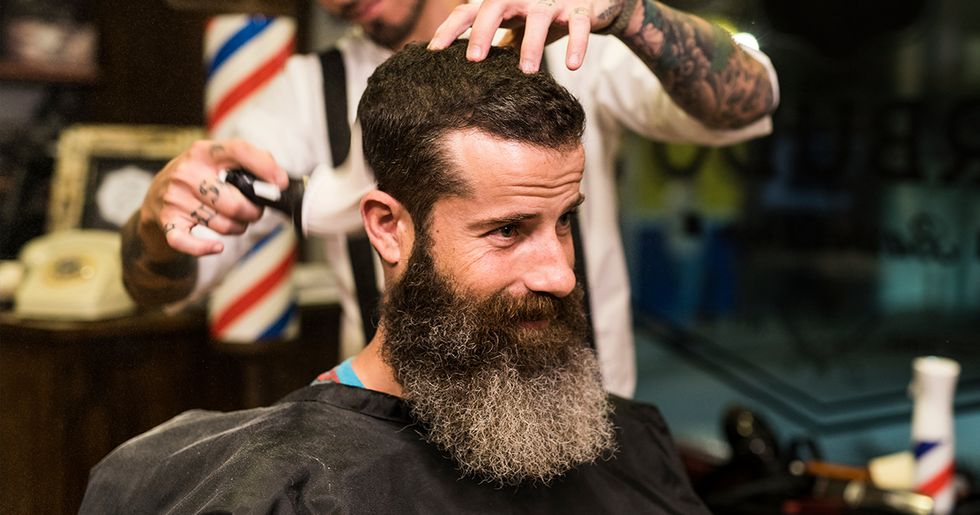 Beards are magical. Beards are glorious. Beards could be little nests for tiny birds if they want to. That is how wonderful beards are. Beards have the power to make someone look totally different. Some people are completely unrecognizable when they have beards. Beards can make a person look dapper and put together or kind of unkempt and a little wild. There are also so many different types of beards for different styles!

Are you a chinstrap dude or a burly mountain man? A five o'clock shadow connoisseur or a soul patch expert? Maybe you are straight up Santa Claus. Who knows?! What I do know is that beards are super cool, they can make you look like a new human being with minimal changes, and I would grow one if I could, but sadly I cannot. The beard transformations you are about to see will blow your mind. So get ready to witness the power of facial hair.

They're also extremely useful. I don't necessarily recommend eating noodles out of your own facial hair, but I do recommend making over your whole face with a beard!

This guy went from looking like the dude who played tuba in high school band class, to being a legit male model.

This guy has good hair, man! He just went from having a ton of good hair to like, a more manageable amount of good hair.

Oh! I guess this guy isn't a member of ZZ Top. Could have fooled me with the picture on the left.

No, really...this guy's actual name is Nick. Can't believe he came all the way from the North Pole just for a haircut!

Is this man a professional selfie taker? Because these are some amazing selfies. He should like, teach a class or something.

It's not just the lighting that's different in these photos! It's like Grizzly Adams got a makeover!

I understand trimming the beard. I think that was a good move. But that dude can never touch that mustache. It's perfect.

Before his haircut, you couldn't even see that he has a giant neck tattoo! I'd say that's false advertising, my dude.

Do you think this guy watched Tidying Up and Marie Kondo taught him that his scraggly beard bits no longer sparked joy?

Look at how much hair came off that man's beard! And it's still really long!

Super snaps for a twirly mustache! To be honest, I am loving this whole look.

There was no cutting involved in this amazing transformation. Just a little TLC and grooming.

He sort of had that old prospector look going in, but now it's more of the college professor look.

This is why you never give up on your dreams. Because sometimes an awkward patch of hair becomes a beautiful beard.

Great faces. Great haircut. Next, let's work on straightening out those glasses. As a glasses-wearer myself, the photo on the left pains me.

I mean, this beard routine should get a 10/10. It's amazing. It should win in the beard grooming Olympics.

It's truly epic to see four different stages of a beard trimming. I personally like the mutton chops in the upper right corner.

I mean, this guy seemed to have a Chewbacca-amount of hair, but the beard trim and the haircut makes him look completely different!

A tiny bit of shaping can go a long way. There wasn't much length taken off this beard, yet it manages to make this dude look completely different.

O captain, my captain! It looks like this guy sails a ship, and if he doesn't, he should probably start.

Who knew that under all that hair was a dapper young version of Conan O'Brien during that period where he decided to grow a beard?

This guy may instantly regret his beard trim, but I think he looks great! In fact, his whole face looks different. In a good way!

Two years is a long time to grow a beard, but ultimately, it's got to make you feel good!

I don't know about you, but what I'm seeing is two very recognizable versions of Zach Galifianakis.

Look at this photograph!

Get it? "Look at this photograph"? Because that guy totes looks like the lead singer of Nickelback. Share this with a bearded friend for some beard-spiration!
20%