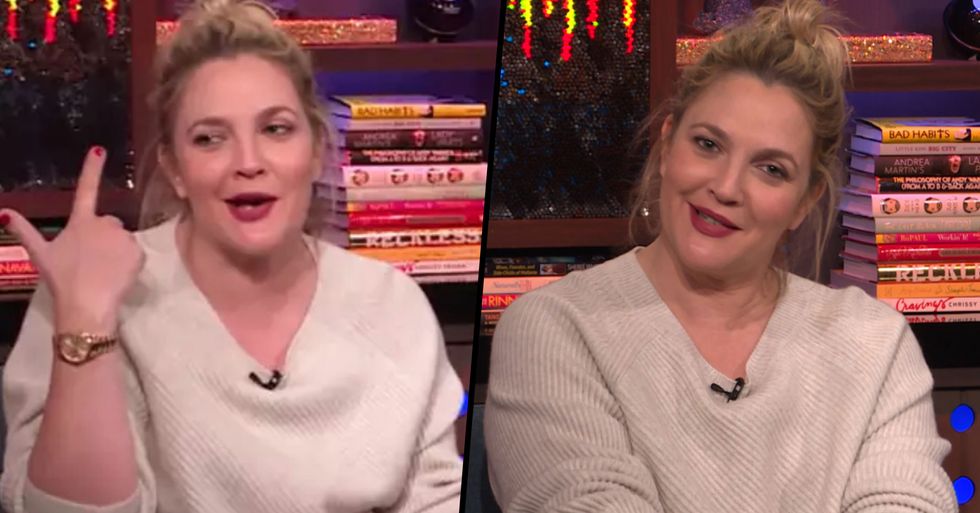 Drew Barrymore has opened up to Andy Cohen this week about a time she was on his show, and she says she will never forgive herself for it...

The actress got candid with Andy Cohen.

She opened up about a time she was on his show 2 years ago.

And claims she will "never" forgive herself for it, for one huge reason.

At just 7 years old at, Drew rose to fame in a movie we all know and love...

The star comes from a long line of actors.

The star made her big-screen debut at the age of 5 in Ken Russell's Altered States.

But of course, her most famous role came 2 years later in 1982's  E.T.: The Extraterrestrial.

After working on the movie, she plummeted into the spotlight.

But things quickly started to derail for the child star.

Her mom soon began taking her to night clubs, and it was at Studio 54 and the China Club that Drew started to develop substance abuse issues... before she was even a teenager.

Drew was placed in a rehab center, later writing about the experience in her autobiography, Little Girl Lost.

Drew quickly earned the reputation of being a troubled wild child.

Her nightlife and constant partying became a popular headline generator for the media.

But sadly, aged fourteen, she tried to take her own life, which landed her back in rehab, followed by a 3-month stay with singer David Crosby and his wife. "She needed to be around some people that were committed to sobriety," Crosby said.

That same year, Drew's petition for emancipation was successful.

And saw her move into her own apartment aged fifteen.

Due to her reputation, Drew struggled to find work.

Film projects were slow to materialize, though, she did make some minor films, including Irreconcilable Differences, Firestarter, and Cat's Eye.

In the '90s, she began starring in a series of films that many say exploited her wild-child image.

Through all this, she continued to make headlines for her controversial behavior.

The star posed nude for spreads in Playboy and Andy Warhol's Interview, and then exposing herself on live TV to a shocked David Letterman during his Late Night show birthday celebration.

That year, the star co-founded a production company, Flower Films - which would go on to produce several big hits. On top of that, she gave a solid performance in the movie Boys on the Side, co-starring with Whoopi Goldberg, and Mary-Louise Parker.

Over the next few years, Drew proved her strength as a rom-com lead.

The actress earned praise when she co-starred in the popular comedy The Wedding Singer alongside Adam Sandler and in Ever After with Anjelica Huston. The following year, Drew also earned her first credit as an executive producer with the comedy Never Been Kissed, in which she also starred.

The actress went from strength to strength.

As we moved into the '00s, Drew produced and starred in the smash hit flick Charlie's Angels, performing alongside Cameron Diaz, Lucy Liu, and Bill Murray.

Raking in more than $40 million in its opening weekend alone.

The star continued to gain huge mainstream success throughout the '00s.

Producing/starring in movies such as Charlie's Angels: Full Throttle, 50 First Dates, and He's Just Not That Into You.

As well as acting, Drew has had a successful career as a model.

Becoming the face of CoverGirl Cosmetics and Gucci Jewelry in 2007, followed by being honored as the top pick on People magazine's "100 Most Beautiful People" list that same year.

There is no doubt that Drew has managed to completely turn her life around.

She now has 2 kids and has been able to firmly cement her status as a huge player in the movie and modeling industry.

But there's one thing, she says, she will never forgive herself for.

And that's a 2018 interview with Andy Cohen.

The actress opened up about her appearance on Watch What Happens Live.

Drew spoke to the host, Andy Cohen, on the latest episode of her digital series The Drew Barrymore Show for the "The Art of the Interview" episode.

During the episode, Drew got onto the topic of taking accountability.

And apologized for Cohen for the way she acted during her March 2018 appearance on his show- where she was joined by her Santa Clarita Diet co-star Timothy Olyphant.

"It was on your show, and I drank too much and I have never forgiven myself, nor will I ever forgive myself," she said.

"Whatever personal thing I do, nobody sees it even though I'm an imperfect person, and I tout that," she added. "And I've had that liberty since I was a kid because it was all out there and it was either boo hoo about it or say, 'God, it's sort of redeeming to not have to pretend to be perfect.'"

"But I really want to apologize to you because I really -- I just, I will never let that happen again," Drew added. "I'm so sorry."

Cohen reassured the star, saying that he's used to people having one too many on his show.

"I don't even really have a totally clear memory of it, but you don't need to apologize to me for being overserved on my show, that happens," he said. "You're in a great club of people."

You can watch a clip from the appearance in question below.

For more like this, scroll on to see a list of famous actors as kids compared to now...
20%