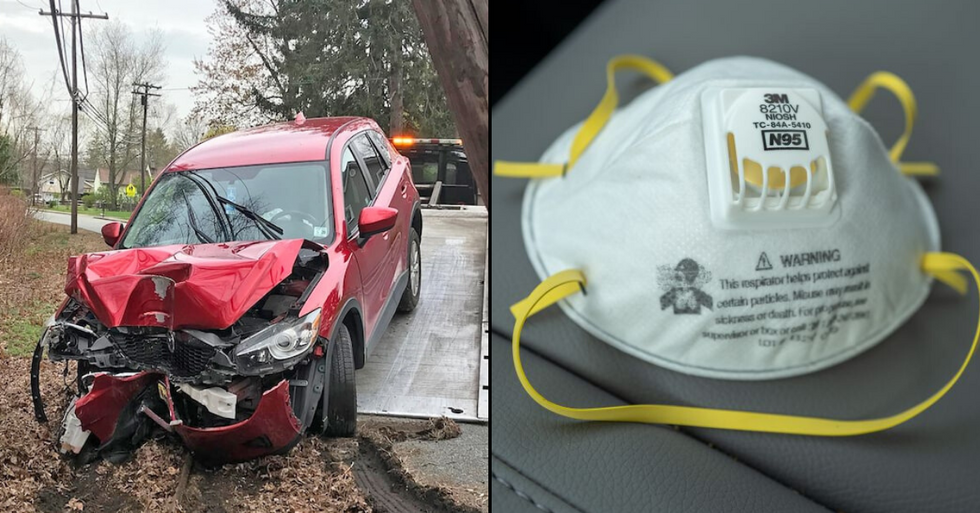 Driver Crashes Car After Passing out While Wearing N95 Mask

Throughout the pandemic, one of the things that has always been a prominent issue is PPE. From frontline workers not having enough of it to the argument over whether the general public needs it at all, masks, in particular, have been a hot topic.

But this week, as the debate heightens, a driver sporting a protective mask ended up crashing his car, local authorities say. Keep scrolling for the shocking images and to find out why the mask had a part to play...

The ongoing debate: should or shouldn't we wear masks to protect ourselves?

We've heard all about the pros and cons, and even whether masks should simply be reserved for frontline workers only.

Those of us at home still need to leave the house occasionally for essential items such as food.

And when we do have to leave our house...

Many have been urged to don face masks and latex gloves in an attempt to avoid coming into any form of contact with the virus.

It seems quite simple, doesn't it?

Wear a face mask and keep your hands covered with gloves… It really couldn’t be clearer.

People have truly taken this and ran with it.

People sporting these face masks can be seen almost everywhere.

But, if they aren't used correctly...

They are said to be fairly ineffective. In fact, many people who are healthy are being told that they don't even need to wear a mask unless they are around someone presenting symptoms.

N95 masks are among the many types that people are buying...

Despite the fact that the FDA recommends against the general public wearing them - instead, they should go to medical staff on the frontline.

And this week, a driver experienced first hand what can happen if these masks are not used properly...

A New Jersey motorist, who has not been named, crashed their car on Thursday after passing out while wearing an N95 mask.

Local authorities say the driver passed out behind the wheel after wearing the mask for several hours...

"The LPPD responded to a lone occupant single car motor vehicle crash yesterday. The crash is believed to have resulted from the driver wearing an N95 mask for several hours and subsequently passing out behind the wheel due to insufficient oxygen intake/excessive carbon dioxide intake," the authorities wrote.

The driver wasn't under the influence of alcohol or drugs at the time of the crash.

"We also know that nothing was uncovered at the accident scene that would suggest that the driver was under the influence of drugs or alcohol."

The vehicle crashed head-on into a pole...

And as you can see, a lot of damage was done.

The driver was then taken to hospital...

And treated for their injuries.

Things could have been a lot worse...

And some serious harm could have been done.

The crash serves as a stark reminder that masks don't need to be worn excessively by the general public.

Especially if you are driving alone in your car.

Hospitals are already strained as it is so they can probably do without having to treat people unnecessarily.

New Jersey police have no issued a warning following the incident...

While they don't want to scare anyone, they do want to urge people to avoid wearing the N95 masks while driving solo. For more like this, scroll on to read the story of a college student making masks for the deaf and hard of hearing...