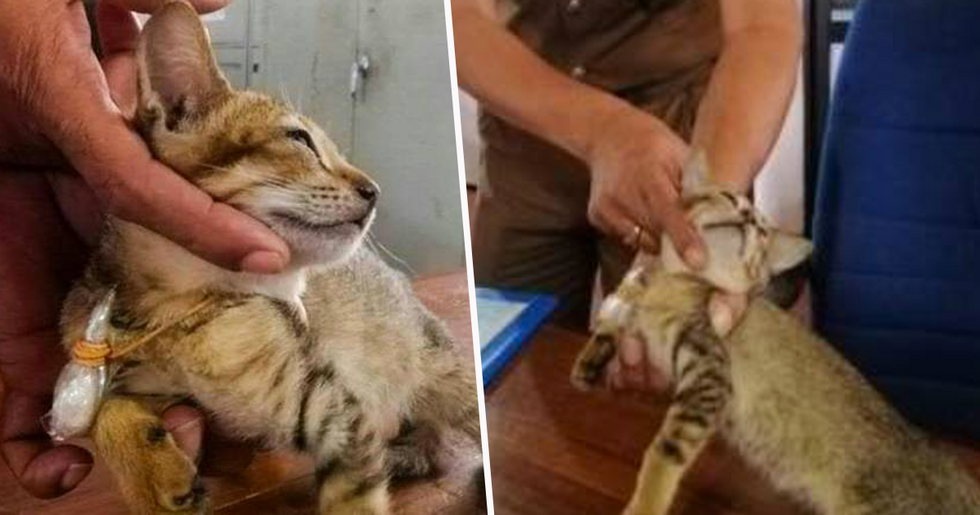 Cat Jailed After Being Found With Drugs Escapes From Prison

It seems a stray cat has turned to a life of crime after he was caught acting shady by the prison gates with something unbelievable in his pawssession.

And it seems that some even turn to crime as a way to survive...

And sometimes they find themselves on the wrong path...

Who found himself in a sticky situation when the cops discovered what was around his neck.

But something far more valuable.

It has been reported that a cat was caught with incriminating evidence in his possession.

Or should we say pawsession.

The cat was found carrying drugs and SIM cards.

And was being held at a Sri Lankan prison, before escaping, according to local media.

The cat who remains unnamed was found on Saturday...

...By intelligence officers at the high-security Welikada Prison.

It's clear the feline mastermind didn't come to play.

Carrying almost 2 grams of class A drugs, 2 SIM cards, and a memory chip around his neck in a small plastic bag.

He was being held in a room at the prison.

But just like any criminal mastermind, he managed to escape.

According to the Aruna newspaper, he made a run for it on Sunday.

As yet, his whereabouts are still unknown.

And prison officials haven't commented on the great escape.

But the cause seems pretty obvious...

The prison says it has seen an increase in people throwing small packages of drugs, phones, and chargers over its wall in recent weeks.

Last month alone was a record for Welikada Prison.

According to the Colombo Gazette, officials intercepted 38 mobile phones, 264 batteries, 20 SIM cards, and 3.5 grams of illicit substances in parcels.

The country is currently dealing with a major drug problem.

Fifteen people have been arrested in relation to the incidents.

At the moment, it's unclear how many cats have been involved.

For more crazy animal news, keep scrolling to see why three huskies became best friends with the most unlikely partner...