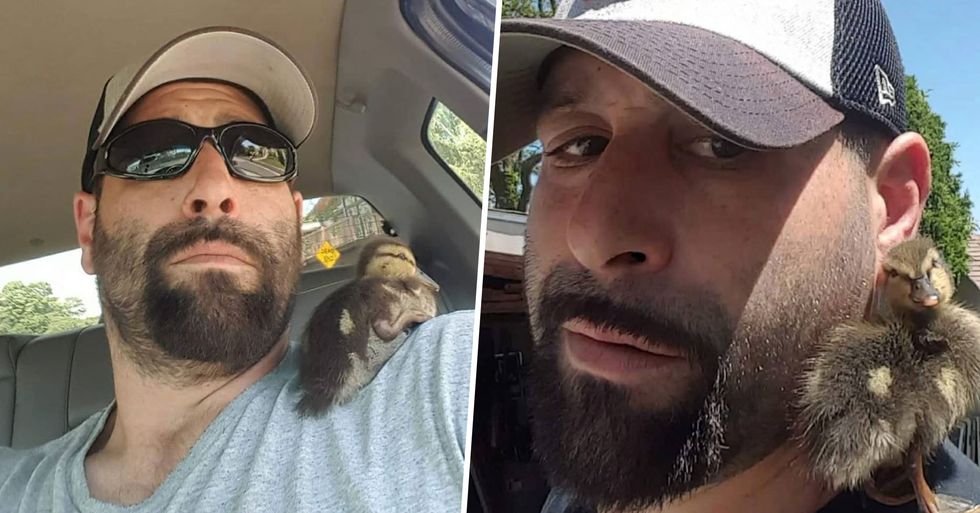 Taking care of an animal is hard work, but probably one of the most rewarding things you could do. When you bond, there's really no turning back.

As one man found out after he rescued a baby duckling. The pair are inseparable, which just goes to show that all animals no matter how small, remember acts of kindness.

Keep scrolling for their heartwarming story...

There's nothing as rewarding as bonding with an animal.

It's not easy being a parent to a fur baby.

Or any animal at that.

You just can't help worrying about them at all hours of the day.

Sometimes, parenthood finds you, even if you're not quite ready.

And when nature calls, you have to be ready to step up...

Which is exactly what one guy did.

Who found a baby duckling struggling in the water.

And the baby just won't leave his side.

It's proof that even the smallest of animals don't forget kindness.

Steven Thibeault from Massachusetts, first saw 'Cheerio' the duck when he spotted him struggling to swim.

In a pool at the apartment complex where he works as a manager.

And came to the conclusion that he wasn't going to be able to reunite the duckling with his mother and was too young to be on his own.

He decided to take Cheerio in.

Steven had planned to release Cheerio back into the world once he could fend for himself.

But it didn't quite work out that way, and a few years on, the two couldn't be closer.

He even accompanies Steven to work.

Cheerio spends his day flying around, swimming, and playing with other ducks in the apartment complex.

At the end of the day, without fail, Cheerio returns to Steven's home to his "cat sister" Reeses.

Despite being an unlikely pair of friends, according to Steven, they get on really well.

How cute is that?!

Steven has given an account of his usual day with Cheerio...

"He is pretty much on my schedule so we come to work, he spends most of the day outside and after work, we go home."

Cheerio has obviously imprinted on him.

"He does have a social life, he has spent time with other ducks which makes me happy, but at the end of the day he chooses me. That could change one day but that's up to him."

Cheerio is nothing short of a local celebrity in his home town.

Residents in Steven's apartment complex love showering him with treats and attention.

He's got feathered friends around the complex too.

Steven told The Dodo: "He gets along great with other ducks, especially males. He is a little shy when it comes to the ladies at this point in his life but hopefully, that will change.''

He really is living the life of luxury...

"He also hangs out with other duck and geese species like eider ducks, mallards and brant geese who spend their winters here in Nahant. He also has a few seagull buddies too."

Steven's has made it clear that Cheerio is free to go whenever he wants to.

But it looks like he won't be straying too far from his adoptive father for now.

Steven clearly has a friend for life.