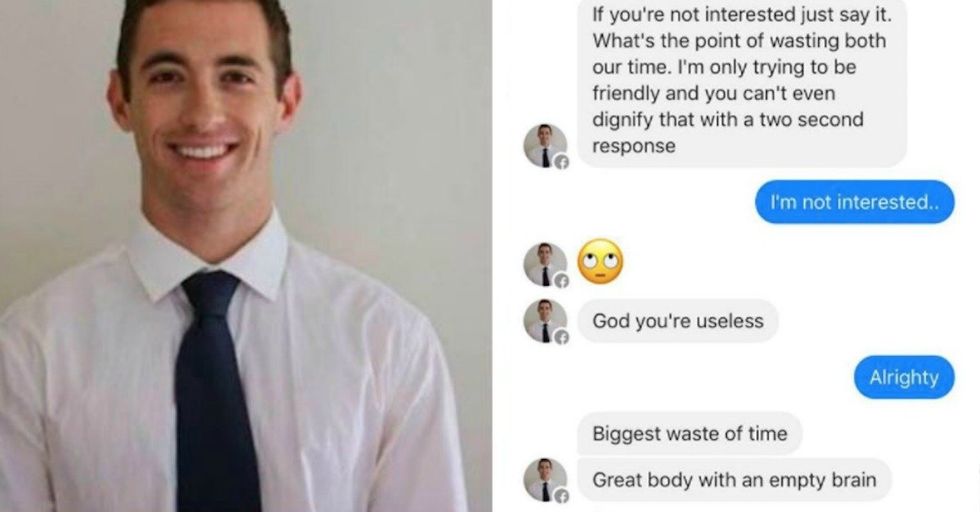 Dude Calls Out Ex-Friend For Sending Racist, Abusive Messages To Women On Tinder

Tinder is a crapshoot, meaning you never know what you're going to get. Sure, it can work out great, or you could end up with an abusive, racist jerk like our friend Nick here.

We're in a brave new world when it comes to relationships and dating, whether you want to believe it or not.

It's THE way younger people (and older people as well!) are connecting for hookups, true love, and everything in between.

The good news is: You can reach almost anyone based on interests and such.

The bad news: Almost anyone can reach you (at least prior to you blocking them), and there's no guarantee they'll be polite.

Sometimes the response are silly and goofy on purpose. Other times, they're completely out of line.

Fortunately, the latter are rare, which means that more often than not, you're in for a laugh to share with your friends.

But sometimes, things can get pretty creepy from someone you don't even know.

Even though the two of you are only connected virtually, it can still feel like a threatening invasion of privacy and a threat to your safety.

When one Tinder user matched up with another, things got bad.

Fortunately, one of the aggressor's friends was brave enough to blow the whistle on his terrible, terrible friend and keep the platform a little safer than it was before. See the positively baffling story unfold, and the sweet, sweet justice in the man's fall from grace.

Nick is twenty-four and was looking for a little fun on Tinder, but what he got was exposed, and not in the sexual way (that we know of).

A guy named Kevin went to college with Nick, and when he found out his former friend was being a racist, abusive jerk to women on the popular dating app, he decided he couldn't not tell people about it.

In a now-viral Facebook post, Kevin shared screenshots of conversations Nick had with a couple of women.

This one starts out innocently enough, relatively speaking.

But it escalates quickly when Nick became verbally abusive and racist to the woman who (understandably) stopped responding to his texts.

After sharing that original post, he heard from other women who had their own Nick story.

Yup, this guy Nick had a trail of destruction and abuse in his other Tinder conversations. You'll be shocked at what else surfaced.

Then there's this story from a woman who read the post and shared her own Nick story in the comments.

And then inspired by Kevin, another woman who was dragged by Nick shared her story on Facebook, proving he is quite the winner.

To summarize, Nick is a jerk and you most certainly should swipe left. Now Kevin? He sounds like a stand-up dude. That's how you do it, men.

Obviously, this wasn't a one-off incident. This was a guy who was preying on women.

Sure, it was "only" on Tinder and not in real life, but that hardly excuses his actions and the way he made countless women feel. He was a nuisance, a pest, and a racist.

Now he's off Tinder, and unless he shapes up (unlikely!), he'll be finding a lot of heartbreak and frustration trying this crap with women in the real world.

Score one for the men who look out for others and for those responsible for putting Nick in his place, which, if many had their way, would probably be in jail or some other heavily secured area.